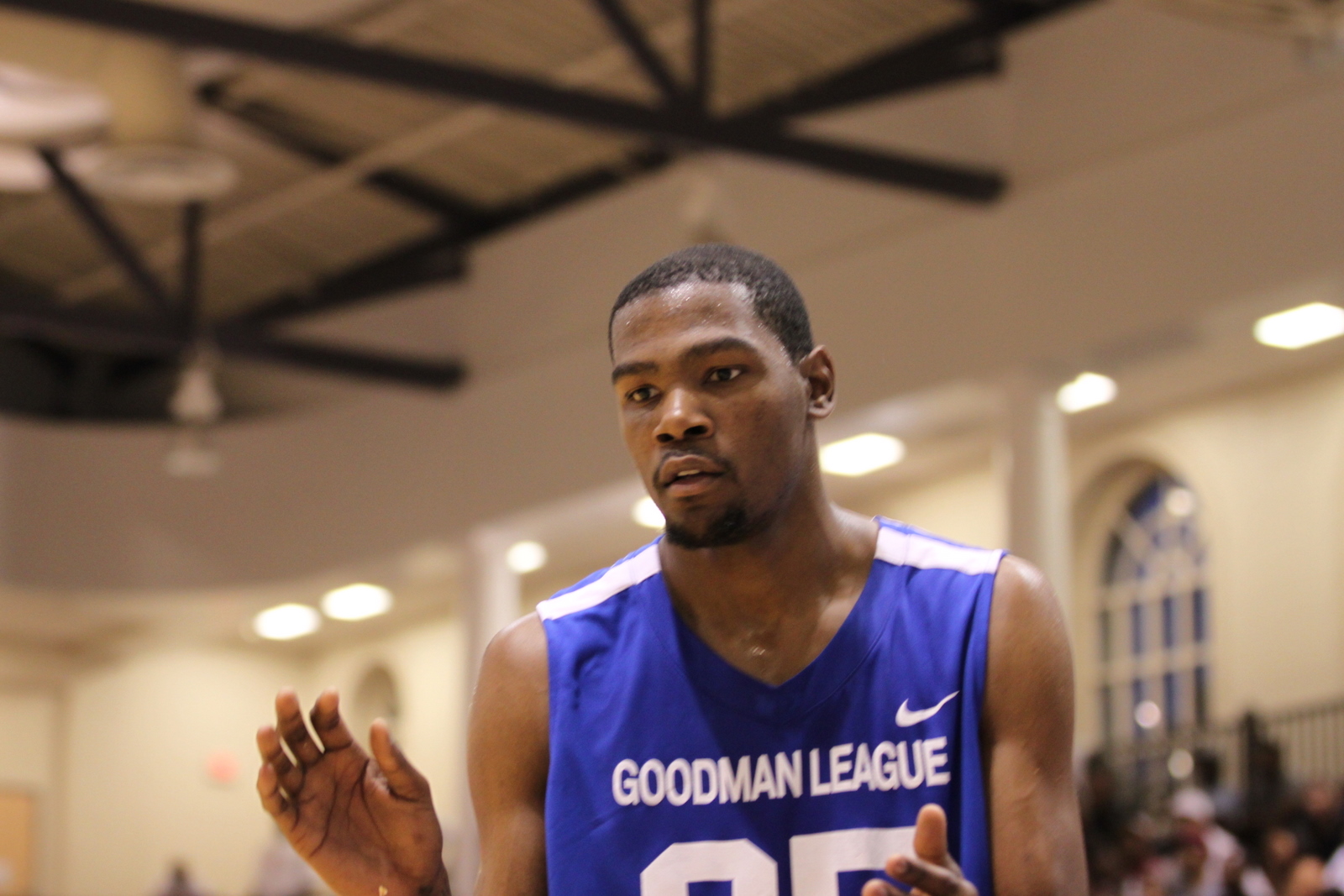 Kevin Durant is one of the best four players in basketball; he can shoot the ball from every level, he can dribble, he can rebound, he can block shots, he can pass the ball and is a good on-ball defender. In short, he is a true sporting superstar who can make a team great on his own, and so when his contract with the Oklahoma City Thunder came to an end this offseason every team wanted him to sign with them.

Due to the NBA’s new TV rights deal the salary cap is currently going through the roof and as a result star players who signed contracts a couple of years ago are now relatively cheap, allowing almost every team enough cap space to make a go at signing Durant – and most did. Then, after a weekend of meetings and discussion, Durant scheduled his announcement for the 4th of July. Most at this point thought that he would return to the Oklahoma City Thunder, with whom he had gone to the semi-finals last season where they had been up 3-1 against the Warriors, only to lose three consecutive games and therefore the series. The Thunder had already traded Serge Ibaka, a player who had struggled against the Warriors and who looked to be out-of-place in the ‘new NBA’ for rising star Victor Oladipo and a first round draft pick in an attempt to regroup for another title charge. Yet, come the day, Durant opted to sign a two year deal with the aforementioned Warriors.

For those who are not basketball fans (if any have made it this far) then you may be wondering why a star player going from a good team to a slightly better team is such big news; after all, it happens a lot of the time in most other sports. Part of the reason for this reaction is that US wage-capped sports have a much more level playing field financially than other major sports leagues and so the ability of a good team to add a star player in this fashion is significantly hindered and therefore is much more of an event when it does happen. Another more basketball-specific issue is that in no other team sport (at least the major ones) is so easily influenced by a single player. With only five people on the court at a time the addition of a star player typically marks a start improvement not seen in other sports. So how good can the Warriors be?

The Warriors were the highest scoring team in the NBA last year and had a particular focus on the three point shot and ball movement. Harrison Barnes (the player Durant will be replacing) averaged 11.7 points per game on thirty-eight percent three point shooting with 1.8 assists and 4.9 rebounds. For the Thunder last year Durant averaged 28.2 points on thirty-nine percent three point shooting with 5.0 assists and 8.2 rebounds. Those numbers would obviously make for a sharp increase but strategically they could be even greater. Part of the reason why Barnes was able to be as successful as he was for the Warriors was because teams were forced to leave him unmarked as they attempted to defend the Warriors big three of Curry, Thompson and Green. The addition of Durant would likely give them a big four thereby creating even better chances for the other Warriors players whilst also giving him easier shots due the improved supporting cast. What this all comes to is that the highest scoring team in the league has just added the league’s 3rd highest scoring player, and as a result both are likely to only become more efficient at scoring.

Not only did the Warriors lead the league in scoring, they also won more games than any other team in history and were 3-1 up in the finals before slipping to a 4-3 loss. With the reigning champion Cavaliers losing many of their rotation players to free agency and others starting to age the Warriors were already heavy favourites for next season before the signing of Durant. They are now at  4-5 to  be crowned champions in 2017 with the Cavaliers second at 4-1. Whilst some of this is pre-season hype and as we move towards the start of the season there will likely be moderate return to sanity it is almost impossible to see anybody else being better over the course of a season right now. So, with that in mind, should we be crowning them already, is it worth anybody else turning up next season?

Obviously there is the chance of injury, freak tornado etc. but even basketball-wise there are real reasons to doubt this Warriors team. Firstly, they are going to have to release, trade or simply not sign a significant number of players in order to afford Durant, even with the increases to the salary cap. Barnes, who was a good fourth or fifth option for the Warriors next year, will likely be gone as the Warriors will not be able to afford him, as will significant role players Andre Iguodala, Festus Ezeli and Andre Bogut. Whilst none of these players are of the calibre of a Durant the depth of squad was one of the reasons the Warriors were able to be so successful last season, and was one of their big advantages over the Cavaliers. Those four players combined to score 31.1 points per game last season as well as 21.5 rebounds, 8.2 assists and 3.2 blocks and whilst some of that production will be easily reproduced by cheap fill-ins that is not an irrelevant decrease in production. There is also the issue of who will be taking all these shots, Thompson, Curry and Durant are all volume shooters and with all three on the court at the same time there will be a decrease in opportunity for all three and so any projection of their scoring is simply that, a projection.

Even if one assumes that this team will be unstoppable (a big assumption mind you) then it is still somewhat unfair to be angry at Durant or the Warriors. Stephen A. Smith, a notable NBA analyst decried the move as the “weakest ever by a superstar”. While there is clearly to be argument to be made that a championship is cheapened, at least to some extent, by the formation of a ‘super-team’ there is certainly precedent for it in the past and it is after all better than no championship at all. After all, while he has since returned, Lebron James left Cleveland for Miami in order to form such a team with Dwayne Wade and Chris Bosh and went to four straight NBA finals. The reason why many allow James leniency for this is that the Cleveland team that he left was completely without surrounding talent and the management had consistently showed an inability to surround him with the necessary players to make a legitimate run at a title. This is clearly not true for a Thunder team that won fifty-five games last year en route to a Western Conference Finals appearance. However, there are numerous reports that Durant and his co-star in Oklahoma Russell Westbrook were struggling to get on and that Durant’s move was as much a departure from the Thunder as it was a move to the Warriors. If that is the case then should he be looking to move team who can blame him from going to the best one. Yes, he could have chosen to go to a weaker team in order o ‘legitimise’ any championship he might get but to say that failing to do so is weak is inconsistent at best. Players consistently sign with teams in order to maximise their chances of winning a title, so what is wrong with a star player doing exactly the same thing?

Albeit meandering, the conclusion that seemingly must be reached is that nothing is wrong with it. Durant has done what anybody would have done in his situation and pretending that there is some sort of higher nobility among athletes than the rest of the universe is farcical. This deal isn’t about money, the usual argument about players selling-out but about winning which is fundamentally what sport is all about. Losing is horrible whether you’re a seven year-old child or a professional athlete and Durant has decided he’d rather win, so anybody who praises the winning-is-everything attitude of players like Jordan or Kobe cannot criticise Durant for this. It is unlikely that the Warriors ‘super-team’ will be any more untouchable than the Heat team that lost two NBA finals despite the ‘big three’ or the Lakers team of Bryant, Nash and Howard that won nothing at all. So no, Kevin Durant hasn’t broken the NBA, he’s just broken Oklahoma’s heart.