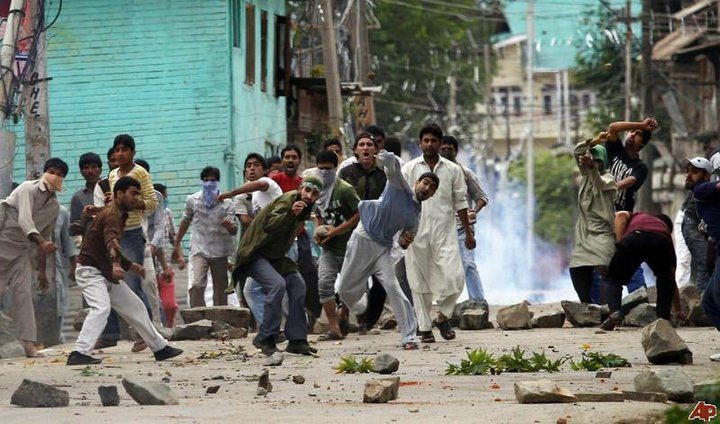 At one point in time, when beginning a conversation about flash-points in the world, one would turn immediately to Kashmir. That time is now gone. The conflict remains, but we don’t speak of it too much. It’s stale.

The Line of Control (the result of the 1972 Simla Agreement between India and Pakistan) currently divides the region into two parts – one administered by India, and the other by Pakistan. India wants to make this official, but Pakistan and Kashmiri militants have other ideas. Some of latter group support the accession of the region to Pakistan and others the rather impractical notion of independence – impractical because it is economically unviable, could cause instability (conceivably a balkanisation of the region), and will not even be considered or negotiated by the two countries involved.

In August 2014, Indian Prime Minister Narendra Modi officially accused Pakistan of waging a proxy war against India by supporting militant groups – a claim that Delhi has been furthering for years, and which is supported by some research into the working of terrorist groups like the Lashkar-e-Taiba, Hizbul Mujahideen, Harkatul Mujahideen and the Jammu and Kashmir Liberation Front (JKLF). The groups have either been linked to the Pakistani intelligence service ISI, have predominantly Pakistani members, or, in the case of JKLF, have had help from the Pakistani military regimes like that of General Zia-ul Haq (1978-88). Of course, Pakistan has been subject to tumultuous politics and oscillated between authoritarian regimes and electoral democracies, and so Islamabad today can and does deny this allegation.

Most people who know about the Kashmir conflict are aware of the 3 Kashmir related Indo-Pak wars (1947, 1965, 1999), and perhaps of those times that China dug its spoon in to share the already disputed desert, but few are aware of the daily battles that dominate almost every aspect of Kashmiri life.

I visited Kashmir properly for the first time in the summer of 2015. I went there with my paternal family to see what had become of the family home in the obscure Kashmiri district of Pulwama. The family was one of the many of the minority Kashmiri Pandit (Hindu) who were driven out of the region during the ethnic cleansing in the late ‘80s and ‘90s which was aided by the aforementioned terrorist groups. After all those years, and despite constant reassurance from the tourism industry that circumstances were on the mend, I could still cut tension with a knife at many instances during my visit there. My grandmother’s dejhor (a long earring that goes through the conch of the ear which is worn by Hindu Kashmiri married women) drew second looks from everyone on the street. Nonetheless, I am glad that we went when we did – one summer later, in 2016, it would be inadvisable to even step upon Kashmir’s periphery.

On the 8th of July 2016, a man called Burhan Muzaffar Wani was killed in an operation planned by the Jammu and Kashmir Police and the Rashtriya Rifles, a branch of the Indian Army. He was a commander of the Hizbul Mujahideen, a new-age terrorist group. He was not afraid to disclose his identity, had a substantial following on social media and was particularly popular amongst frustrated Kashmiri youths. Following his death, there was an outbreak of protests, clashes, attacks on security forces by mobs who stole weapons from police stations, stone pelting, renewed lashing out against the tiny remaining population of Kashmiri Pandits, and calls for a complete shutdown of the region by militant groups. Understandably, the most internationally controversial part of this unrest was the response of the Indian Armed forces to the public’s actions. There were instances of open firing at protesters, and the use of pellet guns will lead to blindness for 117 civilians, according to local doctors. In total, 60 people have died, including 2 policemen, and 11,000 people (4,000 of whom are security personnel) have been injured. Curfews are still in place.

I understand that one man’s terrorist is another man’s revolutionary, but my sympathies for men like Burhan Wani and groups like the Hizbul Mujahideen, if such sympathies exist at all, are severely limited. They are not great men. They are terrorist militant groups that resort to violence, hand young men guns, radicalise them and ruin their lives almost always irreversibly.

On that trip to Kashmir, we never found the family home. It had been demolished a few years ago. However, we found a person that my father recognised – a woman who used to take care of him when he was a child. The reunion was an emotional one, and we were invited into her house for lunch. Midway through the meal, she began to speak to my father about her eldest son – a quiet man seated next to me – and told him in Kashmiri that he was a rehabilitated militant. My lither chhamman (Kashmiri yellow cheese) froze mid-air on its way from the plate to my mouth.

In his youth, provoked by some members of one of these aforementioned groups, he had crossed over to a region that Pakistan refers to as Azaad Kashmir (Free Kashmir), and that India refers to as Pak-Occupied Kashmir, to pick up arms against the forces. After that, his life – and that of his family – became a living hell as they were caught up between the militant group and the Indian Army officers who would constantly question them about his whereabouts. Eventually, the man surrendered in a time of amnesty and was rehabilitated by the Indian government. However, this was not before he had lost many years of his life, damaged many parts of his body, and reached a physical state that required him to constantly be injected with medication. Apparently, he was one of the lucky ones.

The militant groups don’t have the best interests of the people in mind.

The militant groups don’t have the best interests of the people in mind. Their game is a political one, and they are capitalising on the resentful attitudes of the Kashmiri population. These attitudes do not stem from nothing – the economic dilapidation of a valley that used to be the favourite honeymoon destination of the Indian Subcontinent is heartbreaking. Poverty and lack of opportunities for professional progress are pervasive. Naturally, the youth is vulnerable to radicalisation – but the fact of the matter is that the groups which offer the solution of taking up arms are a part of this problem. They refuse to let the conflict settle; they speak of self-determination, but spread fear among those who encourage violence against minority groups. They foster the idea of an independent Kashmir that has no space for those Hindus and Sikhs who were driven out of their homes. They have no fleshed out, practical ideas that will make independence lucrative for the people of the region. They are the main cause of the extensive militarisation of the region.

This is not to excuse the actions of the Indian government. What kind of an insecure regime shoots and blinds its own civilians? Not one that I want to be governed by. Surely, this is the sentiment of the people in Kashmir too. The government continues to damage and alienate them, and so their failure it two-tiered. Not only did they fail to anticipate the obvious – that they would face great backlash once Wani died – but their army is not being trained to properly deal with civilian uprisings. The government continues to deploy more forces in the region, misdirecting resources that could instead be invested in non-lethal means of crowd control.

Ever since the start of the insurgency, violence against civilians from both sides has been harrowing. The militarisation and constant vigilance frustrate civilians. Wani allegedly joined the militants after feeling absolutely humiliated because some members of the security forces in Kashmir beat him up arbitrarily as a teenager. The cycle is a vicious one, and it isn’t going to be solved by the means that the Indian government continues to operate by. It’s difficult to estimate how many more Burhan Wanis will be born as a result of the recent clashes, the violence of which have made India look more like the occupying force it is claimed to be than a legitimate government.

Kashmir bears wounds inflicted by those who continue to pursue selfish interests, and the atmosphere is fragile. Without firm international political will, I doubt these facts will change.

The media’s coverage of Kashmir seemed to end in January 2016 with the death of the Indian state of Mufti Mohammed Sayeed, Chief Minister of the Indian state of Jammu and Kashmir. Yet so much has happened since then – some of it has made the papers, but it’s fair to say that the sporadic nature of reports surrounding the latest developments in the conflict have made them difficult to stumble across in news Trumped by the west. Kashmir bears wounds inflicted by those who continue to pursue selfish interests, and the atmosphere is fragile. Without firm international political will, I doubt these facts will change.