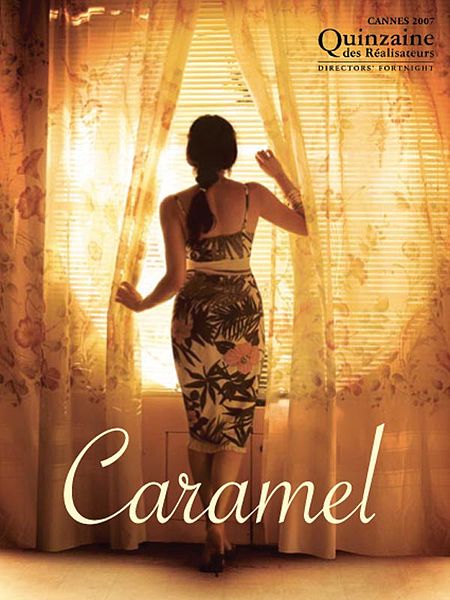 Relationships are complex at the best of times; most films struggle to depict a single relationship in a way that feels fair and realistic. Lebanese director Nadine Labaki rises to this challenge with a delicate and very successful approach. Her film Caramel (2008) seamlessly presents the lives and myriad relationships of a whole group of women. By providing short, sparse, and identifiable peeks into the lives of these women, the audience is coaxed into filling in the blanks of a host of friendships, family loves and dramas, workplace solidarities and rivalries, romances and heartbreaks. And if that wasn’t enough, Labaki gives a rare, touching and sensitive perspective on the care relationship between an elderly mentally ill woman, Lili, and her sister and carer, Rose.

The relationship between Lili and Rose is built on implicit compromise. Rose juggles taking care of her sister with providing for them through her work as a seamstress, and trying to have some semblance of a social or romantic life on top of that. Lili spends her days collecting scraps of paper from the ground near her home, which she protects as fiercely as if they were letters from a long-distant love, in one scene even bringing her into conflict with a local policeman. She rewards her sister’s efforts with tantrums and ill-timed outbursts — possibly in reaction to the constaints on her own life created by her dependence on Rose. Yet her consciousness of her dependence on her sister’s patience is highlighted when her shouts turn to sweet calls for Rose’s attention through a locked door late in the film. The tension in their relationship peaks as Rose struggles to balance it with a budding romance.

By hinting at the compromises forced on both of these characters, Labacki avoids turning either into a ‘subject’ or ‘object’ in the relationship

By hinting at the compromises forced on both of these characters, Labaki avoids turning either character into a ‘subject’ or ‘object’ in the relationship. Watching the film, we are presented with two full lives, with two distinct histories and needs and wants. Circumstances have pulled these lives sharply together, but neither has become distinctly subordinate to the other. Yes, Rose makes sacrifices for her sister, but this is neither portrayed as entirely selfless and angelic nor reluctant and forced. And Lili’s personality extends far beyond her needs surrounding her difficulties.

This balance and complexity in the presentation of their relationship is arguably helped by the fact that it’s far from the main focus of the film. There is no heavy-handed point being made, and the audience is given space to make of the relationship what they will. Lili’s disability is not turned into a stick with which to beat a message into the viewer. There are no dramatic tragedies or miracles involved; instead it begins to feel like one of many parts of a life. In fact, as a relatively small part of the film, it is given room to be meaningful to those who will recognise and identify with aspects of it, without needing to explain too much to anyone else.

Care relationships often arise from family or other personal relationships. Without becoming the entirety of someone’s life, being a carer does change people’s lives. With funding for disabled people and disability services cut in recent years in the UK, charity Carers UK states that 44% of carers are struggling to make ends meet. As every carer’s experience is different, it is vital for discussions of caring not to be overly simplistic or essentialising. Caramel provides a window into the kind of experiences this might involve, without claiming to offer anything more than that.

While care relationships are not uncommon, they are relatively rare in film — and even rarer when presented in the context of a broader network of people and lives. Without being a film about disability, Caramel tells a story of disability and care which is funny, sensitive, insightful, and delicate. Disability and care are neither the centre of attention nor made into an elephant in the room. No filmmaker can judge these kinds of relationships, and Labaki does a wonderful job of avoiding that temptation, to all of our benefit.