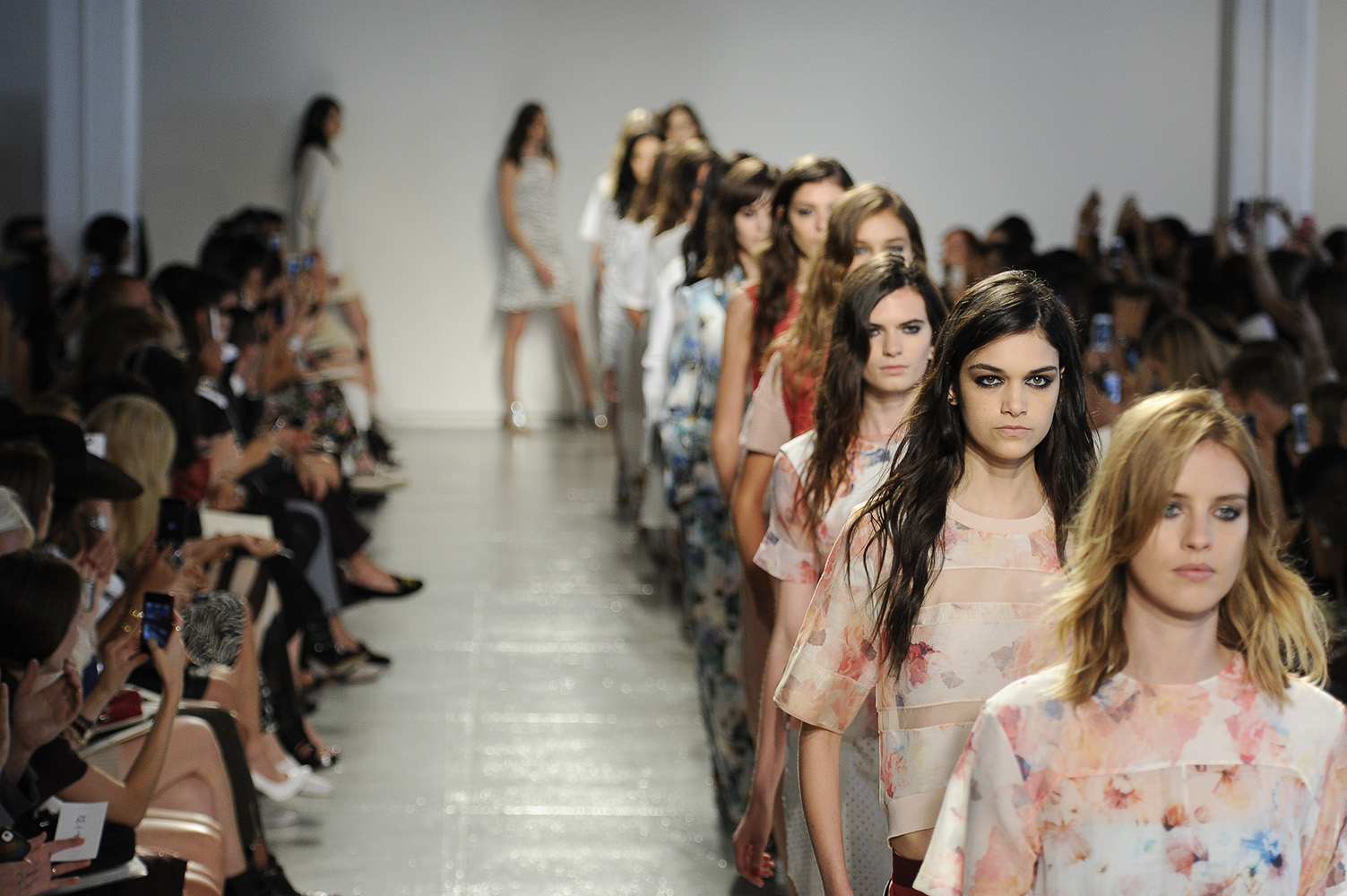 The Clothes Horse: blurring the lines between fashion and the body

At last month’s New York Fashion Week young women wearing Dolce & Gabbana, Fendi and Adam Selman shimmered their way down the catwalk in mirage effect, high shine dresses. Velvet fabrics shaped plush, flowing silhouettes in the Alberta Ferretti and Giorgio Armani shows. Extra-long sleeves defined the movement and motion of the clothes worn by models at Vetements and Marc Jacobs. Inexhaustible is the list of shapes, textures and fabrics, chosen by designers of the AW16 collections, which exaggerated, distorted and altered the nature of the human form.

Such aspects of fashion create idiosyncrasy, visual appeal and interest. Haute couture often faces criticism on the grounds of its impracticality. Instead of questioning the function of this sort of clothing, it is worth asking whether the way it corrupts and exaggerates the human form actually increases its value.

Instead of questioning the function of this sort of clothing, it is worth asking whether the way it corrupts and exaggerates the human form actually increases its value.

Great attention was recently focused on the bodies of models involved in catwalk shows. In December last year, the French government banned the employment of models deemed ‘excessively thin’ on the basis of objective medical parameters, such as BMI (Body Mass Index). Italy, Spain and Israel have adopted similar regulations. The AW16 catwalk season reflected the change in attitude and showed a new appreciation for the diversity of the human body.

The AW16 catwalk season reflected the change in attitude and showed a new appreciation for the diversity of the human body.

Designers such as Rachel Antonoff, who used to stick to more traditionally rigid size ranges, are now expanding them. At New York Fashion Week, Addition Elle advocated the hashtag #FashionDemocracy and collaborated with the famous “plus size” model Ashley Graham to promote a line of lingerie designed to suit women of all shapes and sizes.

Exploiting the individuality of a model’s body is not an entirely novel idea. In 1966 the Spanish designer Paco Rabanne’s collection entitled ’12 Unwearable Dresses in Contemporary Materials’ was constructed entirely from metal, plastic, leather and paper. For the metal dresses especially, Rabanne had to build the dresses onto the model, moulding it to the form of the individual body as he went. Coco Chanel famously commented: “He’s not a couturier, he’s a metal worker.”

Alexander McQueen’s SS13 collection, inspired by wasps and the insect-like printed fabrics of earlier collections by McQueen himself. Lacquered lace, organza and patent leather drew attention to the bodies of the models, using their shape to enhance the designs. Sarah Burton said of the collection: “it’s about sensuality and skin but not nudity”. She continued, however: “we wanted the clothes almost to hover over the women who wear them.” This is where the more recent changes become apparent. Whereas designers at McQueen in 2013 still saw the body as merely a vehicle for clothes on the catwalk, a tool to add “sensuality”, more recent designs from other fashion houses see the body as a more equal partner. The body enhances the clothes, but is very much visible and present.

The human body is the stage on which fashion is meant to perform.

The human body is the stage on which fashion is meant to perform. It becomes a scene of contradictions, however, when designers demand a “size zero” body but seek to distort that same figure. Bodies lose their own identity, and only the clothes draped over them are deemed to be worthy.

This catwalk season has shown, however, that designers are beginning to recognise what the human body can add to their creations. Distorting fabrics, such as velvet, derive part of their beauty from the way they move when worn. The same is true of many of the textiles and shapes that have grown in popularity this season. The increased use of fabrics and designs that are enhanced by the mere act of being worn suggests that the model is no longer just a clotheshorse.

Haute couture’s often highly elaborate designs have the potential to appeal to people of differing sexuality, body shape, size and race because they are made even more interesting by the individuality of those who wear them. When the body and the fabric work as a pair, as was the original purpose of fashion, the final effect is inevitably compelling, engaging and powerful.