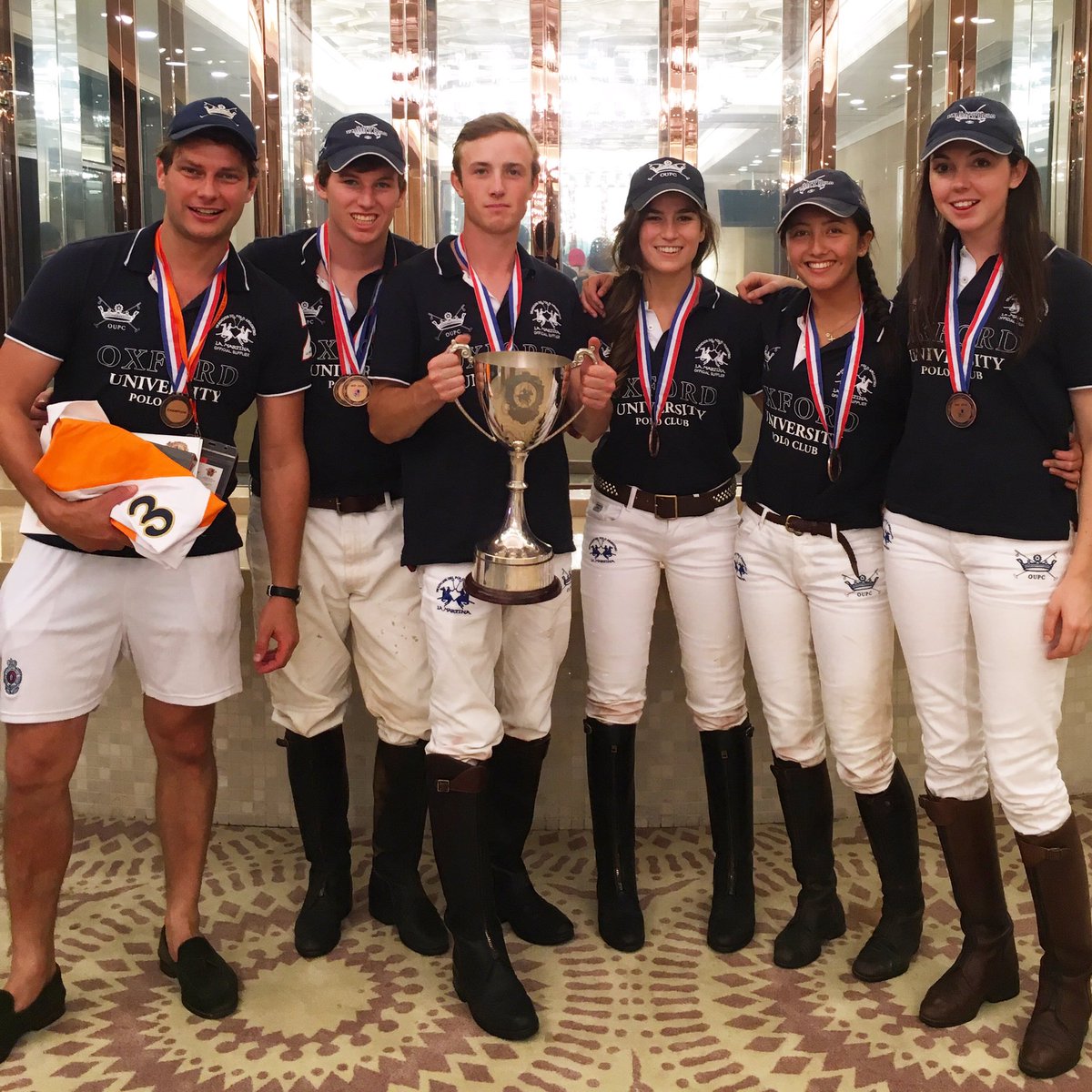 Founded in 1874, thereby making it one of the oldest polo clubs in the UK (the title of the oldest is disputed with Cambridge) it has always been difficult for any one season to stand out for the Oxford University Polo Club. However, with an historic victory against Cambridge in the varsity match and victory in the International Intercollegiate Challenge the 2015-16 edition of the club will likely have done just that.

Whilst obvious for some, it seems wise at this point to briefly explain how polo works. A polo game is played between two teams with four players on each side. Like most ball sports the aim is simply to score more points than the opponent. The field itself is three-hundred yards long and one-hundred-and-sixty yards wide (the equivalent of nine football fields) with goals at each end, spaced eight yards apart. Players carry mallets and attempt to hit the ball through the goal posts with each goal counting one point. The ball, of hard white plastic, is a little over three inches in diameter and can travel at speeds up to one-hundred-and-ten miles per hour. The game is usually played for six ‘chukkas’ (name given to one period of play) of seven-and-one-half minutes. At university level, however, the game is limited to four chukkas.

OUPC is mixed and the list of alumni includes such notables as Claire Tomlinson, a former world number one, and Winston Churchill himself once came over from Blenheim to play with and coach Oxford’s Varsity team, “giving them a good gallop and a pipe-opener” before the Varsity Match. Despite being such an old and prestigious club OUPC receive no formal coaching but instead is organised by team captains Charlie Hitchman and Louis Maddison. This is in contrast to much of the competition, especially the international teams.

The varsity polo match has been going since 1878 and is the oldest in the western world. This years was held at the Guard’s Polo Club and with Oxford leading the series 61-57 going into the year the pressure was on to come away with another win to extend the lead. The team did just that winning 19-0, the largest winning margin the in the history of the varsity match, breaking a record set all the way back in 1911. Star player George Pearson, who has since gone on to play at the Gold Cup this summer, led the way for a team where all players possessed strong handicaps of above zero. As ex-chairman Hamilton stated; “Right now OUPC is in a type of golden age. By luck of the draw OUPC has an all-star Varsity team with three 0-goalers and a 2-goaler who have played polo all their lives.”

Following on from this, OUPC travelled to the Metropolitan Polo Club in Tianjin, China to take part in the International Intercollegiate Challenge, going head-to-head with the likes of Cornell, Harvard and (once again) Cambridge. The team saw some changes from the one that faced Cambridge in the varsity match with Heather Windsor and Sally Schwartz joining Charlie Hitchman and Louis Maddison.

Having already defeated London, Cambridge and Skidmore in the earlier rounds, Oxford were able to continue their run of good form with a 4-2 win over Harvard in the semi-finals meaning they faced Cornell in the final. Oxford started the game with a 0.5 point advantage due to handicap and with scoreless early-going that was how the match was entering the second chukka. Maddison scored twice and Hitchman once to give Oxford a 3.5-0 lead but Cornell scored twice to make it 3.5-2 at the half-way point.

The third chukka started eventfully when Hitchman, having shot just wide of goal, went careering into the goal post and was flung unceremoniously from his pony. After being treated by medical staff he was able to re-mount his pony and continued playing. No sooner had the match re-started than he scored on a shot from distance after tearing down the left flank. A brace from Maddison matched by two from Cornell has the score at the end of the third chukka at 6.5-4 in favour of OUPC.

The final chukka passed uneventfully save for another goal by Hitchman in the dying seconds to put the game beyond doubt. This gave Oxford a 7.5-4 lead which they maintained until the end to win the championship. Not only did they manage to do this undefeated, but every other team lost at least two games.

All in all, this season has been undoubtedly the finest season in OUPC’s recent history, arguably in its entire history. Going forwards OUPC wants to be able to extend its membership and has put a real focus on increasing the inclusivity of the sport. “Our goal is to make polo accessible to all students so they can get a taste of this fantastic sport,’” explains chairman Patel, “that is why it is so important to us to secure as much sponsorship as possible so that we can subsidize the sport for any student who wants to play.” If you are interested in joining OUPC or simply giving polo a go please check-out our website at oxforduniversitypoloclub.com or contact us by e-mail at polo.club@studentclubs.ox.ac.uk. No experience of either polo or riding is required!