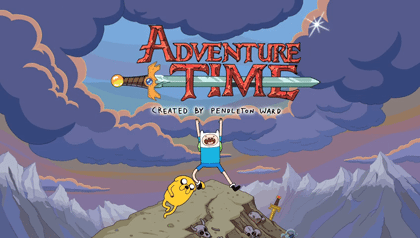 Hello! I’m back again this week to talk about more queer representation in children’s media.

If I could write my dissertation on Adventure Time, I probably (definitely) would. Although I’m here to talk about the show’s portrayal of trans characters and the romantic relationship between a bubblegum princess and a vampire queen, Adventure Time is also full of such complex topics as mental health, Alzheimer’s and its effect on family members, and treating your partner with respect. Through a high-fantasy metaphorical world, it’s able to approach these subjects with a difficult balance of humour and poignancy.

Let’s begin with a robot called BMO. Throughout the series, BMO subtly but frequently switches between ‘he’ and ‘she’ pronouns while other characters sometimes refer to BMO as a ‘lady’ and other times as a ‘boy.’ BMO’s genderfluidity is unquestioningly accepted by everyone, making its inclusion even more remarkable.

In a darker episode, an anthropomorphic cookie with a masculine voice is troubled because he wants to be a princess but had been laughed at. In a shocking moment for a children’s show, the cookie attempts suicide, smashing into pieces but surviving. The episode ends with the cookie recovering in hospital, where talking dog Jake gives him a crown and refers to him as Princess Cookie, accepting his identity. This forms a powerful metaphor for mental health in trans individuals.

Finally, there’s the all-but-explicit portrayal of romantic feelings between Princess Bubblegum and Marceline the Vampire Queen. Although they have not kissed, the cartoon has increasingly made them blush in one another’s presence and even included a scene in which Bubblegum wakes up in the t-shirt Marceline gave her, deeply inhales it, and then looks at a photo of the two of them stuck to her wardrobe. This is interweaved between their many other storylines which have developed over the course of the series.

So if you can squeeze a twelve-minute episode into your day, try watching Adventure Time. Most episodes are not continuous in storyline, so it’s relatively easy to pick and choose what you want to watch. The show has been announced to end in 2018, so catch up before the last episodes come out!