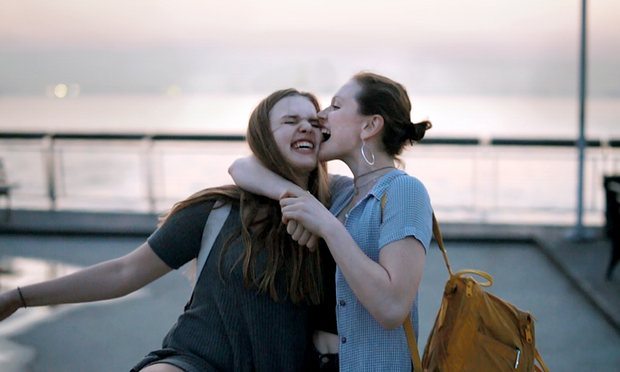 Review: All This Panic

‘There’s all this panic,’ says Delia, scrolling through her phone the day before the start of a new year of high school. Her messages are a stream of carefully-chosen outfits as her friend tries to figure out which to wear tomorrow. It’s a thread of panic that runs through the experience of teenage girls: how to represent yourself, how to situate yourself within representations of girlhood, how to carve out a space that is both acceptable and authentically your own.

I’m at the London Film Festival watching All This Panic, a documentary made over three years which follows seven girls in New York City. It began, says director Jenny Gage, with sisters Ginger and Dusty: living on the same street, she would see them walking to school with ever-changing hair colours, wrapped up in their own secret world. She decided, ‘I have to know what’s going on with these girls.’

And she did. The film is strikingly intimate, all close-ups and delirious soft focus and hundreds of hours spent following the girls around, camera never moving from them. What emerges are fragments of inner lives rarely represented on screen, rarer still taken seriously. ‘The teenage body is so sexualised. People want to see you but they don’t want to hear what you have to say,’ says Sage, speaking carefully as she sits cross-legged on her childhood bed.

The film’s greatest grace is that it makes an attempt to represent a girlhood that is not only tender and insightful, but messy and confusing

Film in particular loves to see teenage girls, but less to allow them complex internal lives. Growing up, the girls of Skins and The Virgin Suicides and Lolita were my guardian angels: I watched them like they were real, like every move they made was a clue about how to be. Girlhood was performed from the outset. My choices were between the wholesome and studious Rory Gilmore and the wild-eyed girls of Thirteen. To be both, to express a subjectivity that was complex and personal and would never live up to the glittering girls on the screen, never occurred to me.

Cinematographer Thomas Betterton explains how he stripped away the performance, letting the girls tell stories to the camera and perform until they had exhausted themselves and all that was left was honesty. The result is a narrative that feels like a rebellion against the archetype-ridden landscape of teen girl mythology. The film runs past you, catching you up in the rapid adolescent pace of trying on new hopes and dreams and identities with shades of hair dye (‘It’s also a film about hair,’ jokes Gage).

Talking on Instagram, Ginger tells me about the first time she saw the finished film. ‘I nearly got kicked out of the theatre because I was literally yelling at younger me on the screen like “No! What’re you doing? Why did you say that?”’ This is the film’s greatest grace. It makes an attempt to represent a girlhood that is not only tender and insightful but messy and confusing and embarrassing and panicked, and takes all of it seriously—and rightly, because there are few things more serious than being a teenage girl.