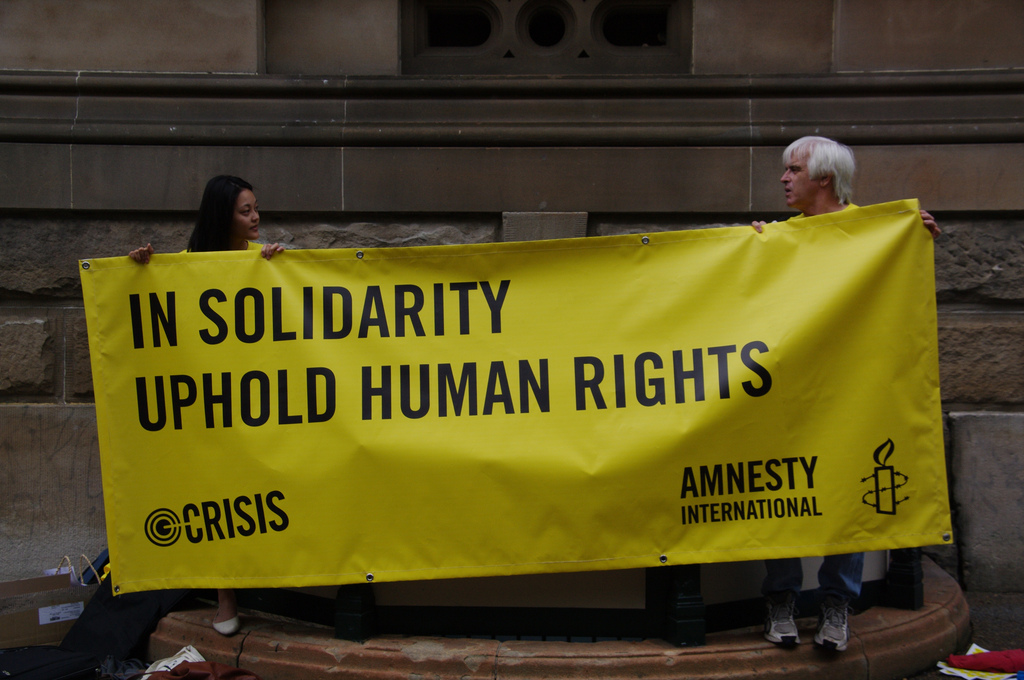 At the start of a new term, many wide-eyed students will be considering what they can do in their spare time at Oxford. Charitable organisations and societies are one way students can make a difference. I spoke to Sarah O’Grady, who has just stepped down as chair of Amnesty International UK, about human rights issues in the UK and her advice on what students can do.

How did you get involved with activism?

My first clear memory of feeling outrage at injustice was at the age of 8 and I vowed that I’d never forget what it felt like. This was reinforced by travelling behind the then Iron Curtain as a teenager. As a student I joined a demonstration and felt the power of activism.

Would you discourage students from going straight into non-profit organisations, and gain experience like you did first?

Not at all. All sectors should learn from each other and the path to take depends on the role you want. For me, my skills and experience were very valuable in carrying out my voluntary leadership and governance responsibilities and bringing change.

What did you enjoy the most about being Chair?

It was all a privilege, even in the most challenging times. When I became Chair at very short notice, the organisation was in internal crisis. I’m very proud to have led the transformation of its governance, to have opened up the democratic decision-making to all members and to have enabled difficult discussions to have taken place in a more constructive way.

It was a particular privilege to meet dedicated and brave human rights defenders in the UK and from AI globally. I was continually inspired by them.

What is the biggest issue for the UK concerning human rights?

It is difficult to choose one, so I’d say the humanitarian crisis caused by the situation in Syria; the proposal to abolish the Human Rights Act; ensuring that respect for human rights is central in UK’’s Brexit negotiations; making a stand on hate crimes and racism, which have surged upwards since the EU Referendum; and risks to free speech brought by mass surveillance.

How  can we begin to resolve these issues?

Keep up the pressure on the government by letting politicians know your concerns through supporting AIUK’s campaigns.

The government has confirmed plans to repeal the Human Rights Act and replace it with a British Bill of Rights. Are you concerned about this, and if so why?

Many of the freedoms which we take for granted weren’t protected in UK law until the HRA incorporated the European Convention on Human Rights into UK law. The rights (and responsibilities eg. free speech carries with it a responsibility not to incite violence) protect us all. Whilst it is not clear what the Bill of Rights will contain, there is concern that it will reduce the existing rights, otherwise, why change in substance and/or its name? It also sends a very negative signal to the world; how can the UK effectively call for an end to human rights abuses if there is a failure to commit to them at home?

What role does Amnesty International UK play on a global stage?

AIUK is part of an independent worldwide movement of over 7 million people. It is proud to be one of the largest Sections and to support the growth of the movement globally, especially in places which are closer to where the worst human rights violations are taking place.

AIUK contributes to the Strategic Goals of the global movement and campaigns (such as the recent Stop Torture Campaign) and works on human rights issues in the UK.

The global refugee crisis is reaching a new high. How do you think we should tackle this?

From a human rights perspective, Amnesty is calling on the international community to share responsibility. The UK Government should play a leading role in finding global solutions that ensure the safety and protection of refugees and fulfill its humanitarian commitments.

AIUK activists are not only campaigning; some Groups have successfully persuaded their Councils to accept Syrian refugees and are taking practical steps to provide support and make them feel welcome.

Hate crimes have also alarmingly increased over the past few months. What is Amnesty International UK doing about it?

Within days of the reports of hate crime and racism increasing following the EU Referendum, AIUK launched an emergency campaign, including to conduct research into the issue and calling on local authorities to condemn such abhorrent actions and ensure all local bodies and programmes have the  support and resources they need to fight and prevent them. Activists responded swiftly to lobby their councillors.

What advice would you give to students interested in activism and charity work?

Charities play a key role in UK society and activism plays a key role in achieving change. Choose  causes which you feel passionate about. You’ll be with like-minded people and will find it personally more rewarding and fun!

A lot of not for profit organisations are taking positive steps to encourage students to contribute to their  work, leadership and innovations. Taking part would enable you to contribute your skills and ideas as well as giving the opportunity to develop new skills. Don’t be put off volunteering by concerns re the time commitment; choose a level which is manageable for you.

Student Groups are at the heart of AIUK’s work and I’d encourage you to join the fabulous, active Oxford University Amnesty International Group.

Having recently stepped down from Chair of Amnesty UK Section, what do you intend to do next?

I’ll help not for profit organisations improve their governance and conflict management, support and develop those in leadership roles and resolve disputes as an independent third party. Voluntary work continues, including for the Amnesty global movement, and I also have more time for my other passion: the environment.