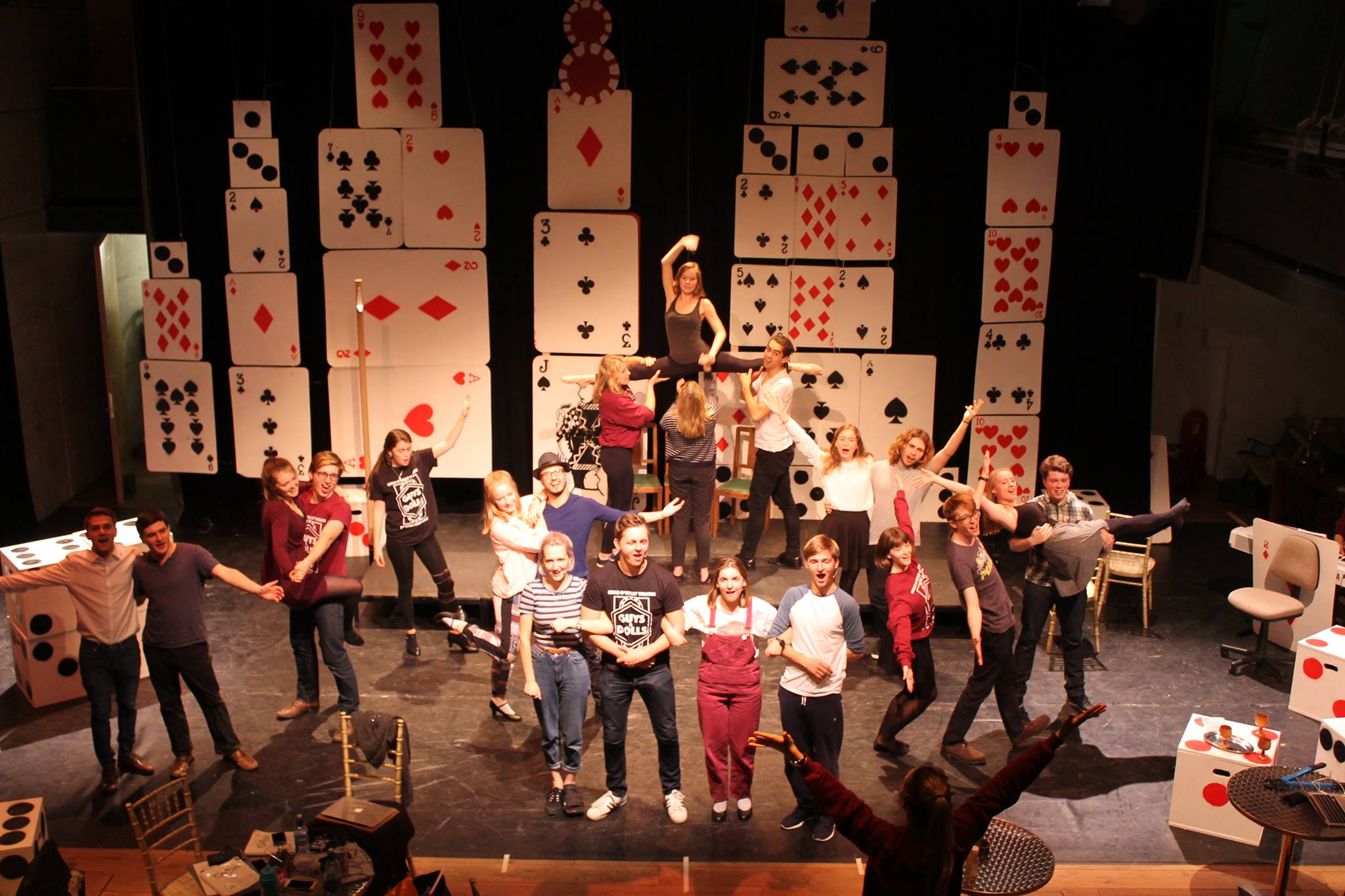 Guys and Dolls: An Abundance of Energy

As I walked into the midst of this rehearsal for Guys and Dolls the energy in the room was palpable. Everyone seemed to hold an intense enthusiasm for the show and I knew that I was about to see something special. Guys and Dolls is a big-time musical set in depression-era New York City, following the lives of gamblers and their girls. It is centered around the relationships between Sky Masterson, an enthusiastic gambler, and Sarah Brown, a straight laced missionary, as well as that of Sky’s fellow gambler Nathan Detroit and his fiancé of 14 years, Adelaide. The combination of romance and comedy in this classic musical makes for something delightful.

The chemistry between the cast seemed to be a crucial element of this musical’s appeal; a scene I witnessed between Adelaide, played by Emelie Finch, and Nathan, played by Laurence Belcher, illustrated this perfectly, the characters interacted with such ease and it was a true joy to watch. For me, the stand out performer had to be Emelie Finch as Adelaide, both charming and hilarious, I feel this character could steal any scene in which she made an appearance. Impressively, it is not just Finch who seems to have cracked the comic elements of the musical; a scene of testimonials involving much of the cast revealed that an ability for well executed comedy was a skill possessed by many of the actors.

The combination of romance and comedy in this classic musical makes for something delightful.

Not only are the cast of this production wonderful actors but they also have a great musical ability. Guys and Dolls boasts a large variety of musical content, from big band numbers to romantic duets and this variety making the show an interesting watch. The cast have been drawn from a number of different musical backgrounds, including choral and acapella singers; their ability to handle the wide variety of musical numbers involved in Guys and Dolls is a testament to their own skill. I must mention the voices of Gemma Lowcock, playing Sarah, and Eoghan McNelis, who plays Sky, which came together beautifully in the number I watched them perform together. I only wish I had been able to hear the performance of the live band, who will be a central part of the show, as I watched these preview scenes.

The set design is simply another impressive attribute of this production.  A New York skyline constructed out of massive playing cards loomed throughout the preview and was a remarkable sight. Still, one of the most exciting aspects of this production has to be its innovative seating arrangements. Audience members will have the opportunity to sit at tables amongst the actors, where they can watch the show and even be served wine throughout. For the audience to feel as if they are truly at the Hot Box Club adds a really fun, immersive element to the whole show, this is not just a musical but an experience. Unfortunately, for those of you who have not been able to grab table tickets as of yet, they have now sold out. However, there are still tickets in the available in standard seating in the stalls and, from what I saw at this preview, it is imperative that you buy one now. The distinct passion that radiated from the cast and crew is what makes this musical makes it unmissable. I think it undoubtedly has the potential to sell out.