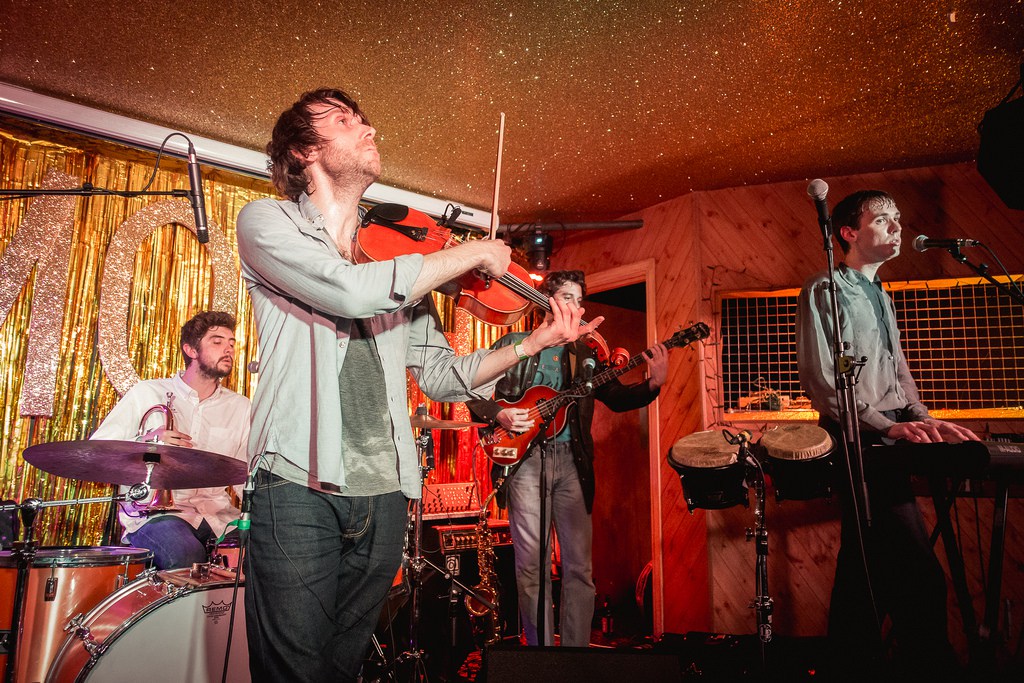 If, like most people, you don’t consider yourself to be a fan of baroque instrumentation and crooning theatricality, Meilyr Jones’ style can at first seem off-putting. However, playing live in an intimate set at The Bullingdon, Jones’ assuredly original vision makes it difficult not to become a convert.

Riding the endless wave of Welsh solo talent that includes Gruff Rhys, H. Hawkline and Euros Childs, Jones is in Oxford touring his acclaimed new album 2013. Instead of psychedelia however, Jones offers up a bold brand of chamber-pop. Occasionally accompanied by a 30-piece orchestra, the more compact dimensions of The Bullingdon mean that tonight he’s joined by a taut four-piece, whose multi-instrumentalism more than makes up for their lack of numbers. With florid lyrics referencing Byron, and instrumentation relying heavily on the harpsichord, you’d expect the music to be aloof and difficult to engage with. However, eclectic song writing, whimsical humour and onstage warmth make Jones both charming and accessible.

The set’s opener, the frenetic ‘How to recognise a work of art’, is probably the least classically influenced song from 2013; a driving brass-pop tune with a biting refrain: ‘It’s a fake, It’s a fake.’ There’s a deliberate irony to this criticism of ‘fakeness’, as throughout 2013, Jones live-samples other songs. ‘Strange Emotional’, one of the night’s highlights, for example, draws on David Bowie’s ‘Rebel Rebel’. Though as the gig progresses it’s clear that Jones’ attitude to his musical influences is respectful rather than derivative.

If ever the arrangements become too alien, as in the thrashing harpsichord ending of ‘Don Juan’ or the melodramatic ‘Olivia’, Jones’ charisma swiftly grounds the set, letting the crowd into his vision. In ‘Featured Artist’, he winks as he lilts the wonderful lyric ‘I am this week’s featured artist/ I’m the face of the Observer’s free magazine’.  On stage he’s almost comically tall and slight, but always effortlessly charismatic; after one track he apologises and sings the backing vocals he’d ideally have added. The centrepiece of the set is the meditative ‘Love’. Jones draws us in with a brilliantly mundane opening ‘Just another day / well it is, but…’, before eventually guiding the crowd upwards through his musings on God – his’ tenor resonating beautifully over organ accompaniment.

During the summer, I saw Meilyr Jones perform End of the Road Festival, but a smaller setting like The Bullingdon seems to suit his wandering and poetic subject matter more than a festival stage. His (second) encore ‘Be Soft’ is played acoustically, with Jones and his two violinists joining the crowd to immerse us in dream-like harmonies.