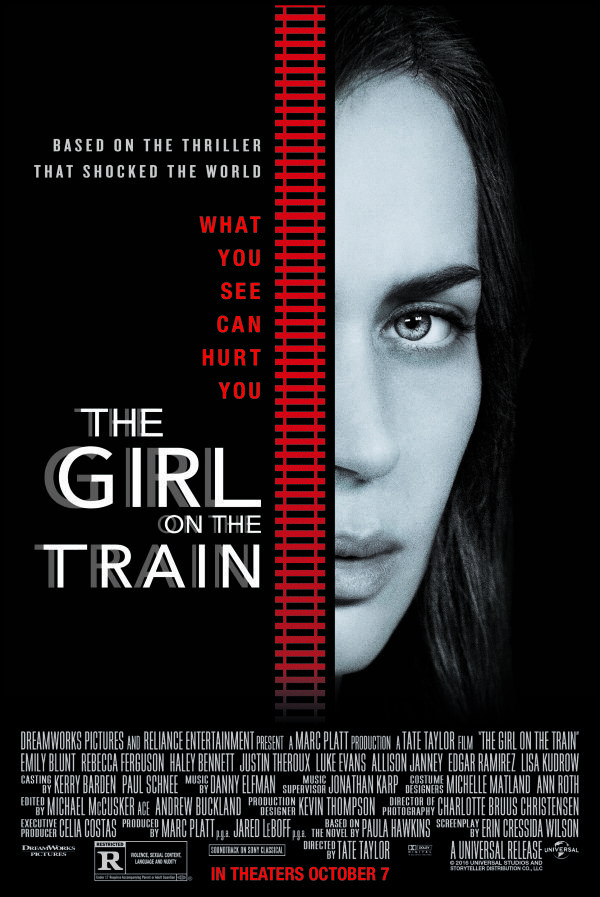 The Girl on the Train is a thriller centred on three women: Rachel (Emily Blunt), Megan (Haley Bennett) and Anna (Rebecca Ferguson), as well as the men and children who orbit around them. The entanglement of these various players is not overly complex but the casting of actors who are physically similar to each other (in size, stature and hair colour) keeps the narrative in a tight fold, visually relating each woman as a different facet of the same feminine symbol.

The train window is itself transformed into a kind of cinema screen where we as spectators, along with Rachel, can watch the unfolding of events via its illuminated parameter.

The film reveals the characters’ lives and their subsequent entwining through flashbacks and present day action anchored to the main protagonist Rachel.  An alcoholic who travels into Manhattan from the New York suburbs every day to drink in bars, Rachel gazes from a train window which functions as a portal into the lives of others.

The clichés of heteronormative family life which Rachel witnesses are displayed in a highly cinematic manner. The close ups, medium shots and stable focus with which we see both Anna and Megan’s domestic interactions are only possible when we delink from the on-screen object of the moving window. By this I mean to suggest that the film is in no way concerned with realism, despite its narrative interest with voyeurism. The window is itself transformed into a kind of cinema screen where we as spectators, along with Rachel, can watch the unfolding of events via its illuminated parameter.  This allegory is extended when we are shown the train’s exterior whizzing past on the tracks: the windows of the carriages, squared and evenly placed, echo frames on a reel of film, sprocketed and running towards a projector to create motion.

Some have suggested that Rachel’s struggle with sobriety is the film’s most poignant narrative motive. However, I would argue that it’s her inability to bear a child that takes centre stage in the drama, acting as her catalyst for addiction. One of the side effects of Rachel’s drinking is her tendency to black-out, creating a mental void which reflects the perceived ‘lack’ of a body which cannot reproduce. As well as this, the black-out episodes function to create narrative retardation. This contrast of the female body as lacking when without child and fulfilled when with child is woven through all three female leads. We are reminded of Rachel’s situation frequently, with multiple scenes displaying her as distraught. In contrast, Anna has a baby (with Rachel’s ex-husband) while Megan is pregnant but has previously had a baby who drowned. This articulation of the family serves to describe three dimensions of a feminine, bodily symbol: Anna (successful with child), Megan (failed with dead child) and Rachel (incompetent and unable to have child). I would argue that by positing the female body’s value as intrinsically linked to the ability to reproduce, the film’s subtext is relegated as unhelpful in rethinking women and the family as a stable unit.  In this way, Girl on the Train harks to a different metaphorical register than David Fincher’s Gone Girl (2014) which it has been consistently compared to.