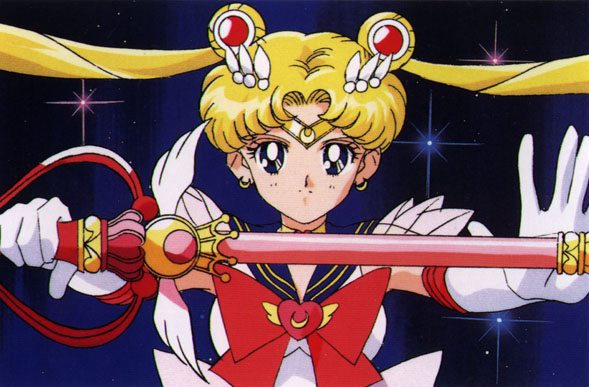 I’m back again! Join me in 6th week for a final overview, thinking about representation in kids’ versus adults’ media and the future.

There were a lot of things I thought about writing on this week: Captain Jack’s bisexuality in Doctor Who, the incredible Steven Universe’s non-binary femme-presenting couple among other things, Nickelodeon’s new Loud House which recently featured one character’s two interracial, married dads. Even Disney Channel, of all things, made the surprising decision in 2014 to debut their first openly queer couple, explicitly highlighting a toddler’s two mums in Good Luck Charlie. Google it if you don’t believe me!

But I wanted to look at something a little more retro this week, so what better than the original Sailor Moon anime (1992-1997)? This cosmic adventure series is full of queer characters – although you wouldn’t know it from the American dub!

In the Japanese version of the show, sailors Uranus and Neptune are just plain dating. They stare lovingly into each other’s eyes and are pretty open about it, while Sailor Uranus’s masculine appearance when she’s not in uniform makes a lot of the other sailors question their own sexuality. This still happens in the American version, but only visually. Because you see, Uranus and Neptune are just ‘cousins,’ guys. Very, very affectionate cousins. ‘Such cousin-y cousins!’ every voice actor is desperately made to shout, each attempt as hilariously unconvincing as the last. By the time Sailor Moon introduced new characters the Sailor Starlights, who transformed between female-bodied sailors and male-bodied boy band at will, America didn’t even try to dub their way out of that one, never airing these episodes.

This shows a pretty huge cultural difference. Although in anime there is a tendency to fetishize queer couples for straight audiences (but that’s a whole other topic for another time), this doesn’t seem to be the case here. Ultimately, Sailor Moon is a cute show that’s a whole lot more inclusive in Japanese with subtitles. While it’s not aimed at both adults and kids in the way my previously reviewed shows have been, if you’re familiar with it at all try checking out how the original narrative compares.