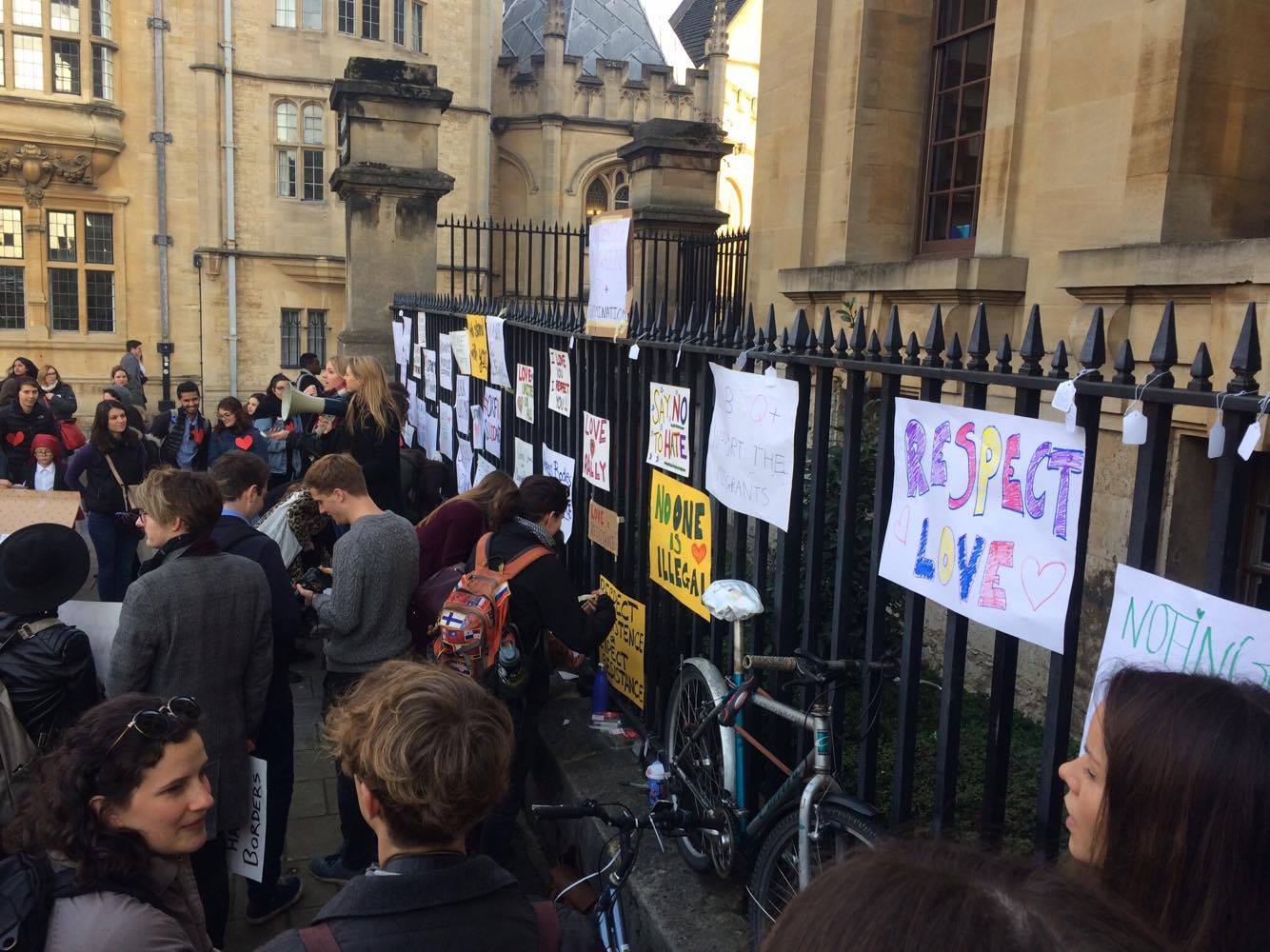 Hundreds attend ‘Love Rally’ in response to US election

Hundreds of people attended a rally in Oxford on Sunday for the event aiming to “show solidarity, love and support for groups facing marginalisation”.

The ‘Love Rally’, which took place outside the Clarendon building on Broad Street, attracted students, locals and families. The event began at 2pm and finished at 3.30pm.

The event included speakers from the ‘Oxford City of Sanctuary’ campaign, with many people shared their personal reflections on the result of the US election, and what this means for the world. Speeches, both planned and spontaneous, covered many issues.

A woman from France expressed her support for transgender rights, whilst one student told the crowd that if you are angry you must “be patient with yourself; that anger comes from love. You love yourself and those around you, and you wish to protect them”. He went on to say that, “our love is resistance, our solidarity is resistance, and our peace is active”.

Many of those attending the rally had paper hearts pinned to their clothes, following a trend started after the UK’s vote to leave the EU. The symbol was designed to show solidarity for victims of racist, religious or homophobic abuse.

Posters were attached to railings, and held by members of the crowd, including messages such as ‘”No-one is illegal”, “We are in this together”, and “say no to hate”. Following the speeches, chants were led with the crowd replying “We stand with you” to various minority groups.

The rally was organised by four university students; Alyssa Hubbard, Elizabeth Shaughnessy, Maya Cecilia Priestley and Caitlin Smith. “I’m incredibly emotional at the support seen today”, commented Smiht following the event, “I think this was something we all needed”.

The rally comes after Donald Trump’s victory in the US presidential election last Tuesday. In a shock victory, Trump won several key swing states, including Florida, Ohio and Pennsylvania, surpassing the 270 electoral votes needed. The Republican Party also now dominates the Senate and the House, with 51 senate seats in comparisons to the Democrat’s 48, and 239 in the House against 193.

This unexpected victory caused a furore amongst global media outlets, and sparked protests throughout America, with cities such as New York, Chicago, San Francisco, Philadelphia and Seattle seeing demonstrations. During his campaign, the President-elect issued several controversial campaign promises which divided the nation, such as CCTV in mosques, and the notorious pledge to build a wall across the border with Mexico to decrease illegal immigration.

“We are really excited about the event,” commented Alyssa Hubbard, one of the four student organisers, before the rally. “Personally, as an American from New York City, I have felt very far away from my country and the events unfolding.

“We felt it was critical to support people not only in America but in the UK and all over the world. We wanted to show that we are united in this together.”

Another protest in response to the US election is scheduled for tomorrow at 5pm near Carfax Tower.