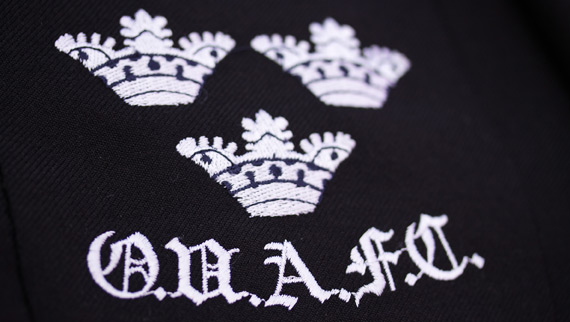 Do you know who won the 1874 FA Cup? No, not one of the current giants of English football – a rather humbler side, Oxford University. OUAFC have historical pedigree, meaning that there are big boots to fill for Laurence Wroe, the team’s current captain. A third-year physicist at Pembroke, he was elected last summer by Blues players. He plays in the classic captain’s position at centre-back, and though injury troubles have held him back recently, he is confident for the season ahead – especially with the Blues sitting pretty, level on points at the top of their division with almost half of the season gone.

The Blues play in the Midlands Division 1A, around the middle of the Universities league pyramid, but with small leagues (just six teams) the possibility of promotion is always on the horizon. “Our aim would be to win the league this season for sure… there’s no team significantly better than the others.” While the Blues struggled last season, only avoiding relegation with a 5-1 victory over Loughborough Seconds on the final day of the season, things have been better this season, with three wins out of four so far against Cambridge, Warwick and Birmingham Seconds. Although the path to promotion is rocky, with a play-off against the winners of other regional divisions to follow for the winner of the division, this could be a successful year for OUAFC.

In particular, Wroe seems confident about the depth of the squad, pointing for instance to Joan Crespo, a visiting student from near Barcelona who had a goal-scoring cameo against Cambridge. “We haven’t seen that much of him, but he has an exciting season ahead.” He also praises Dom Thelen, a Queen’s player who he tips to break the college goal-scoring record, as well as possibly even the OUAFC top goalscorer record – at least based on the records on the OUAFC website. He highlights continuity as crucial. “We have a young squad, so next year there should be quite a few sticking around” – boding well for the future.

The Road to Varsity

As much as their league form, Wroe is excited for this season’s Varsity match against Cambridge as well as the fast approaching Brookes Varsity match. The fiery nature of the league game against Cambridge this term – with three penalties and half a dozen yellow cards – suggests that the great rivalry is very much being kept alive on the pitch at least, and should make for an interesting spectacle for the Varsity game around the end of Hillary. The Brookes Varsity meanwhile will be taking place on Friday 25th November at the Iffley Road sports ground, and Wroe anticipates a tight match: despite Brookes’ lowly place in the league pyramid, he reckons that “standards-wise they are probably in our division”, especially considering that last year’s match resulted in a Brookes victory (on penalties). An increased focus on integrating with the women’s team means that the two games will kick off one after the other, the women’s at 17:00 and the men’s at 19:30, with food vendors around and a potential club night to follow.

Captaincy – what does it involve?

Wroe helps run regular training sessions with the players, along with professional coach Mickey Lewis, an ex-pro and former assistant manager of Oxford United. He speaks highly of Lewis: “He is really useful in that I can let him run the training and then I can just be a presence, giving individual advice to the players for instance.” While Wroe was only elected in the last year, Lewis has worked for the Blues for over ten years, offering stability to the club, as well as considerable experience of football at a higher level.

If Lewis is important for drilling the team, Wroe’s emphasis is on motivation. He worries that a lack of ambition cost them last year, with an influx of players into the eighteen-man squad following an injury crisis leading players to simply aim to stay in the side. He feels many “were concerned about keeping their place in their team rather than winning the game.” Wroe aims to change this mentality: “this year I’m trying to man-manage it so that everyone knows their position in the team and the only thing that matters is us winning.” Increased ambition combined with better communication with the players “so they’re not concerned about how they individually play as long as we win” could have a galvanising effect on the team, and already seems to be working in terms of results on the pitch so far.

Wroe, however, is unable to lead by example in the way that he would like. In the last match before last year’s Varsity match at Craven Cottage, he tore the anterior cruciate ligament in his knee, leading to a long injury lay-off. Summer surgery means that he is hoping for a return to the pitch in Hillary, but the injury has clearly left him frustrated. “When we went two-nil down against [Nottingham] Trent, all I wanted to do was just to get on the pitch! Being so involved, it does make the result affect you a lot more.” While he missed last year’s Varsity win over Cambridge, he still joined the team on their tour to California, in which they played Berkeley, Santa Barbara and other college teams as well as having tours of the headquarters of companies like Google and Facebook.

Wroe has a good footballing background, playing from a young age and captaining his school, although his method of supporting professional teams is rather more unorthodox. “I don’t actually support anyone. I used to support whoever Andy Cole played for, but then he kept on changing teams – Man Utd, Blackburn, Fulham, Man City. But then City became too good, so I don’t really support anyone right now.” He hopes to get into semi-professional football after finishing his degree, and bemoans the paucity of former Blues in non-league football, suggesting that it often fits poorly with high-pressure jobs. Wroe’s own experience with OUAFC trials – he failed to get past his first trial, before gaining a place in the Thirds squad later on in the year – demonstrates that Blues football is open to everyone, and he encourages both fresh and not-so-fresh to try out for the Blues whenever possible, as well as playing college JCR football. After all, any new arrivals could find themselves participating in what should be a very successful season for the Blues – and their captain.