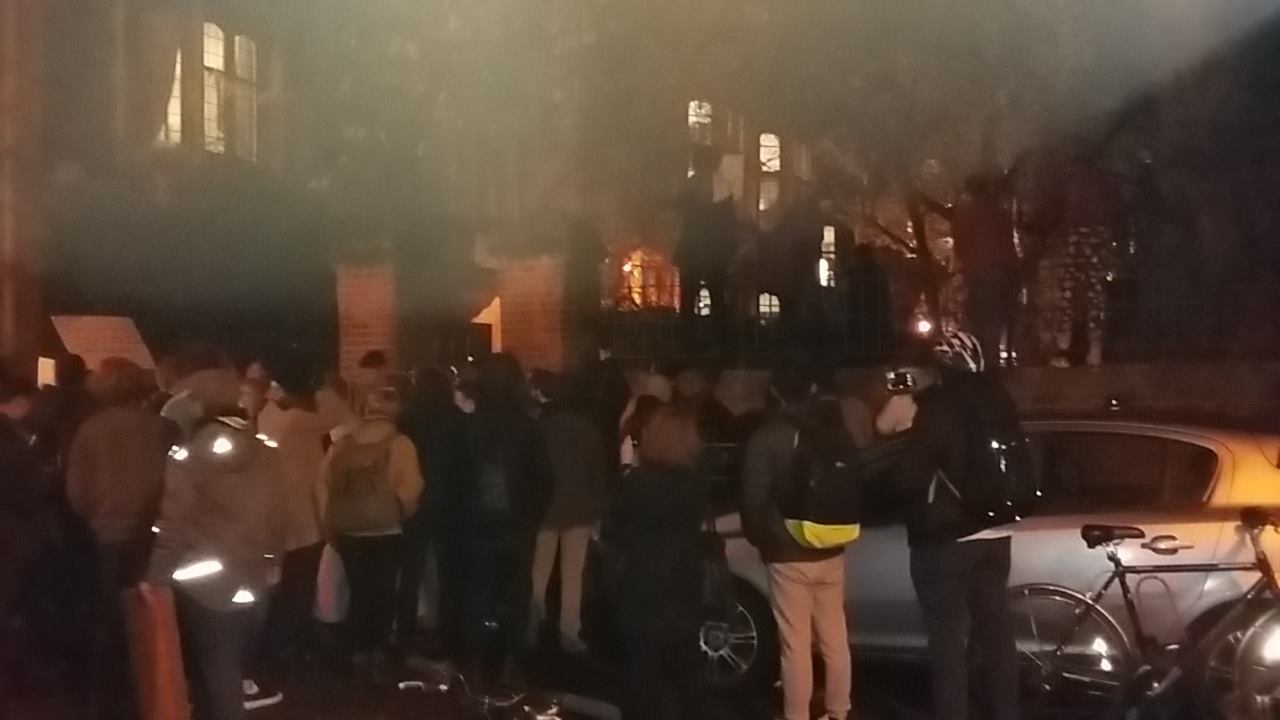 Protesters have gathered outside the Oxford Union as US President-elect Donald Trump’s ex-campaign manager Corey Lewandowski delivered an address to the society.

The protest was organised by OUSU LGBTQ Campaign and Oxford Migrant Solidarity.

The protestors involved began to assemble at around 7pm and stayed for the duration of Lewandowski’s speech. The chants of the protestors were said to be faintly audible from inside the building.

Protestors chanted “fascists are not welcome here”, “fuck Donald Trump”, “fuck the Union”, and “no Trump, no KKK, no racist, fascist USA”.

Lewandowski, 43, was campaign manager for Trump from January 2015 to June 2016 after previously working as a lobbyist. Although Trump once claimed he had “tremendous energy” and a “wonderful vision for politics”, Lewandowski also had a difficult relationship with the press. During the campaign, he was charged with battery after allegedly grabbing a female Breitbart News reporter. The charges were eventually dropped but footage surfaced of him grabbing a protester at another event.

He clashed with several senior members of Trump’s campaign staff and some workers have complained about his temperament. Several senior figures in the campaign celebrated when he left, although the exact circumstances of his departure remain unclear. Some reported he was fired, while Donald Trump Jr claimed it was an amicable decision. He has since taken up a post at CNN where he has been criticised for supporting conspiracy theories suggesting Barack Obama was not born in the United States. He has also denied claims that he tweeted antisemitic material about Hillary Clinton’s campaign.

In a statement, the OUSU LGBTQ campaign said, “The LGBTQ Campaign stands in solidarity with all LGBTQ people, people of colour, Muslims, migrants and refugees, disabled people, women and anyone who fears hardship or violence under a Trump presidency. We strongly condemn the normalization of bigotry and the legitimisation of those complicit in fascism and white supremacy, including Corey Lewandowski. There can be no neutrality in the face of fascism; by hosting Lewandowski, the Oxford Union is complicit in this legitimisation.”

Several witnesses from the crowd reported altercations between protestors and security staff, and that several protesters had attempted to climb the fence beside the Union’s main entrance

One protestor told The Oxford Student that they were “making clear to the Oxford Union that we’re not happy that a fascist has been invited here so we can just have a rational discussion with a racist, and a white supremacist.”

Another said that “giving someone a platform is an act that entails a huge amount of responsibility…If you’re going to give a platform to someone who is inciting violence and racism, you need to be cautious and expect a backlash.”

“We’re here to protest the fact that a neo-fascist is being given a platform by the Oxford Union.”

In February 2015, an address by French far right politician Marine le Pen was delayed after protestors gathered outside the Union.

And in June 2015, the society’s standing committee passed a motion that declared itself “institutionally racist” in the wake of a scandal involving a special cocktail named “the Colonial Comeback” at a debate on colonial reparations.

The President of the Oxford Union, Noah Lachs, declined to comment on the protestors.