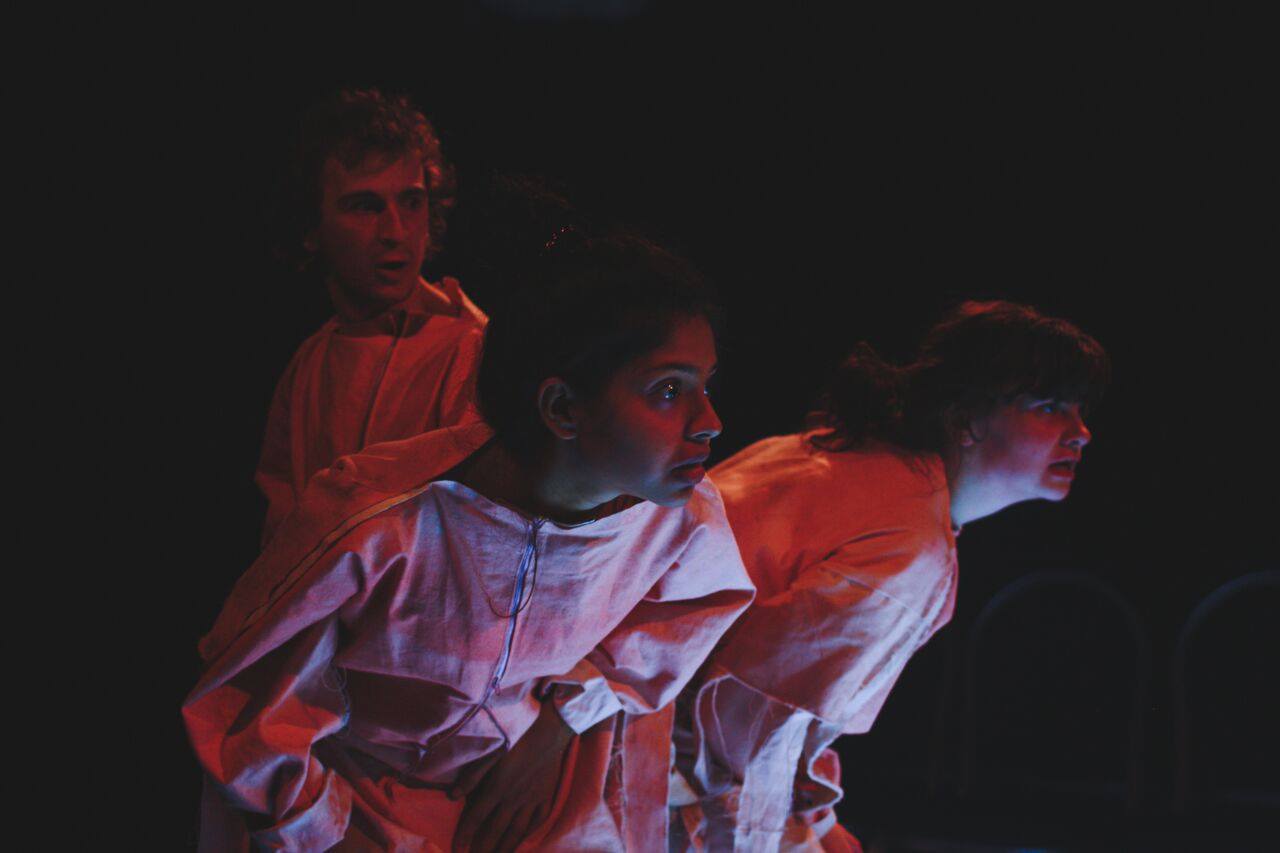 The Skriker, a play about a baby-snatching ancient fairy, was always set to be bizarre. Yet, Blank Canvas Production’s performance of this play was absolutely magnificent in its wild peculiarities. It is difficult to make such a play so rooted in surreality feel natural and effortless in its performance, which is exactly what The Skriker needs in order to be so forceful. Fortunately, this production excelled in making this play not quite have the disorientating, hallucinatory quality of a dream, but the feeling of the genuinely tangible and immersive reality of a nightmare.

From trailers released it would be easy to assume that this production could be too outlandish for its own good. It was difficult to establish any sense of a real narrative in the trailer, and it sounded as if there was perhaps even autotune on these creeping voices. However, in actuality, this production offered eccentricity at its finest. What could have been perceived as autotune was actually due to the infinite excellence of the three actors who made up the Skriker themselves. Kate Weir, Will Spence and Anushka Chakravarti were the highlight of the show: their cohesiveness in acting as one character was sensational. The modulation of their voices and impeccable timing in order to produce the creepiness of this one character was impressive. This cannot have been an easy task to accomplish as the Skriker’s speech is often based on variably intelligible gibberish, but they were so utterly united that it produced the chilling effect that was so desirable. The Skriker as a character was also fragmentary, permitting the individual actors to exhibit their abilities. This was not just a play to inspire horror, but also had moments of immense comedy- either because it was genuinely funny, or because the audience needed the cathartic release. Kate Weir in particular offered ominous comedic relief from her ability to comfortably delve into an American accent, to be terrifying one moment, and strangely amusing the next highlights her overt talent. Anushka Chakravarti too diverted from menacing eye-popping contorted expressions, to being able to act convincingly as a child. Combined, these three actors donned in pale pink rags, tights and painted pink feet made the most perfect Skriker.

Its meticulous assembly allowed for an exceptionally creepy delight

Alethea Redfern and Imogen Allen as the two counter-characters to the Skriker, the former pregnant and the latter previously locked in a mental hospital, offered fluent and hypnotic performances. But, this production did not just rely on the proficiency of its actors. Every element of this production was carefully constructed. The lighting, designed by Louise Drognat-Landré was particularly excellent. Lights were even on the floor to create a circle allowing for the intimate Michael Pilch studio to become a vortex for the macabre oddity of the Skriker. The set design also, by Virginia Russolo and Will Rees, added greatly to the success of this performance. The use of stretching screens meant that the actors, by pressing their faces against these screens, could offer such terribly contorted faces as if they were trapped in the transparent membrane of an amniotic sac. This was particularly poignant in a play about pregnancy and a baby-snatching fairy.

Overall, this production of The Skriker surpassed expectations, and this in large part must have been due to the strong directorial vision of Mary Higgins. Its meticulous assembly allowed for an exceptionally creepy delight, and offers exciting prospects for future Blank Canvas productions.