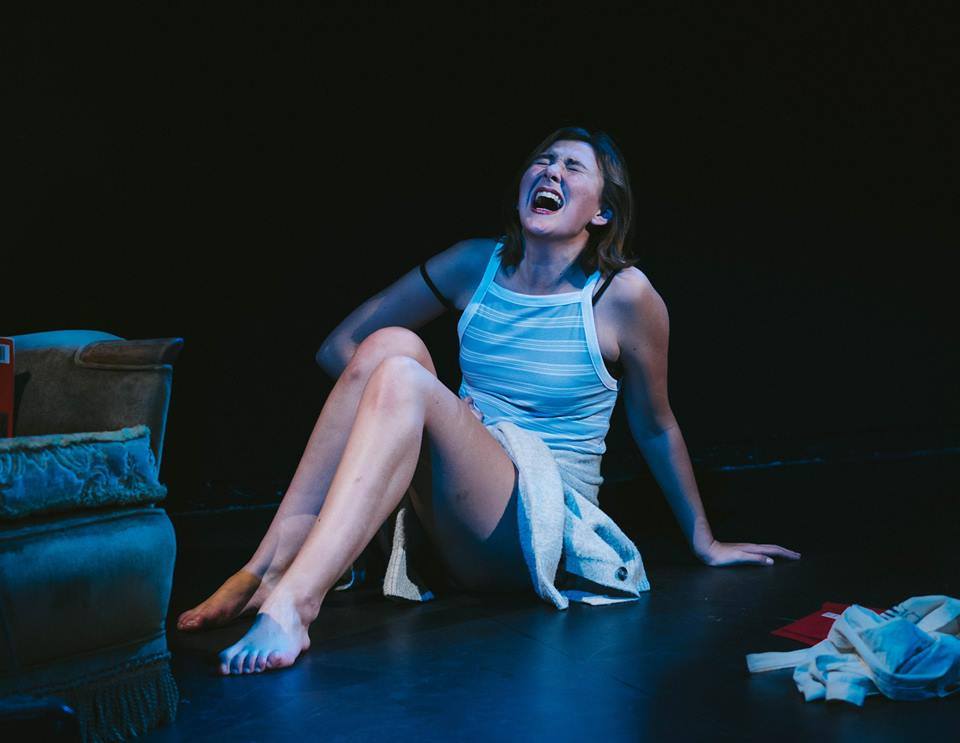 The gentle sound of bird wings flapping, gradually increasing in pace towards a frenzied panic that suddenly stops. The death of a pigeon is our introduction to It Felt Empty, in which the unsettling and comic take turns to tug at the audience’s emotions. This opening scene sets the timbre of the play as one that is dedicated to portraying the humanity of victims of sexual trafficking. Focusing on the story of Dijana, a young Croatian woman tricked into a life of prostitution, the audience are presented with the human face of a narrative that is so often glossed over in news reports.

The play elicits a slightly self-conscious laughter in its audience, and this hints at an uneasiness that comes with approaching such serious material – especially within the medium of amateur, student drama. It would have been unjustified for Oxford students, with our access to elite privileges, to produce this show without the careful research and sensitivity which the director Lauren Jackson has clearly put into this production. The cast and crew have worked with the charity Clean Break, who support women at risk and those going through the criminal justice system; and in another sense are working for them, because all proceeds from the show are donated to the charity.  This makes It Felt Empty an example of theatre that is not only wonderfully crafted by its actors and producers (as so much of Oxford drama already is) but a praiseworthy movement of social activism.

In the lead role, Natalie Lauren, plays Dijana with a wistful hopefulness that undercuts the horrifying context of a world that is dark, exploitative and abusive. Lauren commands the stage with a dignified poise in what is predominantly a one woman show. This is a remarkable feat for even the most tested of actors. The portrayal of Dijana as a naïve, child-like girl with a lilting sing-song voice jars with the presentation of her as a woman with intelligence, flair and a dirty sense of humour. However, this forms part of the psychological exploration of her character and play’s ethos to present her as a person – not another statistic. The commodification of women is a theme that the script playfully inverts with Dijana’s refrain that she has a “head for numbers”, her potential as a worker in the City parodied by her counting out twenty one used condoms, the new currency of her life.

It Felt Empty was a moving piece of drama, that was truly innovative in its ability to render such material beautiful.

The script is taut with the perfect balance between such hard hitting material and refreshing comedy, such as the exclamation “you look like a fucking Heinz baked bean” or the mocking of L’Oreal’s patronising “you’re worth it”. The introduction of Gloria, played expertly by Shannon Haye, is richly comedic and opens up a new dynamic in which we see Dijana’s interaction with other women. It would have been interesting to develop this dialogue further as Haye’s only appears in a few scenes to provide a glimpse into the context beyond Dijana’s narrative. Crucially, in this play the perpetrators of prostitution – the male traffickers and clients – are kept offstage. The female only space imbues Dijana with a power that she otherwise lacks, the ability to construct herself and her story in her own words is an important force within the production. The second half of the play oscillates confusingly between time frames and seemed to suffer from a lack of clear direction. Despite this Lauren maintains the emotional tenor of the performance with her mesmerising acting.

In the confined space of the Michael Pilch Studio, amidst the overwhelming heat and surrounded by darkness it feels as if the stage is the crack in society into which women like Dijana fall. The staging of the play is carefully considered, as the setting of a flat is recognisably transformed into London, Brighton, a plane. The performance was meant to be promenade, with the audience encouraged to wander at leisure, but the powerful intimacy of the play made such movement feel like it would be an intrusion.  The artwork suspended from the ceiling provides an interesting counter point to the central character’s monologue, as it imbues the space with traces of real voices belonging to real victims of trafficking. In this environment the audience are positioned as witnesses and made implicit. Although nothing in the play is resolved, the director has managed to create a distilled sense of responsibility in the audience. It Felt Empty was a moving piece of drama, that was truly innovative in its ability to render such material beautiful.

Margin Call: Well worth investing your time in