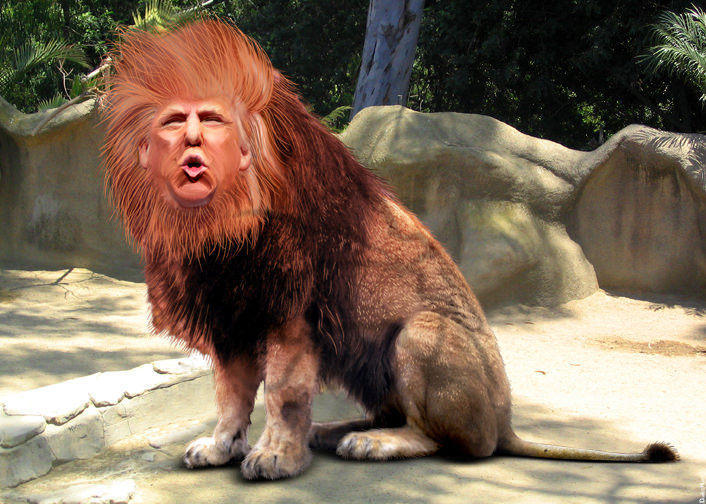 Mirror, Mirror, on the Mall
By Chris Allnutt

Last week, Black Mirror’s creators took to Twitter to deny rumours that the American election was merely an extension of the show. “This isn’t an episode,” they tweeted, “This isn’t marketing. This is reality.” Co-creator Charlie Brooker initially worried that 2013 episode “The Waldo Moment,” which shows a cartoon bear’s rise to political prominence, hadn’t quite hit the mark. Now the plot seems almost idealistic.

Back in 2000, The Simpsons offered an irreverent warning for the political future. In a vision granted to him by a Native American casino manager, Bart sees his sister Lisa become President, and she warns her team of the state of things with disturbing prescience: “As you know, we’ve inherited quite a budget crunch from President Trump.”

Worryingly, this is not the only example of film and television elevating Trump to the Oval Office ahead of time. From Bart to the Future to Back to the Future Part II: last year writer Bob Gale confirmed to the The Daily Beast that the film’s antagonist, casino mogul Biff Tannen, whose reach into the Republican Party eventually brings him his own political power, was indeed based on Trump.

The bezel between the screen and reality appears to be narrowing. John O’Farrell, writer of Spitting Image, described in a Guardian interview last month how satire now seems to pale in comparison to the reality of modern politicians. “Satire has sort of died, really. There’s no pedestal to pull them off. The public hold them in such contempt.”

There’s still hope though – South Park’s writers were caught off guard enough by the result that their post-election episode “The Very First Gentleman” had to be rewritten (and renamed “Oh Jeez”) after initially predicting a Clinton victory. With the gang’s school teacher Mr. Garrison now the spray-tanned winner of the Presidential election, the show offers little optimism about the incoming regime. “The people have spoken,” he declares in his acceptance speech, “Just like JJ Abrams did with Star Wars, I will make America great again.” That it had to be rewritten is evident; the dialogue feels rushed and the episode lacks any real sense of continuity or trajectory. In light of recent events, however, it might not be unjustified to consider it a satirical success.

When the world ended last week, some friends and I watched The Lion King. Childhood regression was our coping mechanism. Yet, overcome with disillusionment as we sat in the dark and drank hot chocolate, we realised something: Simba is Donald Trump.

Yes, The Lion King predates Trump’s nativist shenanigans by over 20 years, but just go with it.

Let’s make this clear: The Lion King is a drama of white supremacism. The monopolisation of wealth at Pride Rock leaves the hyenas to live in abject poverty beyond “everything the light touches”. Hyenas, who speak throughout in African American Vernacular English (AAVE). Violent, mentally impaired, easily swayed by the promises of the corrupt, liberal establishment, The Lion King demonises the coalition of the ascendant, placing the viewer’s sympathy in the populist, political newcomer who unites the (obviously, totes) oppressed white race.

The Lion King needs you to buy into one thing: that, despite his incredibly privileged upbringing, brought up in literal royalty, Simba is the underdog.

And who is Simba’s main opponent? Scar. Demonised and, as it just so happens, effeminate, brown-skinned and visually marked by violence. While all the other lions look and act the same, Scar is different and acts maliciously, so the others unite against him.

Thus, the only gay brown lion in the film is bad and every straight, golden-haired one is good.

Scar promises “the dawning of a new era in which lion and hyena come together,” resulting in the horrible oppression of the previously hegemonic lions, a massive drought, and everything generally going to hell. Obviously. The utopian idea that racism and the poverty attached to it aren’t natural or unsolvable is soundly defeated when the food runs out. And Scar leading the Hyena horde into the midst of the poor, downtrodden lions seems like a good proxy for the race-war fantasies of such noted Trump aficionados as Dr. David Duke PhD (thesis title: “Zionism as a Form of Ethnic Supremacism”).

By the time Simba has grown, everyone is desperate for a restoration of the old order. Now that Scar’s promises have proven crooked, even his pack-like (inner-city violence, amirite?) followers are muttering that things were better under Mufasa’s benign despotism. Thanks, Mufasa. And who should come to the rescue but an outcast promising change which sounds suspiciously like the 1950s? Who has used his small loan of a million dollars to bootstrap himself and recruit some new henchmen? Who has got himself an aggressive, New Jerseyan warthog who saw which way the tide was turning, and an assertive talker of a meercat, who claims to be different from his porcine friend but is every bit as keen to acquire power via the POTUS (Potential Ombudsman To Umpire Savannahs)? At the head of it all, showing the Art of the Deal, is Simba J. Trump.

Althusser told us “You and I are always already subjects, and as such constantly practice the rituals of ideological recognition”. Maybe five-year-old us should have been reading some Marxist philosophy instead before bedtime.