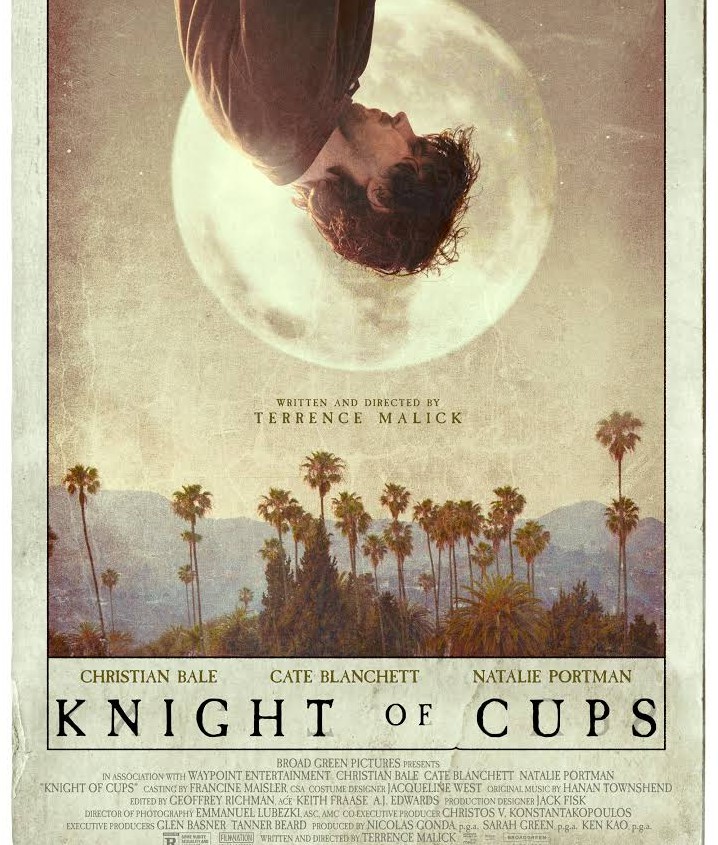 2016, amongst all the social upset, has produced some great films! Many of these have been politically charged, shedding some light onto current turmoil by providing critical inquiry into culture and even proposing alternatives. Granted, I have not seen all the releases of 2016. In particular, I should note, I didn’t get to see Ciro Guerra’s Embrace of the Serpent which may have made it to the list. Some of the films I have selected were critically acclaimed, whilst others were met with poor reviews and audience walk outs. My selection, therefore, may be somewhat controversial (but that’s always exciting). So behold: My top films released in 2016!

1. Knight of Cups
This film in particular polarised opinions, but for me this is the best film I saw all year. Terrence Malik’s fragmented tale of disillusion and alienation is embodied by screenwriter Rick (Christian Bale) wondering around Hollywood, encountering different people and spaces. A nuanced critique of contemporary American culture as unstable and fragile under the veneer of capitalism.

2. American Honey
As Andrea Arnold’s first film set in the United States, she continues to tell the stories of the disenfranchised working poor in a poetic and oneiric style, established in her previous films Red Road (2006) and Fish Tank (2009).

3. Youth
Any year Paolo Sorrentino has a film released it will undoubtedly feature in my top ten. Youth is his second film in the English language and is a melancholic musing on time and age, with his signature fluid camera movements plus a great soundtrack including Mark Kozelek.

5. Evolution
Disturbing and uncanny, Evolution, directed by Lucile Hadihalilovic, submerges spectators in an affective unpacking of the body and seduction.

6. Midnight Special
A father and son on the run from the police and the church, Jeff Nicols continues to critique the United States by interrogating its politically infused, contemporary geographical landscape.

7. The Neon Demon
Style as substance (not over substance). Nicholas Winding Refn seduces and repulses us by stroking and poking the excreting surface of the fashion world.

8. Hell or High Water
Great ensemble casting: Ben Foster and Chris Pine play the brothers who rob the banks that have been “stealing from us our whole lives”, whilst Jeff Bridges and Gil Birmingham play the law enforcement that unpack the criminal character of the United States by reminding us of the erosion of Native American culture. Tight and witty dialogue from screenwriter Taylor Sheridan and notable soundtrack from Nick Cave and Warren Ellis.

9. Nocturnal Animals
Three-pronged narrative, rich with love, heartbreak, tension and vengeance, all elegantly drawn together by Tom Ford’s already distinct exquisite and beautiful mise-en-scene. Read my previous review of this on oxfordstudent.com for more of my thoughts.

10. Maggie’s Plan
This film seemed to go fairly unnoticed, which is a shame. Greta Gerwig stars as Maggie in this ultimate rom-com-for-academics directed by Rebecca Miller.