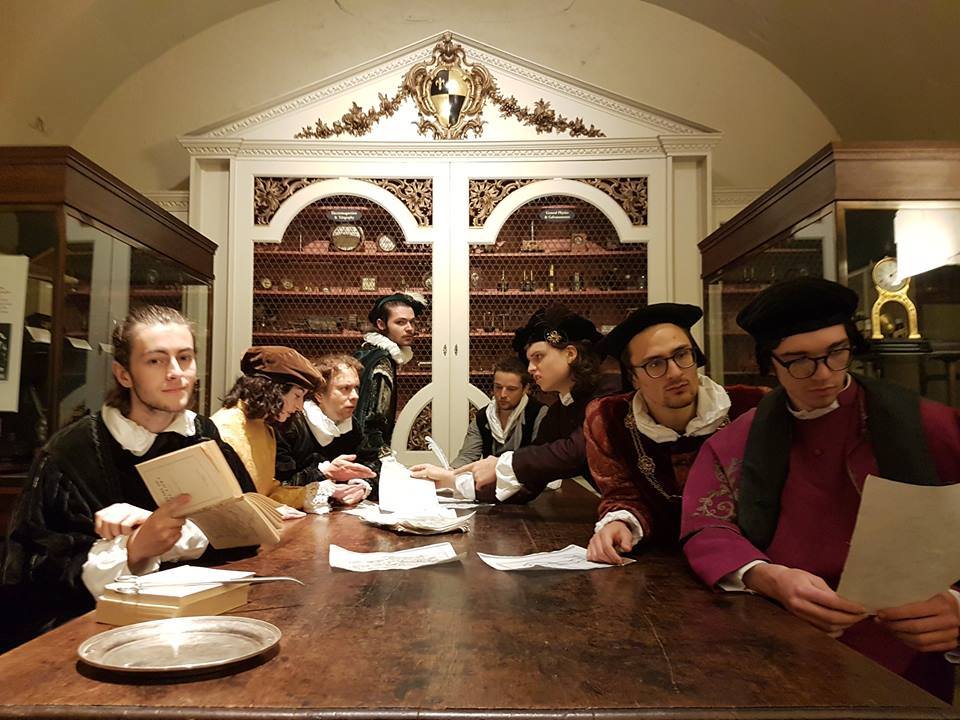 I have never seen a play like this one before. For a start, the premise is utterly fascinating: based on a true story of a 16th-century obscenity trial in Paris, Doctor Charles Estienne (Theodore Keeping) is called to defend his use of explicit diagrams at a time of religious paranoia and heavy censorship. This is a play that is lavish: extravagant costumes, live baroque recorder players, atmospheric candles all contained in the hushed depths of St Peter’s College chapel. Sitting in the audience waiting for the play to begin, as the dancing candles project a haunting shadow show in the caverns of the chapel and a covered body lies provocatively on centre stage, there is a different atmosphere altogether. The usual expectant buzz of conversation before a curtain rises is replaced with the reverent hush of a vigil.

There are many elements that makes this play unique to my pretty eccentric and occasionally embarrassing history of theatre-going: an original script that is not only good, but alive; it is an immensely characterful and wonderfully shaped work. There was also a host of actors who could have been teleported straight from 1545 and I wouldn’t have even raised an eyebrow. But amongst everything there is to commend about this production, there is one outstanding piece of genius: the thrust stage. There is a reason why The Globe, the darling of all thrust stages, has become a mecca to theatre-lovers the world over, and directors Rebekah King and Alexia Kirk and stage manager Mariana Castro know just how to satisfy every early modern theatrical nerd’s dream. The thing is, it doesn’t feel like a play. Or rather, more accurately and yet more disconcertingly, I don’t feel like I am part of an audience.The staging means that we are thrust directly into the action, with characters, especially the Informer (played by Joshua Cathcart, I have the word ‘brilliant’ scrawled in my notebook for every time he enters a scene) speaking directly to us. This is no breaking of the fourth wall. The audience is no passive viewer, we are a witness in every sense of the word; indeed we become the ninth member of the cast. During the trial scene, the actors speak to us as if we are the jury in the theatre of a court, but we also become, and are referred to as ‘the mob’ when the pornographer (Pietro Nickl) peddles his wares to us. Just as members of the cast double up and play different characters, so we as an audience change and perform with them. This staging was a piece of genius and it left me astounded.

The only phrase that could capture the feel of the script and the intellectual material that the cast work with is ‘cleverly deceptive’. King weaves a subplot concerning the activities of a group of protestant reformers, which, before it joins with the main plot in an explosive twist, sounds out the meaning behind the whole play. The central concept of ‘nakedness’ is explored in its religious dimension – the idea of the nakedness of the vernacular Bible and the concept of ideas made naked and exposed through print. A clever concept which is executed tastefully despite its potential for pretension. Yet the more manifest associations of nakedness in terms of the body are also given a fresh twist. The magistrate (Niccolo Pescetelli) himself is deformed, his body falling apart; he acts as the physical manifestation of the anatomical drawings that Estienne commissions and that he himself condemns. Indeed, the trial scene is King’s piece de resistance. Bishop du Bellay’s (Henry Deacy) insistent questioning of Jean de Baiff (played by Meg Harrington, a wonderfully comic actor) is teasing and provocative. Asking ‘and how do you feel when you look at those pictures’, the Bishop’s voice drips with a euphemistic delight, that manages to condense the whole theme of hypocrisy into a single line.

Indeed, the acting throughout is superb, especially Jean and Estienne’s relationship which has real charisma and charm. If there is anything to criticise, it is the characterisation of Estienne. Keeping is an actor born to play this role; his voice, mannerisms, appearance are all spot on. But the problem with Estienne is that even when the language and tone moves towards passion, especially in the crisis of the play when Robert Estienne’s (Jaroslav Fowkes) allegiances are revealed, Keeping does not plumb the emotional depths of the character in a way that we anticipate, and that would have been much enjoyed. Perhaps this is the mandate of the script; perhaps Estienne is intended to be the ‘unsocial, slightly wacky mad scientist figure’ but this is a worn out trope. I am perfectly convinced that King and Keeping both have the necessary talent to create more from such a rich character. Indeed, Keeping’s telling of the story of Job in his last scene is wonderfully emotive. The line ‘so, so much’ is perhaps my favourite line ever spoken by a student actor, saturated as it is with emotion and meaning. What a perfect place to end the play on, and what a deeply, deeply impressive and immersive piece of theatre ‘Naked is the Realm’ is.