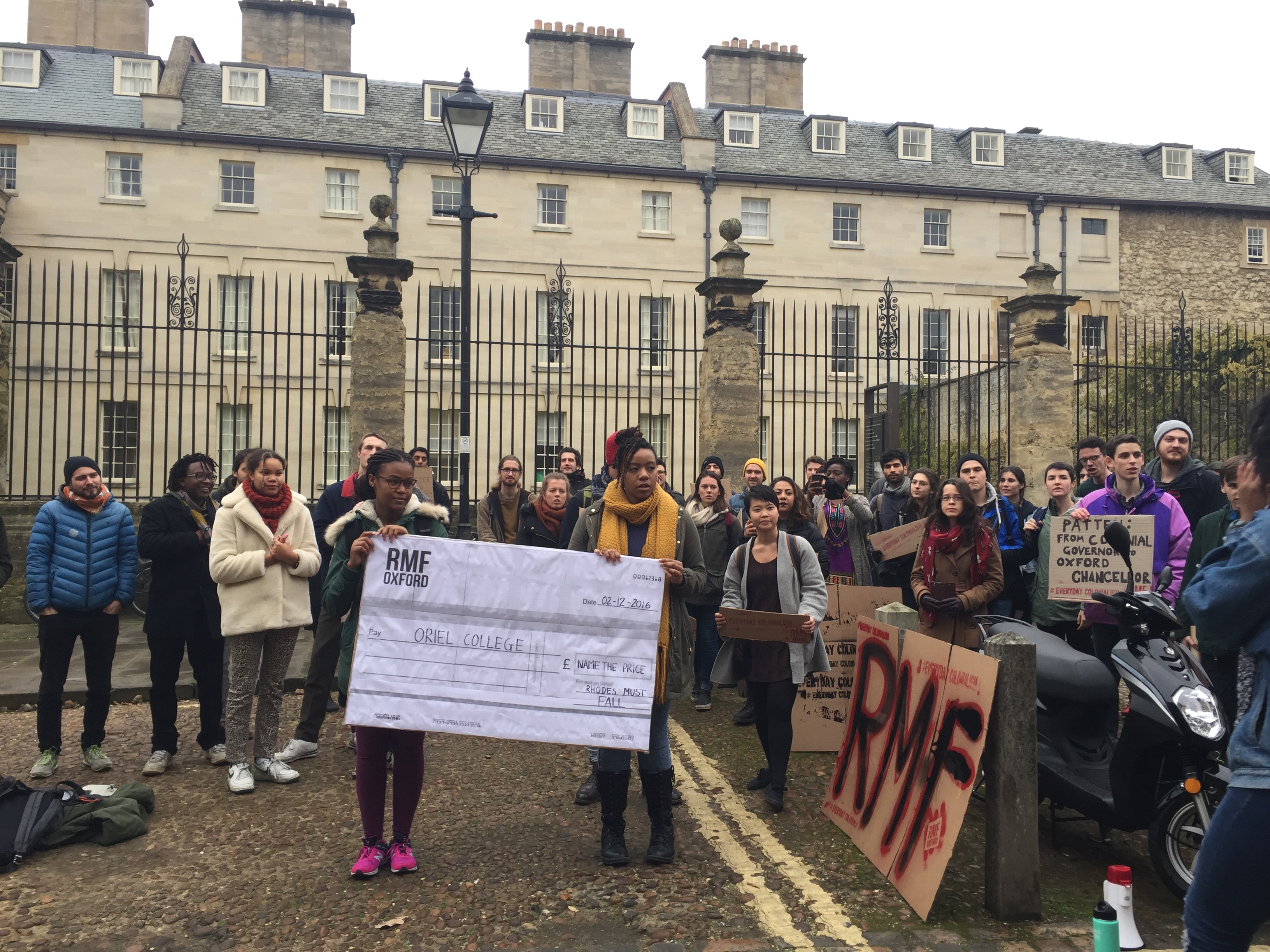 Rhodes Must Fall accuses university of “institutional neglect and indifference”

Supporters of the Rhodes Must Fall Oxford campaign gathered outside Oriel College at midday today to protest against institutionalised racism and the continued presence of the Cecil Rhodes statue. Around 40 protesters were present and called for increased representation of black students and black professors at the university, the “decolonisation” of the curriculum and an end to “racism faced every day at this institution.”

A series of chants organised by protesters included the lines “Oriel, Oriel, name your price” and “Get up, get down, there’s a decon movement in this town”. Organisers also presented a blank cheque to staff at Oriel to protest the decision to retain a statue of Cecil Rhodes within the college, something that Rhodes Must Fall ascribes to the potential loss of millions of pounds’ worth of donations.

In a statement issued this morning, campaign organisers expressed their disappointment at the University’s position regarding what they term “everyday colonialism”, an issue that they claim is still prevalent in the city: “Colonialism was always more than a military project. It was a project of ideas: of upholding the supremacy of colonisers. And that project remains alive and well, not least in Oxford.”

Accompanying the protest was a new social media campaign aimed at raising awareness of “ongoing sites of colonialism” in the city and beyond. In an attempt to raise awareness, cardboard signs bearing the hashtag #everydaycolonialism appeared around the town centre this morning, ahead of the protest at Oriel.

The campaign began back in March 2015 when efforts to remove a statue of controversial colonial figure Cecil Rhodes from the University of Cape Town received global attention. Shortly after, students in Oxford called for a statue of Rhodes in Oriel College to be removed, and formed Rhodes Must Fall Oxford with the added intention of increasing representation for minorities within the university.

The governing body of the college voted to retain the statue in January 2016, claiming it represented “an important reminder of the complexity of history and of the legacies of colonialism still felt today.” Documents shown to The Daily Telegraph, however, revealed that the decision may also have been financially motivated, with concerns surfacing regarding the decision’s impact on donations to the college.

Rhodes Must Fall Oxford also addressed senior figures in the University administration, including the Chancellor, Lord Chris Patten, and the Vice-Chancellor, Professor Louise Richardson. Earlier this year, Lord Patten suggested that students involved in the campaign ought to embrace freedom of thought or “think about being educated elsewhere”.

According to the organisers of the campaign, the blank cheque presented today is intended to call into question any financial justifications for the statue: “We are asking Oriel to name their price. If it is money, not morality, that they are responding to, what will it require for them to relocate the statue of Cecil Rhodes? How many Churchills on the new £5 note will it take to take down Rhodes?”