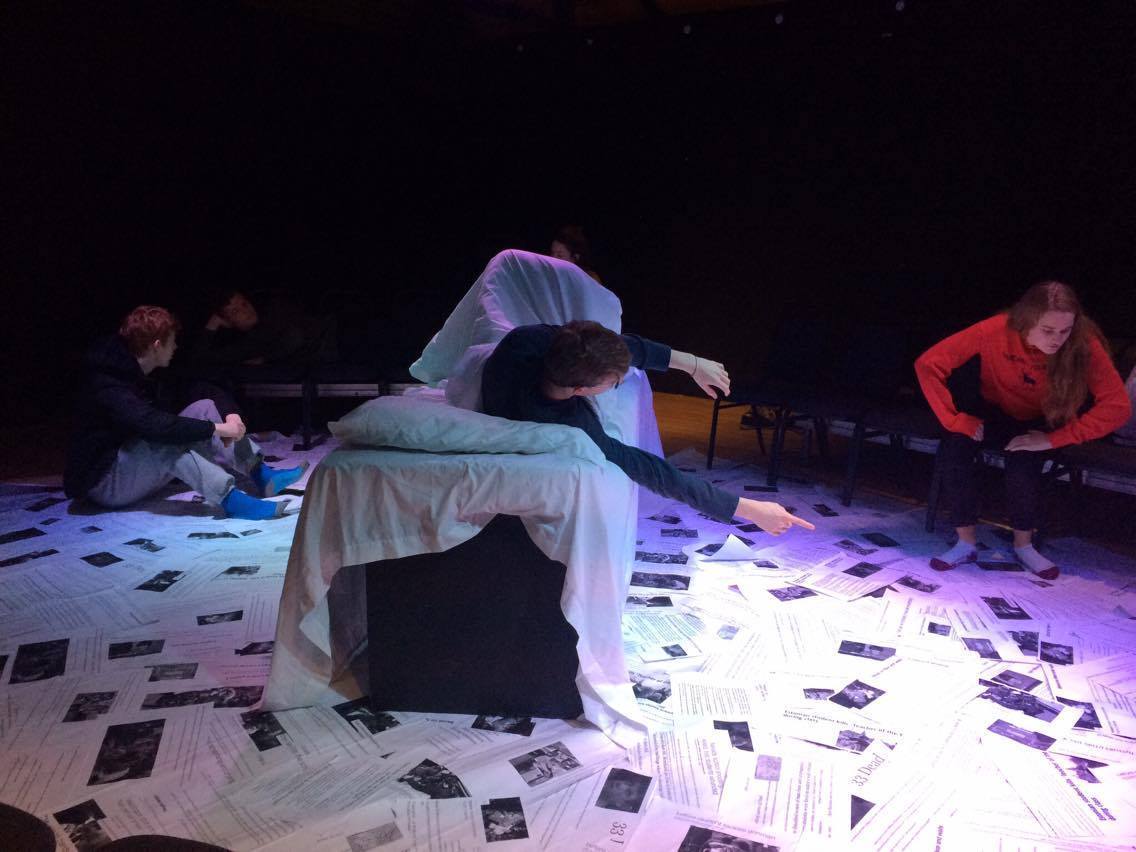 William Matrosimone wrote ‘Bang Bang You’re Dead’ to be performed ‘by kids, for kids, for free’. While the play poses serious questions about the disastrous consequences of school shootings, its intended audience renders it inadequate for an Oxford student production.

The play is comprised of a series of flashbacks in the mind of a school-shooting culprit, Josh. The staging, with audience surrounding the acting-space from all sides, cleverly reflects Josh’s disturbed mind; in which the world of external abuse fuses with that of his inner insecurities. The theater of the mind is laid open, and the audience can only watch as silent spectators of the tragedy that repeats itself irredeemably in Josh’s guilt-ridden thoughts. The opening layout was also very effective, as the audience walked in to find bodies strewn about in the centre of the stage, abusable and vulnerable, as Echosmith’s ‘Cool Kids’ rang out forebodingly.

However, the production’s attempts to sophisticate the play fall short because of the very nature of the play. True to its educational purposes, the play is short, simple, and often risks being stereotypical and reductive for the sake of accessibility. There is a lack of any solid plot development, and this fails to give due subtlety to the tragedy. Flat characters seem too much like caricatures of overused tragic tropes, despite the cast’s efforts to blow life into them. The cast was strong overall, and created a poignant chorus of guilt voiced by the shooting victims. The fluid coordination, especially in the hunting scene, was well-executed and adroitly played with different ways to build tension. Unfortunately, their enthusiasm and potential was often wasted on poorly developed characters that never materialized as relatable personas. The only character that was written with any room for interesting interpretation was Josh, and Leo Danczak thoroughly took advantage of this potential to create a delightfully nuanced character that I suspect had much more depth than Matrosimone’s original.

The production’s attempts to sophisticate the play fall short

School shooting is an increasingly alarming problem that is as relevant and close to heart as when the play was first published in 1999. The production’s recognition of the play’s real-life significance was evident in their decision to donate all profit to Kidscape, a UK charity that works to prevent school bullying. Given how gun violence is often directly linked to school bullying, helping victims of bullying like Josh who feels like ‘a balloon in a world full of sharp things’ is a necessary step to prevent further tragedies. It is admirable to see student drama concerned with raising awareness as well as offering direct help to combat society’s emergent problems. This production of ‘Bang Bang You’re Dead’ was a commendable choice in terms of its pertinent message.

Overall, ‘Bang Bang You’re Dead’ showed a production that worked hard to compensate for the weak script. There was a touching attention to detail in terms of costumes and lighting, from Josh’s half-open backpack to red-lighting showering down on the statement ‘Everybody in this class is dead meat’ that was reminiscent of a butcher-shop. The cast showed dedicated acting with occasional moments of powerful emotion. However, both the production team and the audience deserved a better play.

Where the Wild Things go POP