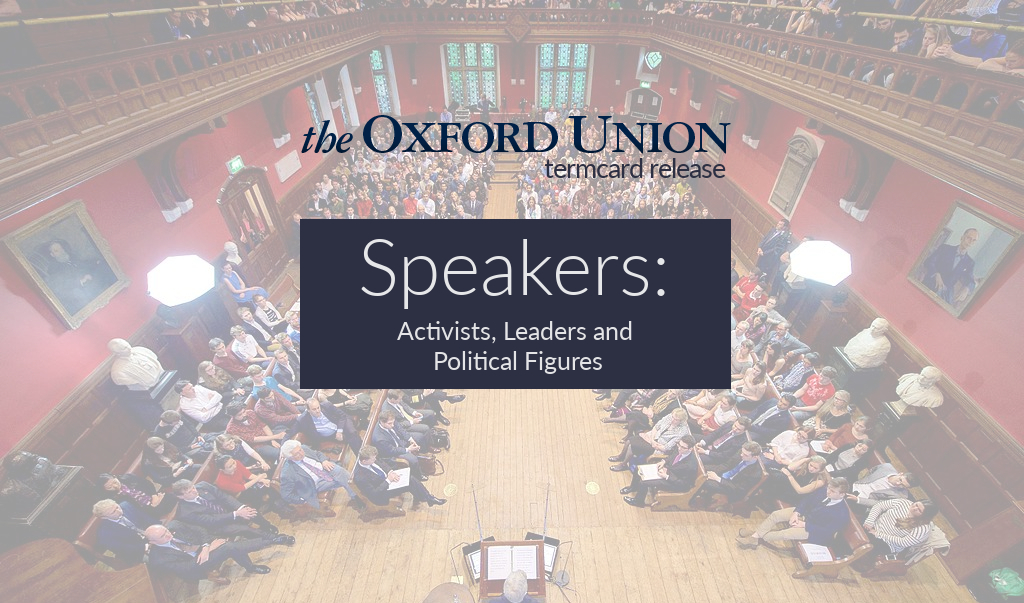 We’re very excited to announce exclusively the term card release for The Oxford Union’s speaker, debate and panel events this Hilary! Check out the website for releases and running commentary on speakers by our editorial staff. If you just can’t wait, follow us on Twitter and Facebook for teaser quotes throughout the day.

Today we have the second part of the Union’s speakers for Hilary term (and the final part of our termcard release). Speakers range from political leaders and activists to high-profile businessmen, with big names including Steve Forbes,  Andrea Leadsom and Khizr Khan.  TBC dates for speakers are expected to be announced in the following weeks. Without further ado: 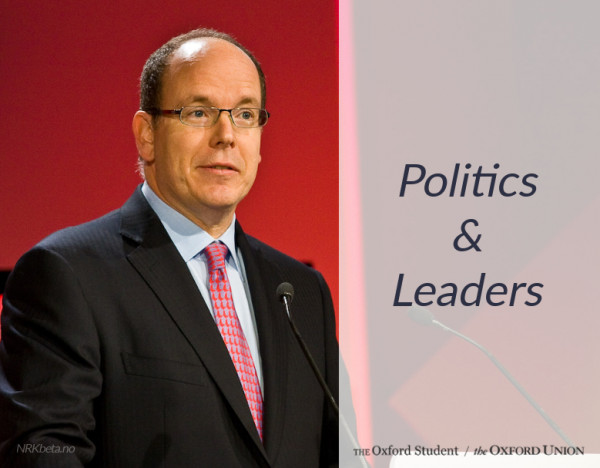 Andrea Leadsom MP: Having served as MP for South Northamptonshire since 2010, Leadsom was a vocal member of the Leave campaign during the EU referendum, after which she ran for leadership of the Conservative Party, losing out to Theresa May. She was later appointed to the Cabinet as Secretary of State for Environment, Food and Rural Affairs. Previous posts include Economic Secretary to the Treasury and Minister for Energy, and Leadsom has also worked in the financial sector. (Friday 3 February, 5:00pm)

Albert II, Prince of Monaco: the reigning sovereign Prince of Monaco, Albert II has assets valued at more than $1 billion. The Prince has aimed to continue a policy of promoting environmental awareness, and was awarded the Roger Revelle Prize in 2009. A keen sportsman, he has also competed at five Olympic Games and is a member of the International Olympic Committee. Prince Albert is the only incumbent head of state to have reached both the North Pole, in 2006, and the South Pole, in 2009. (Monday 6 February, time TBC)

Robby Mook, the first openly gay manager of a major presidential campaign, ran Hillary Clinton’s bid in the 2016 election. A Democratic activist since college, Mook has served on state legislature campaigns, the DNC and the Democratic Congressional Campaign Committee, as well as Clinton’s 2008 race. Previous campaigns include the election of Democratic Governors in Virginia (2013) and Maryland (2006), and of Senator Cardin (2006). (Wednesday 8 February, 8:00pm)

Artur Mas: President of Catalonia for five years, Mas served until 2016. Originally from Barcelona, Mas is a supporter of Catalan independence. As President, he proposed the 2014 self-determination referendum, which was defeated by Spanish parliament. The government claims the vote is unconstitutional and Mas has been charged by Spain’s Attorney-General of perverting the course of justice, misuse of public funds and abuse of power. In 2015, he resigned from his seat in parliament. (Wednesday 1 March, 8:00pm)

Shehbaz Sharif is a Pakistani politician and the current Chief Minister of Punjab. He is brother to the current Prime Minister of Pakistan and President of the Pakistan Muslim League, Nawaz Sharif. He has served in the National Assembly of Pakistan and as Punjab’s Leader of the Opposition. After a military coup deposed the government in 1999, Sharif spent years of self-imposed exile in Saudi Arabia, returning to Pakistan in 2007. (Tuesday 7 March, 8:00pm)

Jeh Johnson: Since 2013, Johnson has served as Secretary of Homeland Security under President Obama, and was responsible for Homeland Security’s response to the Ebola crisis, as well as overseeing the executive action designed to address the 11 million undocumented immigrants in the United States. Johnson was previously a leading law firm’s first African American partner and General Counsel of the Department of Defense. (Wednesday 8 March, 8:00pm)

Dilma Rousseff: Prior to becoming Brazil’s 36th President, Rouseeff started in politics as a Marxist guerrilla fighting the dictatorships in the 1960s, for which she was imprisoned. She went on to work in economics, state politics and as President Lula’s Chief of Staff. During her five year administration protests were organised around accusations of her involvement in the Petrobras scandal, and she was ranked fourth in Forbes’ 2014 list of the most powerful women in the world. In August 2016, Dilma was impeached for allegedly violating budgetary laws, a charge which she denies, calling her removal a “legislative coup d’état”. (Date TBC)

Joyce Banda: Africa’s second female president, Joyce Banda is a Malawian politician who served as Vice President from 2009 to 2012 and as President from 2012 to 2014, following the death of President Bingu wa Mutharika. In 2014, Forbes named President Banda as the 40th most powerful woman in the world. In 2012 she announced her intention to overturn Malawi’s ban on homosexuality, but a brief success has since been overturned by 2015’s Marriage, Divorce and Family Relations Law. She has announced her willingness to run in the 2019 Presidential election. (Date TBC) 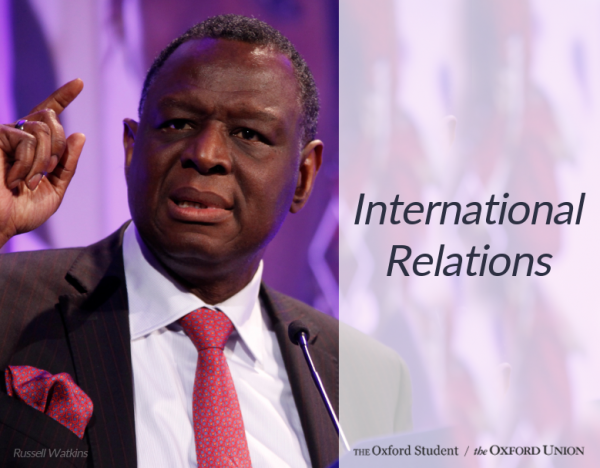 Ahmet Uzumcu is the Director-General of the Organisation for the Prohibition of Chemical Weapons, which was awarded the Nobel Peace Prize under his leadership in 2013. Prior to his appointment in 2009, he served as the Turkish Permanent Representative to the United Nations Office at Geneva. This year, the OPCW celebrates its 20th anniversary, and is currently investigating the threat and use of chemical weapons in Syria. (Monday 20 February, 5:00pm )

Irina Bokova is the current Director General of UNESCO, the UN agency for worldwide educational, scientific and cultural co-operation. She is a Bulgarian politician and was previously Ambassador to France. Bokova is the first female Director General, and since starting in 2009, Bokova has sought to address education, gender equality and sustainability. She has been attempting to end trade in looted Syrian and Iraqi cultural artefacts, previously a source of funding for ISIL. (Monday 6 March, 5:00pm)

Babatunde Osotimehin is head of the United Nations Population Fund, the world’s largest source of funding for population and reproductive health. Before becoming Under Secretary General of the United Nations, he was Minister of Health in Nigeria and for many years led the nation’s work with HIV and AIDS. Osotimehin’s tenure at UNFPA has seen him continue to focus on supporting young people, addressing sexual health and seeking to achieve gender equality. (Date TBC) 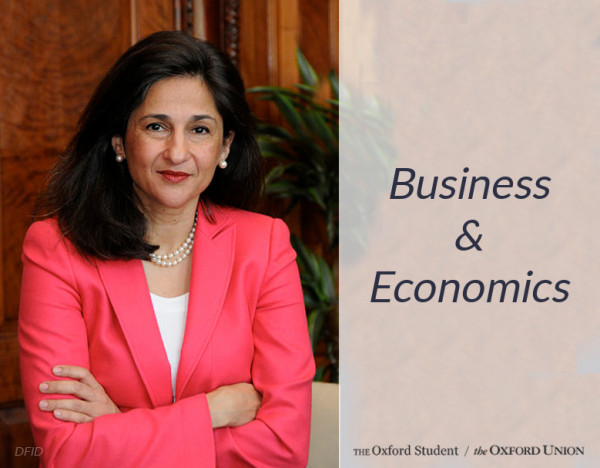 John Hennessy: described as the ‘godfather of Silicon Valley’, Hennessy served as the tenth President of Stanford University. Prior to joining the University, he co-founded the technology companies MIPS and Atheros. After more than fifteen years at Stanford, Hennessy continues to sit on the boards of Google and Cisco. (Wednesday 18 January, 5:00pm)

Steve Forbes: As the editor-in-chief of Forbes, the business magazine best known for its lists of powerful and wealthy individuals, Steve Forbes is one of the world’s most successful publishing executives, with a reported fortune of $430 million. Forbes was also twice a candidate for the Republican Presidential nomination. Forbes supported Donald Trump throughout the presidential election, claiming he was “absolutely unique”. (Tuesday 14 February, 8:00pm)

Mark Cuban: The owner of the NBA’s Dallas Mavericks and an outspoken entrepreneur, Mark Cuban sold Broadcast.com for $5.7 billion in 1999. He has appeared on various television shows, including Dancing with the Stars and Shark Tank, and also chairs the cable network AXS. He has accrued NBA fines totalling more than $1.5 million over the past fifteen years. Cuban is a philanthropist and activist, supporting causes including ‘Fallen Patriots’ and the Clinton campaign, notably disparaging Clinton’s opponent Donald Trump. (Friday 24 February, 5:00pm)

Dame Minouche Shafik: The next Director of the LSE, Dame Minouche has shaped economic policy around the world. Currently the Bank of England’s Deputy Governor for Markets and Banking, Shafik was involved in preparations for the EU referendum, and delivered wide-ranging reforms to financial markets after banking scandals. She was also IMF Deputy Managing Director at the height of the Eurozone crisis, Permanent Secretary of the Department for International Development, and the World Bank’s youngest ever Vice President. (Wednesday 22 February, 8:00pm)

Bob Diamond: As Group Chief Executive of Barclays in 2011-12, Diamond was an influential figure in the financial sector, described as “the unacceptable face” of banking by business secretary at the time Lord Mandelson. He resigned in 2012 following the scandal surrounding the manipulation of Libor interest rates. As the founder of Atlas Mara, he continues to work in the banking industry, and aims to tap into rapid economic growth across Africa. (Monday 6 March, 8:00pm) 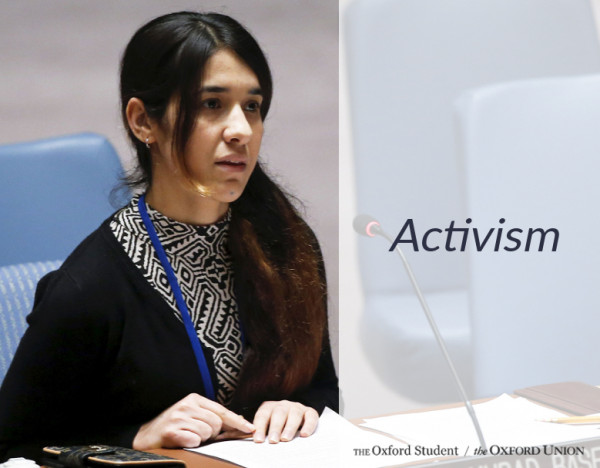 Nadia Murad: As a member of the Yazidi community, Nadia Murad’s life changed forever in 2014, when ISIL attacked her village. Murad was sold into sexual slavery, facing unimaginable brutality every day until her escape. She now speaks out about ongoing genocide and war crimes, and campaigns with Amal Clooney to prosecute ISIL leaders at the International Criminal Court. Murad was nominated for the Nobel Peace Prize, and is the first UN Goodwill Ambassador for the Dignity of Survivors of Human Trafficking. (Wednesday 1 February, 8:00pm)

Tawakkol Karman: Upon receiving the 2011 Nobel Peace Prize, Tawakkol Karman became the first female Arab recipient, and the youngest Peace Laureate in history (remaining the second youngest to date). A co-founder of the group ‘Women Journalists Without Chains’, she became the international public face of the 2011 Yemeni uprising that constituted part of the Arab Spring, and has been called ‘Mother of the Revolution’ and ‘Iron Woman’. She has recently vowed with other Laureates and global leaders to end child slavery. (Tuesday 7 February, 5:00pm)

Moazzam Begg was detained by the US Government in Bagram and Guantanamo Bay for almost three years, having admitted support for extremists in Bosnia and Chechnya. He was held as an enemy combatant, accused of being an Al Qaeda member, until his release in 2005 without charge. During his detention, Begg witnessed and experienced abuse at the hands of American soldiers in Bagram. He is currently the Outreach Director at CAGE, and has spoken extensively about his experiences, alongside challenging the scope of Western anti-terror measures. (8th week, date TBC) 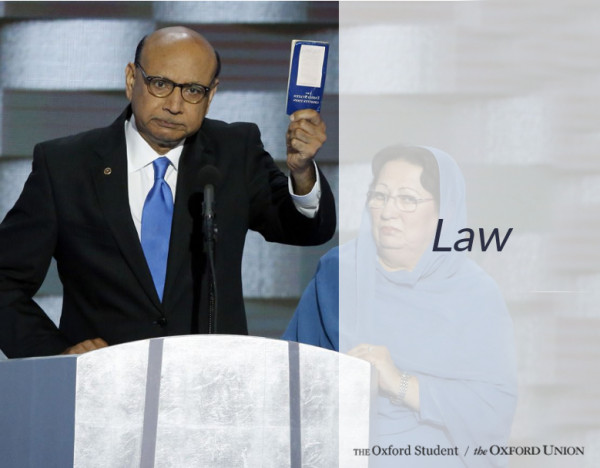 Shirin Ebadi: The first ever female Iranian judge, Shirin Ebadi became President of Tehran City Court before all female judges were demoted upon the Islamic Revolution. She subsequently worked as an academic and eventually rejoined the legal field, representing women and children and defending other dissidents pro bono. Her efforts earnt her a Nobel Peace Prize, but she now lives in exile in the UK, continuing to criticise oppression by the authorities while opposing Western interference in Iran. (Thursday 16 February, 5:00pm)

Donald Verrilli successfully defended the constitutionality of Obamacare, delivering the argument on behalf of the Obama Administration that same-sex marriage ought to be legalised throughout the United States. Slate subsequently wrote that ‘every gay and lesbian American who exercises their right to wed has Verrilli to thank’. A distinguished lawyer, he represented the US Government before the Supreme Court from 2011 to 2016 in his capacity as Solicitor-General of the United States. (Tuesday 28 February, 8:00pm)

Khizr Khan: During the most recent Presidential campaign, Khizr and Ghazala Khan delivered a poignant message at the Democratic Convention, citing the constitution to Donald Trump. As the parents of Captain Humayun Khan – a Muslim-American soldier killed in action in Iraq – they famously declared, “You have sacrificed nothing—and no one.” Mr Khan, a lawyer who studied at Harvard, offered Donald Trump his copy of the constitution. (Thursday 2 March, 5:00pm)

The Union also announced their Ball, due to take place in the mezzo del cammin of term in 4th week and centered around Dante’s Inferno.

And that concludes the Oxford Student’s release of the Union Termcard for Hilary 2017! Let us know what events have grabbed your attention at [email protected] and keep an eye out for the term’s first print edition of the paper, which comes out tomorrow.