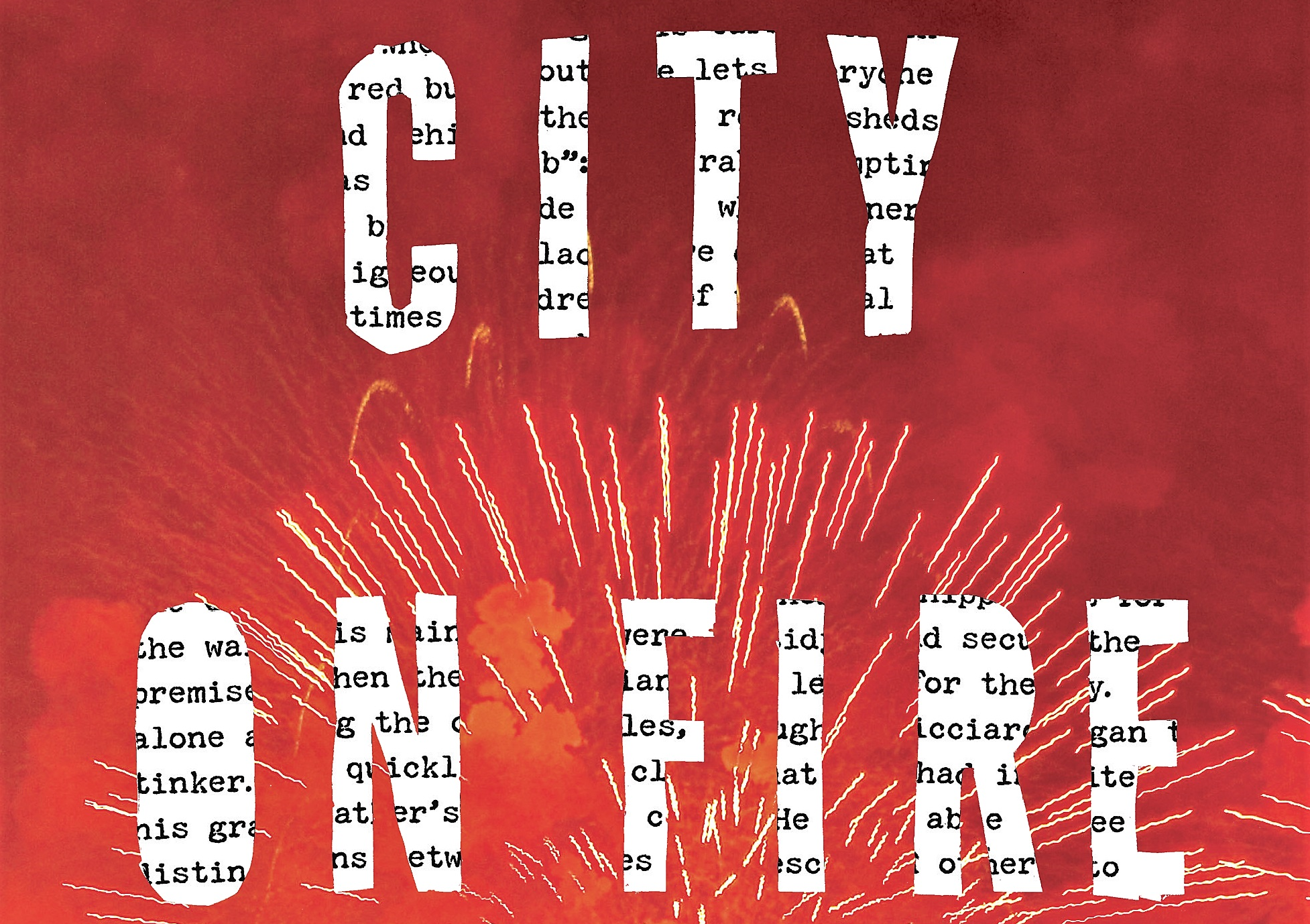 Relentless, unique and wildly engaging, City on Fire by Garth Risk Hallberg is an epic character study set in 1970s New York, a city becoming rapidly enveloped in mystery and descending into chaos. The narrative details the interlinking lives of an intimate group of New Yorkers over a six-month period beginning on New Year’s Eve 1976 and leading up to one night in July 1977 when the city is consumed in the unnerving darkness of a blackout. Numerous voices are heard through constantly shifting perspectives, as the characters’ paths are shown to be increasingly intertwined, and the personal intrigue intensifies. These insights are organised into eight ‘books’ of differing lengths, interspersed with creative and varied ‘interludes’, with the final product a somewhat daunting tome totalling over 900 pages in its paperback edition.

City on Fire’s imposing length and complex form is truly its greatest triumph, although the success of Hallberg’s ambitious undertaking is initially unsure. The extensive expository description in the opening chapters seems, at first, to foster disenchantment with the novel’s epic proportions, dramatically limiting the pace to one noticeably more hesitant than in the novel’s latter stages. However, in a remarkable show of authorial craftsmanship, this agonisingly slow movement of time is transformed into a narrative success, as readers are led to await the stroke of midnight along with the characters. The necessity of creating a strong foundation upon which to mount the novel’s epic plot is clear, but by aligning this essential exposition with the New Year’s Eve anticipation the otherwise frustrating pace becomes effective, rather than simply functional. Indeed, this is a novel epic not just in length, but in style; theatricality and creative magic permeate to its very core, through an energetic prose that captures the plot at its most lacklustre and hurriedly leads it down another darkened avenue of New York City. The prose style is consistently striking, most notably in its sublime manipulation of syntax in order to convey the moods of characters. Pace, too, is beautifully modified by the prose throughout, with the varying sentence length and structure reflecting, at a micro level, the novel’s wider structure with its multiple eccentricities and nuances. Granted, this noteworthy prose is not without a discernible air of pretension at times, but this is hardly unbefitting of the characters portrayed within, many of whom recognise the privileges they themselves encompass. As a result, Hallberg’s style emerges as one which demands to be appreciated as a literary talent, rather than necessarily enjoyed by the reader, although this misplaced intention is rectified by the brilliance of the conclusion, which more than justifies any such affectation.

As for the plot, it’s a unique blending of multiple approaches, where sophistication meets soap opera, but without reliance on base human drama, where the relationships of the characters are punctuated with criminality and intrigue, but with seductive hints of fantastical elements in defiance of the realism of the plot. Frequent changes of focus examine the lives of the protagonists (and even secondary characters) in turn, reaffirming the central focus of this novel to be human emotion, enacted. The rapidly alternating viewpoints may lend themselves to the effect of human drama, but in reality Hallberg’s ambitions extend far beyond this. The novel’s unexpected creative interludes attest to this fact –  letters, fanzines, emails and artwork provide original and fascinating illuminations of plot while simultaneously demonstrating the lengths to which Hallberg has gone to provide his characters not just with plotlines, but with fully-formed lives extending almost beyond the boundaries of the text. Such excerpts also give way to personal introspection, leading to philosophical depths that give this novel an edge as one fascinating for its psychoanalytical qualities, as well as its elaborate connections spanning the novel. However, City on Fire is a mystery at heart, and these interludes crucially serve to reinforce this to readers, presenting carefully contrived snippets of explicit evidence in intricate juxtaposition to all that is so subtly and brilliantly implied elsewhere.

Curious, ingenious, fabulous: City on Fire in its entirety is a gift to the reader, a 900-page investment that is part psychological study of the criminal mind-set, part a social history of urban bohemia. But above all it is a testament to the depths of human emotion, exploring love, obsession, fear and loneliness all with Hallberg’s faultless panache. The result? An epic, cryptic pleasure that generously rewards the reader until the final word.

Recipe for a Rom Com