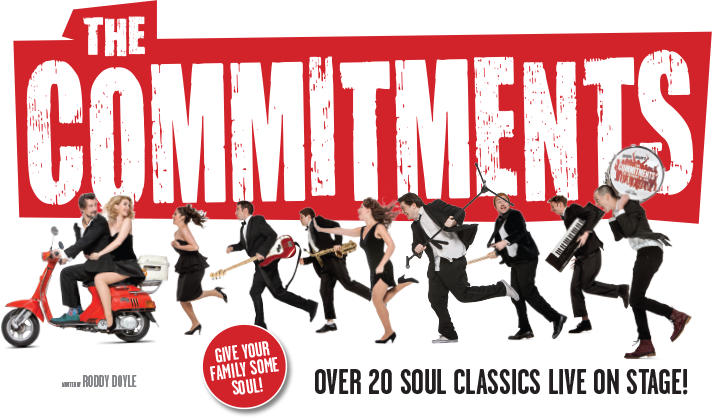 That I now want to go and read the book of The Commitments is testament to its success in performance. Energetic, spectacular but also sensitive and in possession of a raw charm, Jamie Lloyd’s production had me beaming from start to finish. The musical is adapted by Roddy Doyle from his original novel and is crammed with recognisable soul music such as ‘I Heard It Through the Grapevine’ and ‘Mustang Sally’. Set in 1980’s Dublin, the story centers around Jimmy Rabbite who shapes a group of musicians into a soul band called ‘The Commitments’. We are absorbed into the world of their rugged but spirited rehearsals, their initial gigs and their showstoppers. Jimmy prides the band on being a democratic unit; however, cracks begin to emerge as we witness the fraught relationship between the lead singer Deco and the rest of the band. So we follow their fall as well. Joey “the lips” Fagan leaves for America, the lead singer Deco declares his pursuit of a solo career and saxophonist Dean moves towards a career in Jazz. At the centre of this remains Jimmy – played by Andrew Linnie – a figure who addresses the audience with confident friendliness, using us as his confidante during the band’s combustion. Linnie’s ‘Mr. Pitiful’ was poignant and funny, giving the show a beautiful accessibility that is both rare and magical.

Jamie Lloyd’s production had me beaming from start to finish.

As to be expected, the cast was stunning across the board. Sam Fordham gave a brilliant performance as Mickah, the band’s body-guard and later, their drummer. Hilariously obtrusive, Fordham showed true commitment to the character both in terms of his spindly yet swaggering physicality and bolshie, obnoxious outbursts. The standout performances for me, however, came from the women. Leah Penston as Imelda brought a fierceness to her role that was subtle and controlled; Christiana Tedders as Bernie had a richness to her voice that I couldn’t help but notice. What I loved about Tedders’ performance in particular was how much fun she seemed to be having onstage: her character was truly alive and therefore extremely watchable. The three women – Bernie, Imelda and Natalie – worked exceptionally well together, always aware of one another and extremely synchronized in their choreography. With the interaction between characters in mind, I thought more time could have been spent establishing the hostility between Deco and the rest of the band in the first half of the show. As such, the self-driven arrogance of Ben Morris’ Deco – which was undoubtedly powerful – escalated a bit too quickly and with not enough foundation. Yet of course this is a very minor quibble, and somewhat forgivable due to the excellence of the second half.

My favourite scenes were those of the band’s rehearsals: they were perfectly unpolished. In the show Jimmy says, “soul is the music people understand. Sure it’s basic and it’s simple. But it’s something else ’cause, ’cause, ’cause it’s honest, that’s it. It’s honest.” And it’s fair to say that the cast gives us just this. They seize upon the buzz and excitement of their new projects effortlessly, capturing the rugged charm of soul music with ease. This gives us gorgeous moments of intimacy: we were very much part of their journey rather than merely observing it. They manage to avoid the trap that so many long running shows can fall into: being so rehearsed that the performance becomes artificial, with no spark or excitement. I loved the use of lighting in these scenes, too: stark and bare, it perfectly mimics the unembellished, slightly rough around the edges nature of the band’s beginnings.

In terms of the music, ‘Thin Line Between Love and Hate’ was a particular highlight for me, as was ‘I (can’t get no) Satisfaction’. The former was sensitive and really capitalized on Morris’ superb vocals; the latter was compelling and absorbing in its playfulness. ‘Think’ was another favourite, displaying the female performers’ beautiful vocal strength. The way ‘The Commitments’ performed as a live band alongside the orchestra captured the dynamism of a music concert whilst also maintaining the absorbing narrative of Roddy Doyle’s play. I would thoroughly recommend this show as an engaging spectacle with moments of stunning sensitivity, a truthfulness that truly captures the essence of soul music. Highly entertaining, The Commitments is definitely worth a watch