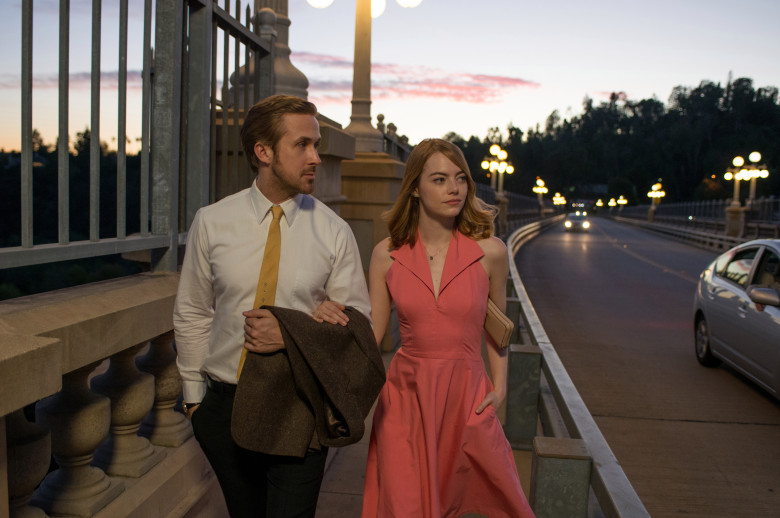 La La Land opens with a Los Angeles traffic jam like no other, with disgruntled drivers euphorically bursting into ‘Another Day of Sun’, proving that the movie musical can transform the most mundane situation into a carnival. This promises 128 minutes of sickly hyper-happiness, with jazz hands and smiling faces to spare. And whilst viewers do go on to spend half the time experiencing the ecstasy Chazelle’s world has to offer, we also deal with the inevitable sadness that comes with it.

Damien Chazelle, who directed and wrote best film of 2014 Whiplash, brings us the story of   struggling actress Mia (Emma Stone) who serves coffee in between running from one hopeless audition to the next. On her way home one night, she is enchanted into an underground hazy nightclub by the echoes of a gorgeous piano number, discovering Seb (Ryan Gosling), a jazz musician demoted to playing Christmas jingles to disinterested customers. Not only is this the most beautiful scene in the movie, but it sets up one of the best on-screen love stories of recent memory, and does so through a seemingly archaic form: the original movie musical.

This genre never really went out of vogue, but shapeshifted into a series of box-office breaking stage-to-screen adaptations (Les Miserables, Mamma Mia! and Sweeny Todd to name a few). However, classic movie musicals are much more few and far between, tending to be made on a smaller-scale, such as 2016’s excellent indie flick Sing Street. La La Land is an ambitious departure from both of these, and boy does it pay off.

To the modern viewer, however, it is both startling and incredibly refreshing to see the act of ‘falling in love’ not drowning under cynicism, sex and sociopaths.

La La Land is essentially a self-conscious billet-doux to the timeless MGM productions of yesteryear and the golden age of Hollywood. From the nostalgic Singin’ In The Rain! font to the tracking shot across paintings of Monroe, Chaplin, Burton and Taylor, the film’s influences are around every corner. At one point, Mia stands in front of a screening of Rebel Without a Cause, channelling the era through a different body in a different time.

Yet the film refuses to be saturated by vintage sentimentality, maintaining a here-and-now feeling from beginning to end. This is achieved through a tricksy narrative style (neat switches in perspective) and punchy, fresh dialogue. The movie does not, for one minute, let us dwell too much in the past.

To the modern viewer, however, it is both startling and incredibly refreshing to see the act of ‘falling in love’ not drowning under cynicism, sex and sociopaths. La La Land explores the meeting of two young dreamers who fall in love because of no other reason than each other, a concept that is too often muddled in film due to a fear of the cliché. Yet La La Land pulls it off with class, capturing the beauty and woes of love with a harmonious marriage of image, narrative and a devastating score (the music really is breath-taking, shout out to Justin Hurwitz and his genius). Tonally balanced to perfection, the conflicts between artistic ambition and romantic relationships (a nod to Whiplash is due here) creep into the films second half, celebrating love and revealing its inevitable trappings in a tender, incredibly human way.

Gosling’s self-deprecating, slow-burning charm is perfectly matched alongside Stone’s energetic and playful wittiness, creating an onscreen couple for the ages. La La Land is a film for those who have a dream, love the arts or love someone per se. Mesmerising, moving and thoroughly euphoric, open your heart to La La Land.