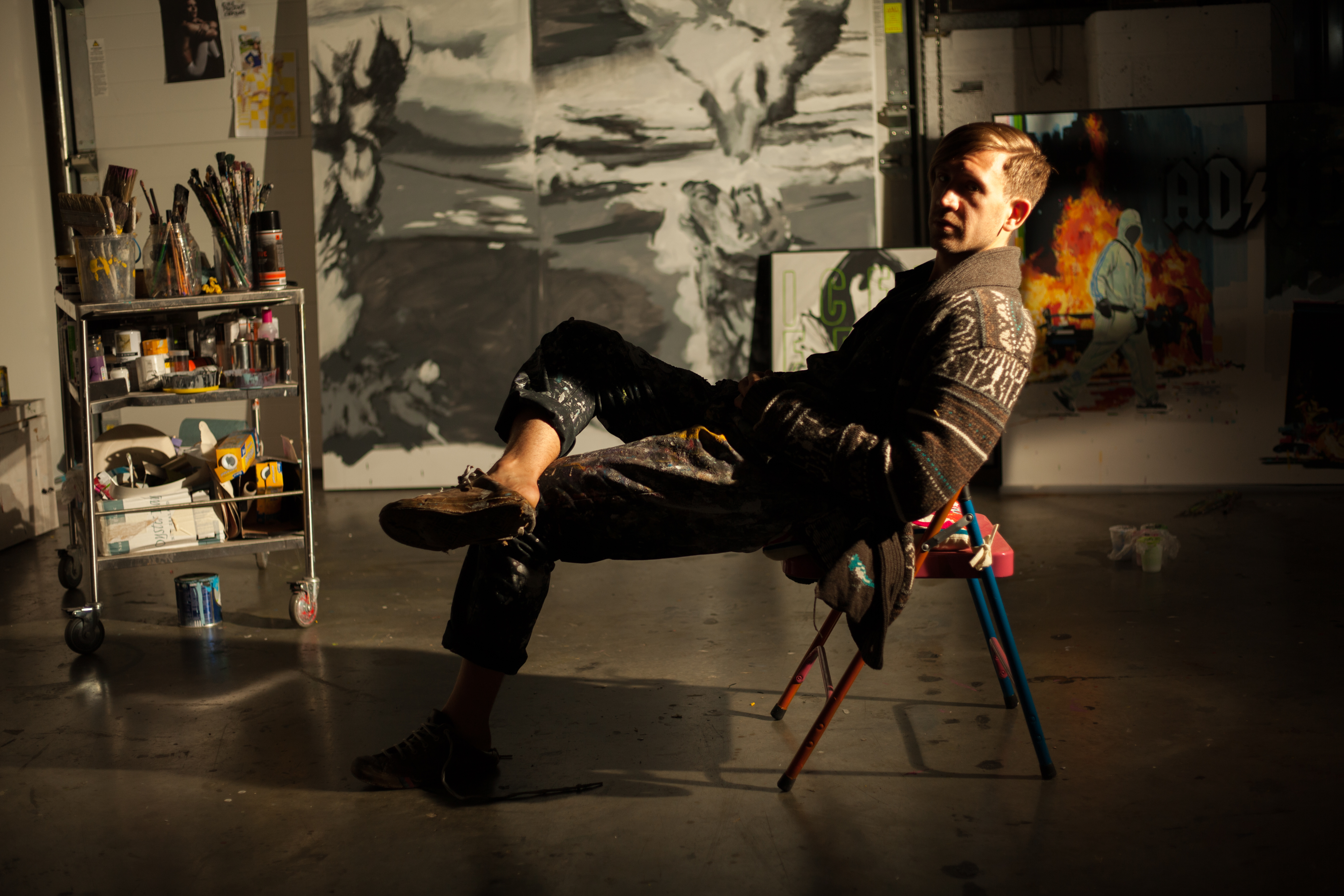 Stuart Semple is an artist whose work is known for his bold, eclectic pieces that examine aspects of contemporary society. He also creates many large scale public projects, such as Something Good, which saw him come here, to Oxford, to give away 1000 limited edition printed balloons which raised awareness for egg donation. Despite currently travelling around the country, Stuart is very keen to talk to me, and I am happy to see his email responses share the same cheery and animated countenance as his artwork emanates.

Recently, Semple has been the subject of media attention for developing the world’s ‘pinkest pink’- a pigment available to everyone ‘except Anish Kapoor’. Such actions come in reaction to renowned artist and sculptor Anish Kapoor’s purchase of the exclusive rights to the world’s ‘blackest black’, which was developed in 2016 by nanotechnology company, Nanosystems, and is capable of absorbing 99.6% of light. Such exclusive ownership of this new pigment has understandably angered the wider art community and Stuart in particular, who feels robbed of an opportunity to experiment with a new medium.

The injustice was made more severe as last week it emerged a gallery had purchased Semple’s Pink on Kapoor’s behalf, circumventing the legal agreement that required customers to confirm they are ‘not Anish Kapoor, in no way affiliated to Anish Kapoor, [and] not purchasing this item on behalf of Anish Kapoor or [as] an associate of Anish Kapoor’. Stuart is understandably frustrated. He explains his disappointment to me:

“I’m shocked he [Kapoor] stopped that low, now he knows how sad we all were when he didn’t share his colours with us. I didn’t expect him to get his gallery to buy some on his behalf just so he could give us all his middle finger on Instagram. Quite frankly I think he should say sorry for hurting everyone’s feelings and give me my pink back. Maybe if he had of asked nicely I would have let him have a go. Don’t forget he started it.”

Stuart sees Kapoor’s actions as particularly childish, especially coming from an established and well renowned sculptor. “He’s old enough to know better! He can easily collaborate with the creators of Vantablack without barring every other artist from doing so at the same time. He’s a very rich very powerful man who should be setting a better example. It’s a total ego trip.”

Much of Stuart’s work often takes place in the public domain, and is accessible to everyone. For example, in 2009 Stuart created a project called ‘Happy Cloud’, where, as the name suggests, he released thousands of smiley faced clouds made of helium and soap from the Tate Modern which went on to float towards the city of London. Given Stuart’s focus on large scale, positive and public artwork, I ask if he finds Kapoor’s purchase particularly affronting – surely such ownership seems directly antithetical to the ethos behind Semple’s own work. He agrees; “All my public pieces are about generosity and I try my best to convey some kind of happiness. Hoarding and meanness are very unattractive traits. Art should be shared and it it should be available to anyone that wants it”.

Anish Kapoor’s sculptures often involve huge, immersive shapes which engage with the viewer’s surroundings to create potent sensory experiences. Just one example is Chicago’s Cloud Gate, affectionately nicknamed ‘the bean’; a huge giant reflective disc which distorts the viewer’s surroundings. With such imaginative and transformative sculptures, I have no doubt Kapoor will use Vantablack in exciting and similarly immersive projects – but I can’t help but wonder if any singular piece of art will warrant removing the opportunities for other artists to play with such a unique, disorientating and enveloping substance. Interestingly, Stuart agrees, and acknowledges that Anish’s actions actually work to counter Anish’s own art: “his public pieces are amazing and for everyone to enjoy, so in a lot of ways his use of Vantablack is anti his own ethos”.

Although arguably selfish, Kapoor has not been the first artist to exclusively own a colour before. In 1960, Yves Klein developed and trademarked International Klein Blue for his own exclusive use. Semple however, believes there is a distinction between Klein and Kapoor’s actions. “I think Yves Klein’s blue is very different from Vantablack. That blue was something that he created and a colour that made a conceptual point, whereas Vanta was made by a nanotech company. Anish struck a dodgy deal with them so they would only coat his art in the stuff and not work with any other artists.” Further to this, Semple thinks Kapoor’s actions are directly damaging to the wider artistic community: “The community is everything, art is about sharing and building together. Colour is really important it’s a sensory experience and nobody should be excluded from that. I believe in freedom and collaboration more than I believe in greed, ego and competition.”

“I believe in freedom and collaboration more than I believe in greed, ego and competition”

Luckily, Stuart has found the public not only amused by the exchange, but also supportive of his campaign. “It’s been beautiful to see so many people calling him out on his behaviour.” The public have also been extremely supportive of Stuart’s Pink, and it has sold out several times on his website. The brilliance of Stuart’s pigment lies not only in the fact that it’s a great colour in itself, but also because it is demonstrative of how sharing materials can benefit the wider community. “I’ve been blown away, thousands and thousands of people from all over the world are making incredible things. Sculptures, paintings, make up, performances even dying their cats and hair. I’m so glad that I decided to let everyone have a go with my colours rather than hoarding them all for myself to only use in my own work. Having the community onboard is going to help me make even better materials for everyone!”

Despite such a successful response, Stuart doubts Vantablack will ever be available for public purchase in the future, as he doubts it would be economically viable for the company. “Of course I want him to tear up that exclusive agreement but I don’t think it’s going to happen”. The injustice sadly lingers for Stuart – “We will never get to see what another artist besides Kapoor could realise with the stuff.”