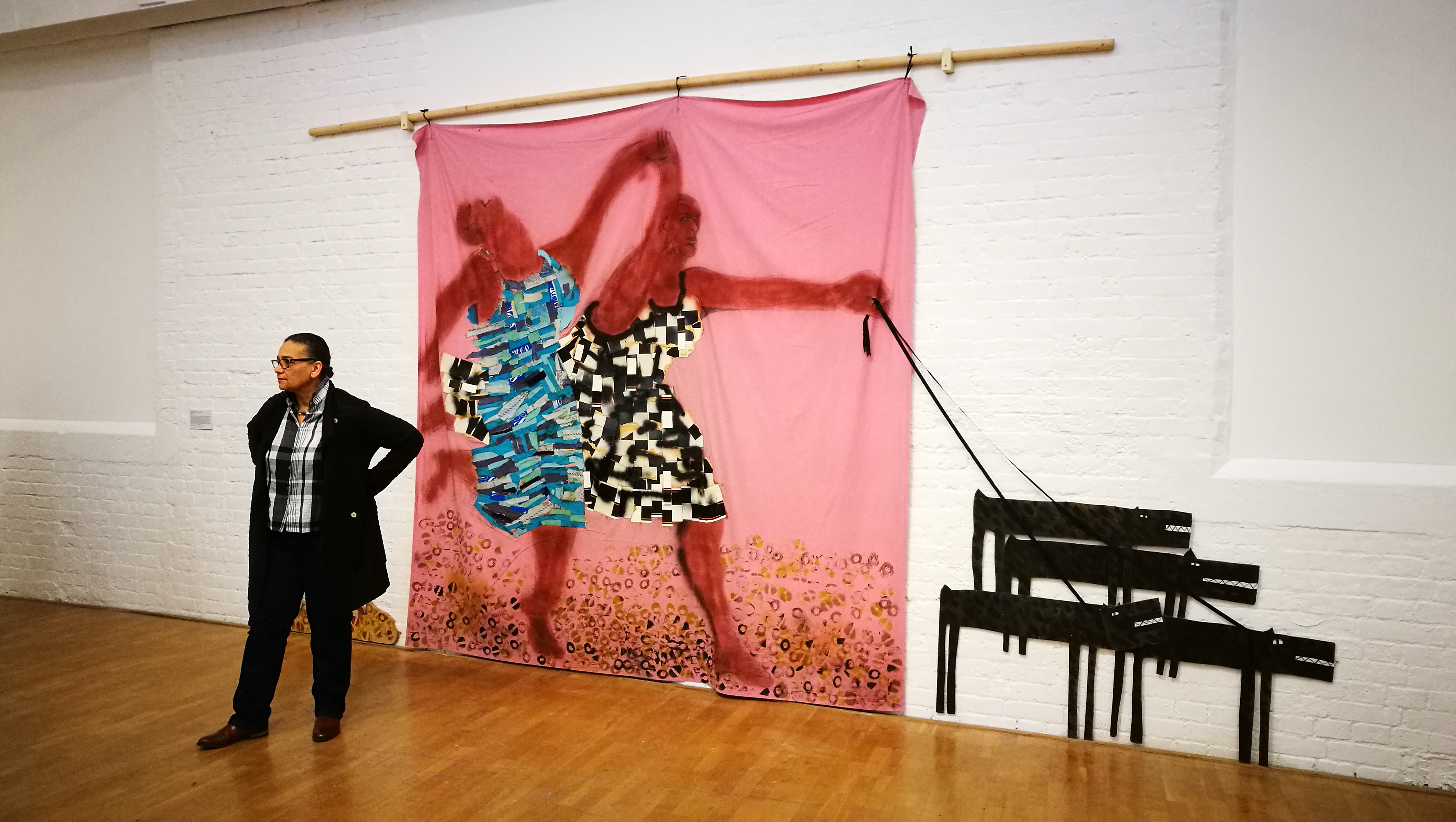 Born in Tanzania but relocated to London at a tender age, Lubaina Himid is one of the pioneers of the British Black Art Movement. Growing up with her African inheritance on one hand and British culture on the other, Himid projects her mixed cultural background onto a variety of rich, distinctive images reflecting the clash between two very different, if not opposite, realities. Through abstract forms and sharply contrasting colours, Himid channels into her works her experience as a black, female artist who has experienced various levels of discrimination in the 70s and the 80s, giving each piece of her art a silent yet defiant voice.

Under the fitting title of Invisible Strategies, the newly opened exhibition in Modern Art Oxford puts together a wide range of Himid’s works. Spanning from the 1980s to the present day, it offers the audience the privilege to survey her art alongside the artist’s own life and development. It gives us a unique opportunity to sense how her art evolves over the years, to compare, and to grasp the essence, the central message that Himid always wants to convey to the world, even though in many cases that message is a highly encoded one.

Spread across three galleries, the exhibition can be loosely divided into two groups, based on the medium Himid uses. The first group is mainly occupied by painting – brushworks on canvas or other blank surfaces – while the second are built on auxiliary images found in newspaper and ceramics. In each group we also find her exploring different methods of expression: the paintings are full of metaphors, and their message is so well hidden that it is hard to fully comprehend its meaning without long-time contemplation and some background digging. The second group, however, adopts a much more straight-forward method of storytelling, and directly confronts the eyes of the audience.

Himid channels into her works her experience as a black, female artist who has experienced various levels of discrimination in the 70s and the 80s, giving each piece of her art a silent yet defiant voice

To demonstrate, we will, in the following, draw examples from all three galleries and offer you a glimpse of Himid’s artistic statement, yet not to the degree of spoiling the exhibition.

The first work that we wish to consider is Freedom and Change, a piece that will catch every visitor’s eyes upon entering the gallery. A response to Picasso’s Women Running on the Beach (1922), the motif explores the movement of those two majestic females with a twist: two allegorised figures, with their dark skin and garment consisting of collage from a range of ready-made materials – themselves as Freedom and Change embodied – convey a message that calls for the overturning of colonial oppression. Himid vents her engagé stance through a pictorial dialogue that transforms the Spanish master’s neo-classical work into an emancipatory élan. However, not content with just referencing the European modernists, she has also developed recurring images depicting the sea and the history of colonialism therein enacted. The viewer is constantly drawn into a confined space with a window looking out to the sea, an image that connects Revenge and Le Rodeur, two other series marking different periods of Himid’s career.

The works displayed in the Middle Galleries bridge those in the Upper Gallery and the adjacent space, with works that assimilate textile patterns in East Africa, and stimulating aphorisms. The relatively small canvases offer respite from the caustic questions about imperial plunder by directing our attention to the graphic exploration of Himid’s cultural identity.

Piper Gallery houses a collection of over-painted newspaper and a phalanx of uncanny crockery. The ongoing project, Negative Positives, launched in 2007, intervenes and interprets the coverage involving black people with a vocabulary unique to Himid, ranging from seemingly whimsical drawing to emphatic Warhol-esque repetition of images connoting racial bias. Marking the bicentenary of the Abolition of the Slave Trade, Swallow Hard: The Lancaster Dinner Service (2007) dares the audience with chinoiseries interpolated with the pensive face of an African man, or the plantation landscape overpainted on the surface of a white plate adorned with floral arabesque.

The preview kicked off with spectators sitting on the ground seeking another perspective, and was concluded with an Euton Daley performance over a glass of wine. The lingering note of music only heralds the exhibition, which is officially open to the public from 21st January until 30th April – free of charge. Turn into Pembroke Street to savour Himid’s art, and prepare to be inspired by a world as much imaginative as realistic. After all, Lubaina Himid is so much more than a painter; she is, quoting her own words, “a political strategist who uses a visual language to encourage conversation, argument, change”.