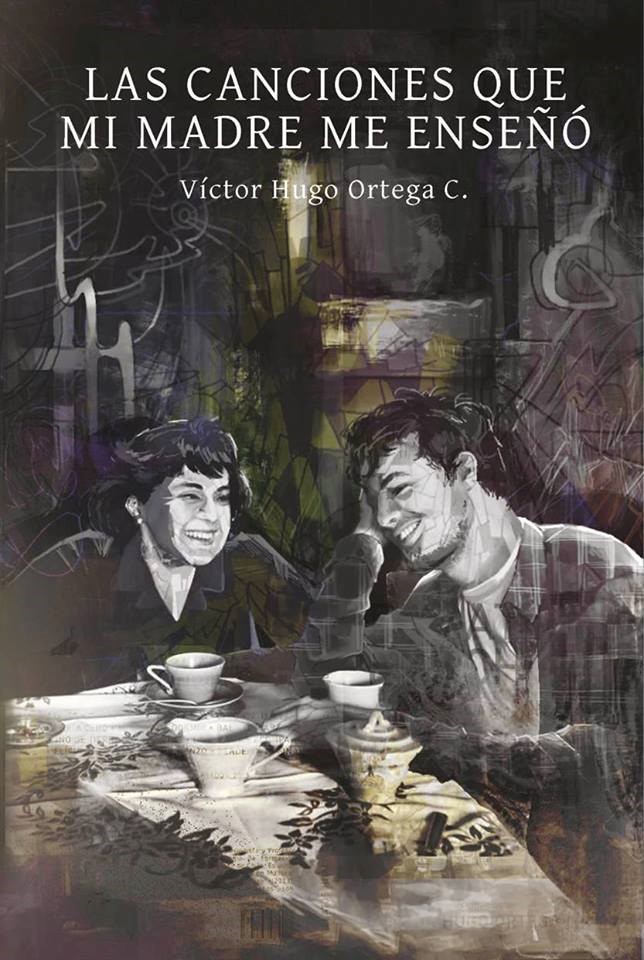 Las canciones que mi madre me enseñó or, in English, ‘songs my mother taught me’, is an honest and touching novel by Chilean writer Victor Hugo Ortega C.

The book is divided into short chapters, each of them offering the reader different insights into the life of the son and of the mother.  Whilst the language is uncomplicated and straightforward to read, this work is anything but simple in the themes it treats.  Rather than a chronological story, the reader is presented with snapshots in time, whether a particular event, conversation, song or singer that has left an impression on the narrator.  From the second chapter ‘Contar’ (‘tell’), the emphasis is placed on the importance of narration: oral and written.  The idea of narrating, of telling a story whether trivial or paramount, lies at the heart of the novel, and is also what constitutes its basis.  Quite often the narrator relates a conversation or scenario with his mother, bringing out the colloquial chilenismos (Chilean slang) and building the identities of both characters.  The absence of facts and descriptions about the characters encourage us to begin building our own image of them, one which will vary depending on interpretation.  The chapter ‘La emoción de una madre’ (‘a mother’s emotion’) recalls a Paul McCartney concert in Santiago, with the every-day hustle and bustle of making it through traffic, and arguing about what they will let you take in.  When the Beatles star takes to the stage and sings ‘And I Love Her’, the son sees the mother shedding a tear.  After the frenzied arrival, the emphasis on the song and the emotion of the mother slows the pace of narrative and we find ourselves relating to the mother through the well-known song.  Despite not knowing what exactly she is thinking, this concise and subtle show of emotion is enough to move us.

Las canciones que mi madre me enseñó is a novel that can be read by anyone, anywhere.  It is relatable, funny, touching and deeply personal without being cliché

In the epilogue, Christy Gallaway-Cale draws upon the different voices and songs you are invited to hear in the novel.  Not only do you hear the narrator, but also the songs which have played an important part in the life of the son, whether at a live concert or in the background at home.  This adds a new dimension to the text, one that reaches out to all readers, whether Chilean, Latin American or foreign.  The songs and voices of well-known artists intermingle with those of the mother and the son, mixing the public and the private spheres, and always keeping the reader close.

In the Chapter ‘Las canciones que mi madre me enseñó’, which gives its name to the novel, the narrator says of his mother’s songs, “Son más que canciones.  Son idas y venidas desde el mundo mío hasta el mundo ella, sabiendo que estábamos ahí, compartiendo, mirando, pensando” (“They are more than songs.  They are comings and goings from my world to her world, knowing that we were there, sharing, watching, thinking”). This is true in the sense that the reader does not have the impression of being left out in the cold; we are always brought into the action, the mind and imagination of the son.  The stories and events highlighted are important to the narrator, and in this way he brings us into his private life, telling us even some stories he does not tell his mother.  In ‘Morado’ (Purple), the narration shifts into the first person, with a fascination with a purple tree. “Le voy a sacar una foto al árbol y te la voy a enviar para que veas las cosas que hay en este pueblo.  No son muchas.  Pero son para compartir” (“I will take a photo of the tree and send it to you so you can see the things we have in this town.  We don’t have many.  But they are here to be shared”). We put ourselves in the position of the person being addressed, and in this way are privy to sharing the narrator’s stories and enjoying them.

Las canciones que mi madre me enseñó is a novel that can be read by anyone, anywhere.  It is relatable, funny, touching and deeply personal without being cliché. In a book which deals with the everyday and seen through the eyes of the narrator, we are presented with a sincere account and honest memories which, in their own way, teach us something too.