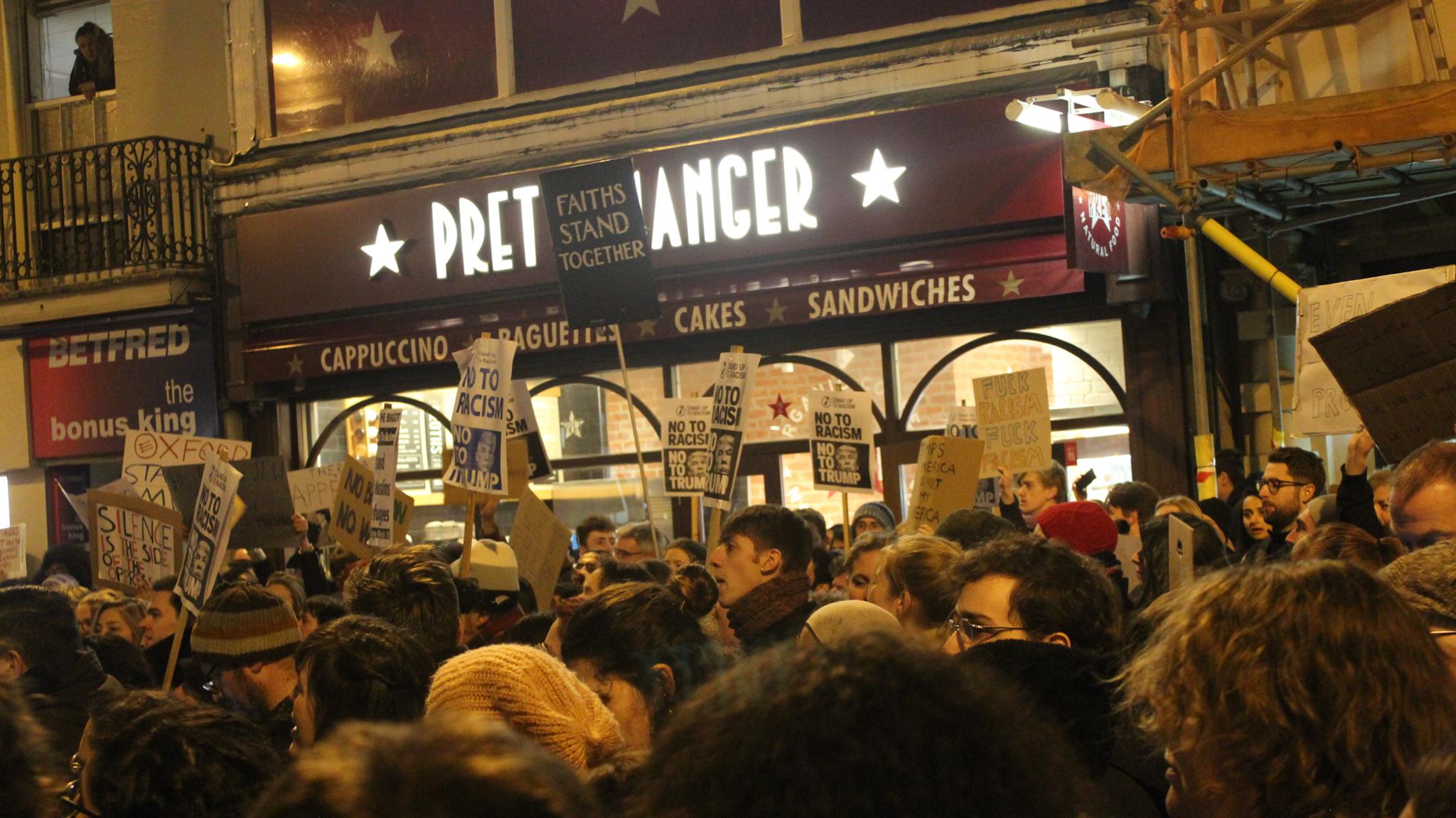 Students, residents and campaigners gathered in Cornmarket this evening to protest President Trump’s ban on Muslim immigrants entering the country.

This forms one of thousands of nationwide campaigns against Trump’s executive order – a response which Barack Obama’s spokesman said the ex-president was “heartened” by.

The protest was called by Stand Up To Racism, Oxford Momentum and Oxford University Islamic Society. Ian McKendrick from Oxford Stand Up to Racism, said:

“This ban has immediate life-wrecking consequences for people who have every legal right to be in the US but are now barred from returning to their jobs, homes and families. It also condemns refugees in genuine need of protection from persecution, and is an appalling attack on human rights.”

Trump’s executive order, signed last Friday, bans visa holders from seven Muslim-majority countries from entering the US for 90 days, and prevents all immigrants from entering the country for 120 days, suspending the United States’ entire refugee program.

The Justice Department’s top official, Attorney General Sally Yates, was fired by the Trump administration following her refusal to defend Trump’s order, along with fifteen other Attorney Generals who released a statement on Sunday 29th January labelling Trump’s orders “un-American and unlawful”.

These accusations have resulted in Washington’s Attorney State General, Bob Ferguson, announcing that he plans to sue Trump over his action. This represents the first state to take legal action against the Trump administration. Amazon and Expedia, two international Washington based companies, have publicly declared their support for the suit.

“We are a country based on the rule of law, and in a courtroom it is not the loudest voice that prevails, it’s the Constitution,” said Mr Ferguson. “At the end of the day, either you’re abiding by the Constitution or you are not. And in our view, the President is not adhering to the Constitution when it comes to this executive action.” Ann Donnelly, a federal judge in Brooklyn, has been praised for imposing an emergency stay on the implementation of the order.

Theresa May has also been criticised over her lack of action in relation to events. Signs at protests across the country have labelled her ‘Theresa the Appeaser’ and condemned the “special relationship” the prime minister wishes to maintain with America.

Her invitation to Trump for a state visit has also caused unrest: Obama’s first state visit to the UK took place over a year after his inauguration, while Trump’s invitation was sent and accepted within two weeks.

Over 1.5 million UK citizens have signed the petition ‘Prevent Donald Trump from making a State Visit to the United Kingdom’, which argues that while Trump should be permitted entry to the UK in his capacity as head of the US government, an official state visit would represent compliance with and acceptance of Trump’s policies.

Former Foreign Office Chief Lord Ricketts condemned May’s invitation as “premature” and expressed the belief that such a visit would place the queen in “a difficult position.” Aides at Buckingham palace have publicly established that the queen is acting on the advice of the prime minister in complying with the visit. Though Foreign Secretary Boris Johnson has stated that the UK government regards the ban as “divisive, discriminatory and wrong”, May preaches the importance of the UK maintaining a positive relationship with the Trump’s America.

With more and more international groups speaking out against the ban, including the African Union, which condemned America for “taking our people as slaves” but not accepting refugees, it appears increasingly unlikely that the ban will remain in place for the full 90 day period.

A second protest will be held on Wednesday evening at the Carfax Tower.