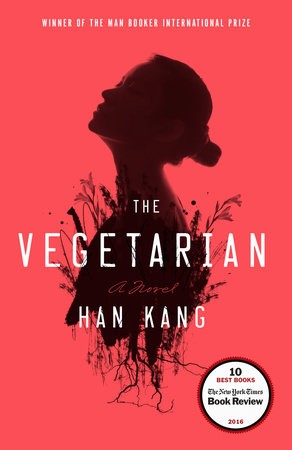 The Vegetarian by Han Kang, recently published in English translation by Deborah Smith, is an intriguing novella: part cultural survey of modern South Korea, and part investigation of the human agent and its inherent connection to nature. The narrative explores the relationship between Mr Cheong and his wife, Yeong-hye, which becomes more disparate than ever when the latter suddenly elects to rid the house of all meat and become a vegetarian, after having a vivid dream which is slowly revealed to the reader. This dream is just the first of a series of incidents which lead Yeong-hye to disconnect with her family, from whom she becomes gradually isolated due to their disapproval with her increasingly extreme lifestyle choices. The origins of Yeong-hye’s conversion to vegetarianism and the repercussions it has upon herself and those around her remain the central focus across the novel’s three parts. The sections, entitled The Vegetarian, Mongolian Mark, and Flaming Trees, are narrated by the protagonist’s husband, her brother-in-law, and her sister respectively, and each offers a unique dialogue pertaining to Yeong-hye’s actions. Indeed, while this is a novel ostensibly about the vegetarianism of the protagonist, its range extends far further into the lives of her narrating family members, offering musings on their own personal crises and conflicts. What Kang has produced here is a novel that envisions familial conflict within the broader question of human identity, questioning the proximity of mankind to our environment, and the significance of the human body as an object of art.

[The novel] envisions familial conflict within the broader question of human identity, questioning the proximity of mankind to our environment, and the significance of the human body as an object of art

Most significantly, The Vegetarian emerges as a novella of ideas, its wild and beautiful concepts being central to its appeal, and leading it to appear more as work of art than work of fiction. In particular, the mid-section of the novel, Mongolian Mark, is a startlingly beautiful, although also unsettling, exploration of the sensuality of the human form. It takes as its focal point Yeong-hye’s brother-in-law painting with flowers her naked body, in an elaborate representation of her increasing closeness to the natural world. By placing such exquisite and moving images of the human body at the centre of the work, much about Yeong-hye is inferred from the vivid images Kang evokes, instead of emerging more typically through the narrative revelations of other characters. What proves slightly problematic, however, is the ways in which these ingenious concepts and images are played out on the page, with the fixation upon few key concepts occasionally seeming to come at the expense of sophisticated narrative structure. To Kang’s merit, this issue is largely overcome through the tripartite structure, which creates the effect of a series of vignettes, a form generally better suited to the extended elucidation of a central creative idea, removing the need for pace and plot progression. With the suitability of the vignette form in mind, it is of great interest that in recent editions of The Vegetarian the main text has also been accompanied by The Fruit of My Woman, Kang’s short-story precursor to the novel, which considers very similar ideas across only thirty pages. The result is less-impressive than the novella itself, mainly because of the far greater reliance upon the supernatural, and the restrictive brevity of the form, but nevertheless the tale is significant in offering a vision of what The Vegetarian might otherwise have been.

However, for all that The Fruit of My Woman offers a supernatural alternative to the main novella – as Deborah Smith explicitly notes in the introduction to her translation – a palpable otherworldliness is felt across both texts. In spite of the realism of The Vegetarian in terms of plot, it retains the inherent mysticism of its short-story counterpart. There is something about the artistry of the plot, the civility of even the most sensual imagery, that imbues the work with a poetic quality that hints at the fantastical. Kang’s examination of the naked human form and its intimacy with the natural environment is also awarded a magical execution, explored through such curious and unusual images that it truly challenges the limits of the imagination. No doubt the cultural exchange of translation also contributes to the fantasy-feel of this novella in English, offering an unfamiliar, if realistic, setting which spatially distances the Western reader, defying their expectations of realism to offer a new unfamiliar reality.

A conceptual work of art, based around a single compelling idea, The Vegetarian is as beguiling and enticing as it is perplexing and unexpected. Presented with a creative concept overflowing the confines of its novella form, readers will undoubtedly long, as I did, for this intriguing vision of humanity to continue a little longer, yearning for yet more exquisite detail in the artwork Kang weaves.