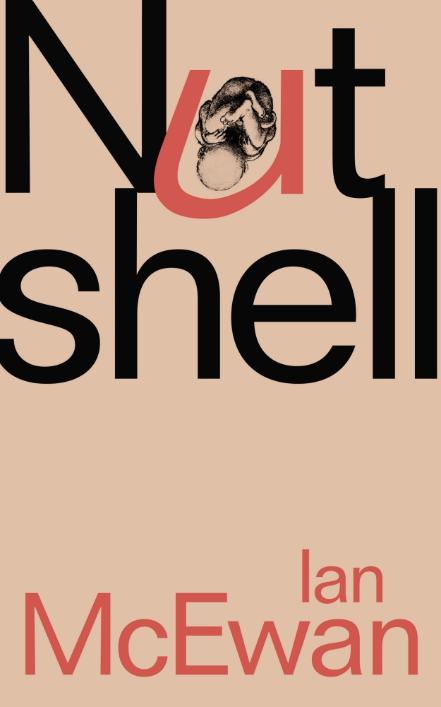 “I’m hearing pillow talk of deadly intent and I’m terrified by what awaits me, by what might draw me in.” So begins Ian McEwan’s most recent novel, Nutshell, a work which both fascinates and disturbs through its unique perspective on a malicious death. Despite first-impressions, the voice McEwan creates is not that of a lover, or of an inquisitive eavesdropper, but of an embryo lying in the womb of a woman soon to become a murderer. With this in mind, the narrator is quick to qualify his initial appearance of omniscience, conscientiously detailing the manner of each of his early inferences and deductions, and reassuring his wondering readers of the legitimacy of his narrative. The 200 pages that follow reveal, with an exquisite, real-time slowness, the scheming and emotions in the build-up to, and aftermath of, the murder of the baby’s father.

the novel manages to challenge all preconceptions of the crime genre, upending the whodunit into an extraordinary will-they-do-it

Perhaps naturally, it is the narrator who stands out most in this novel, even beyond the reach of his dialogue, immediately appealing to the creative imagination and the sympathetic heart. Right down to the almost-scientific beauty in the opening description of this unborn child, a palpably visual exploration of what constitutes personhood, the reader is constantly drawn into the narrator’s alien life and world. While the narrative voice begins a tad unsteadily, given the odd sophistication of the dialogue for an infant, it becomes clear that what McEwan is so pleasingly presenting his readers with is, remarkably, a hitherto-unheard voice of naïve complexity. Readers are encouraged to set aside their reservations and preconceptions with ease, as the narrative quickly becomes more assured within the first few chapters. Once this barrier of understanding and acceptance of this less-than-typical narrator are overcome, the joy is really felt, curiosity is piqued, and the real action of the novel is finally allowed to take the forefront of the reader’s mind. Nevertheless, McEwan’s language never allows the reader to fully forget the presence of the extraordinary narrator; his strange voice is the very language of poetry, but applied to the novel. Every sentence is a joy to behold, a gift to the reader of delicately considered prose, and thoughtful observations, all coming from this most unexpected of narrative voices. What readers are ultimately delivered is a voice wise, yet innocent, and matchless for its never-before-heard narrative viewpoint. On the page this manifests itself best in the tantalising minutiae focussed upon in phrases like the “cliché-bloated tongue”, demonstrating the obscure attention to detail that is, necessarily, our blind, and deeply intuitive, narrator’s forte.

While much of this novel’s success lies in McEwan’s obvious choice to base his narrative around a deliberately provocative idea –ostensibly, Hamlet as a fetus- it is worth noting that the merit of Nutshell rests not only with this single clever idea, but with its sublime execution. Alongside its edgy and entertaining narration, and perhaps in part because of it, the novel manages to challenge all preconceptions of the crime genre, upending the whodunit into an extraordinary will-they-do-it. By filtering the build-up to the murder through a bizarre perspective, one simultaneously vastly limited but sharply perceptive, criminal understanding reaches the reader through unexpected channels. While readers may usually discover obvious physical clues alongside their fictional detective, here there are no visual clues, only sounds and movements carefully interpreted by our fetal narrator. This also affords McEwan the opportunity to capture perfectly the frustration of the narrating protagonist, constrained in his organic prison, unable to act to prevent the murder. Indeed, the nature of the narrator takes on a new quality when it is learned that the murder he is presiding over, inextricably linked to through his murderous mother, is that of his own biological father. Powerful emotions of frustration and regret dominate the latter stages of the novel, and lift the unusual narration from a simple curiosity, to a uniquely profound exploration of the dynamics of familial relationships.

By nature, Nutshell is a novel which perplexes, entertains, and moves the reader in equal turn, all with McEwan’s startling attention to detail, and luxuriant prose style. Read it for its peculiar narrator, read it for the rapidly-changing and intense emotions, or read it just for the thrill of chase as the killing comes to fruition; whatever intrigues you about this novel, just make sure that you do read it – and feel the thrill for yourself.