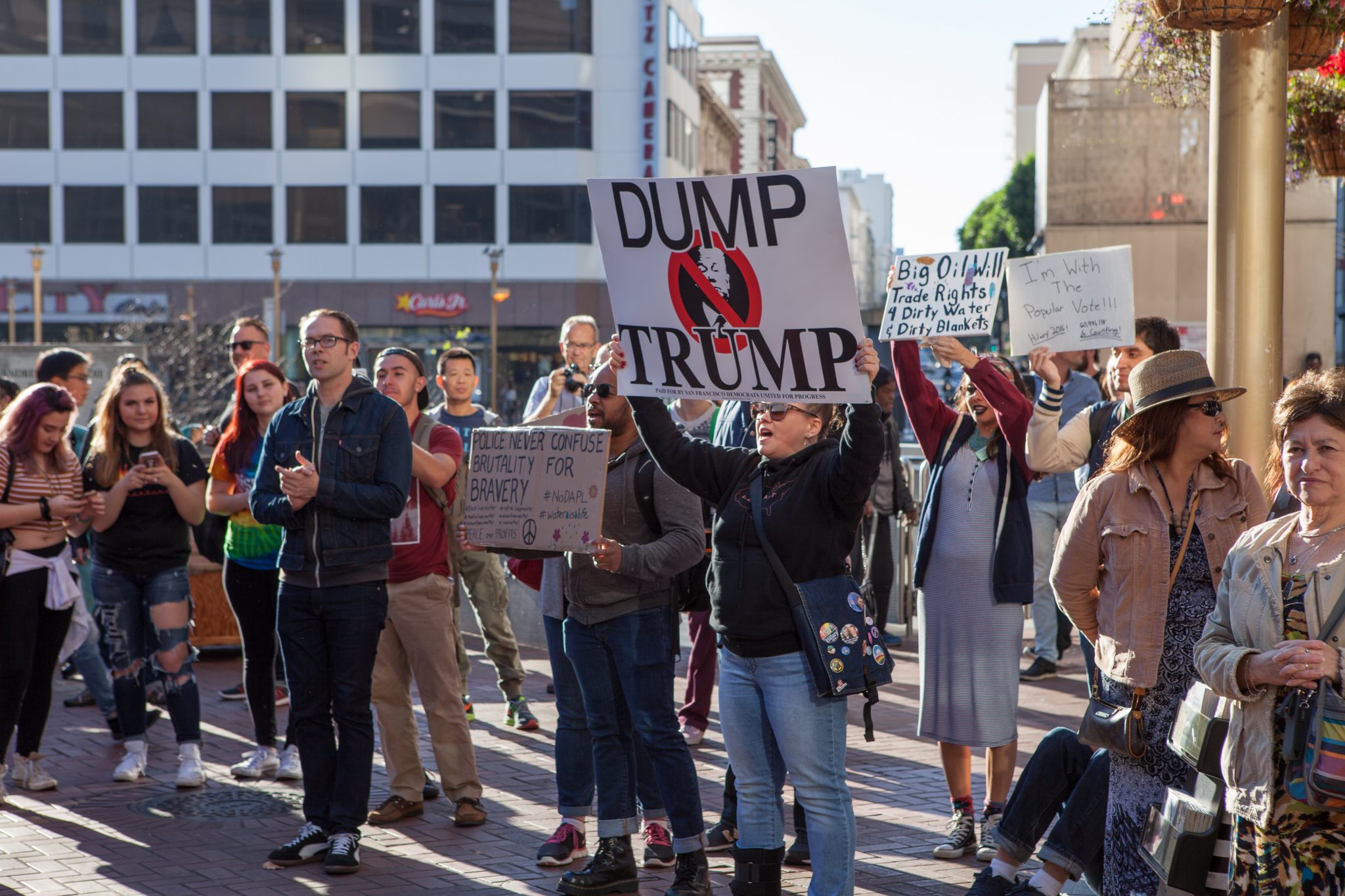 ‘I give you power, I can take it away’: pop’s protest against Trump

How has the music world reacted to President Donald Trump? ‘Bigly’, you might say.

Music has always been revolutionary. Even at the best of times, it finds something to grumble about. But Donald Trump, in all his spray-tanned, finger-waving glory, has stirred up its fiercest protest in years. Some are even hailing a new punk era on the horizon (“God save The Donald”, anyone?).

The President began his career as popular Muse during his tumultuous presidential campaign, inspiring the likes of Ledinsky’s charming acoustic guitar ballad ‘DonaldTrumpMakesMeWannaSmokeCrack’, and Wesley Stace’s ‘Mr Tangerine Man’ (a re-imagining of Bob Dylan’s classic ‘Mr Tambourine Man’). In the post-inauguration lull, Trump continues to leave his mark on the music scene. Here is a selection of January’s best presidential jams:

‘Tiny Hands’, Fiona Apple – Subtitled as a Women’s March Chant, the song clocks in at only one minute long, but still packs a punch. Sampling Trump’s notorious ‘Grab ‘em by the pussy’ comment, it deftly responds: ‘We don’t want your tiny hands / anywhere near our underpants’. Left on a defiant loop, it makes its point simply and effectively. Brutal honesty was perhaps to be expected from Fiona Apple, since her last release was the festive Christmas tune ‘Trump’s Nuts Roasting on an Open Fire’.

‘Hallelujah Money’, Gorillaz feat. Benjamin Clementine – It’s Gorillaz’ first new music since 2012’s ‘DoYaThing’, and perhaps an omen of what to expect from the virtual apes in 2017, who have confirmed plans to release a full-length album later this year. Dropped on the eve of the inauguration, it deliberates in a quasi-timeless way on the value of power and money, with a distinctly biblical flavour. Donald Trump’s much-criticised plan to build a Wall between the USA and Mexico is alluded to in the lyric ‘Building walls / walls like unicorns’, which gives a sense of the faux-sincerity many have perceived in the new President. The accompanying video is equal-parts mesmerising and downright creepy: Benjamin Clementine’s face is encircled in shadow, making unwavering eye-contact with the camera as he sings.

‘I Give You Power’, Arcade Fire feat. Mavis Staples – Arcade Fire chose the night before the inauguration to strike a welcome note of solidarity and empowerment. Heart-warming call-and-response vocals resound to a hip-hop drum beat: ‘I give you power, over me / I give you power, but now I gotta be free’, which then reaches a pitch of democratic fervour with the reminder ‘I give you power, I can take it away’. A tweet accompanied the release, saying ‘It’s never been more important that we stick together & take care of each other’. Messages of hope have been left trailing in the dust lately, and ‘I Give You Power’ reminds us how essential they are. 2013’s Reflektor was the last we had heard from Arcade Fire, and rumour has it they’re set to release a follow-up later this year.

Our First 100 Days – Not a song, but an ambitious new subscription service which is releasing one brand new song each day for the first hundred days of Donald Trump’s presidency. Following her critically-acclaimed 2016 album My Woman, Angel Olsen’s dreamy shoe-gaze track “Fly on Your Wall” kicked off the series, and contributors to come include Toro Y Moi, How To Dress Well, Wild Nothing, and Mountain Goats. The $30 price-tag will go towards charitable causes devalued by Trump’s campaign: Reproductive rights, LGBTQ+, climate change, and immigration in the USA.