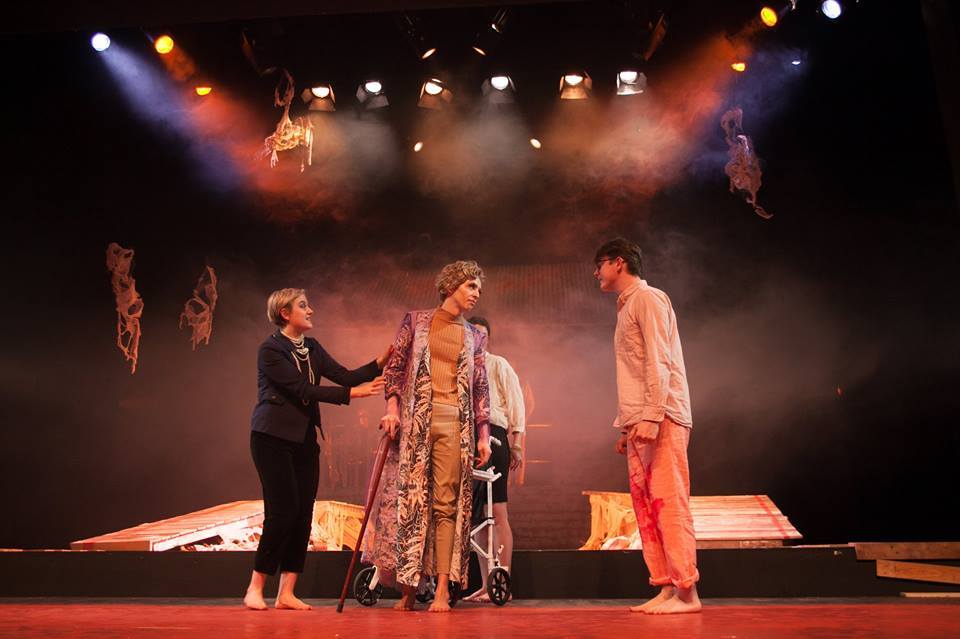 “Cut this hideous story out of her brain!”

So crowns a climactic scene in Tennessee Williams’ Suddenly Last Summer, performed this week by the Experimental Theatre Company at the Oxford Playhouse. The theme of cutting (in fact, of lobotomisation) runs throughout the short, intense drama – not least because the one-act play is split to create an interval. Similarly cut is the playing space of the stage, with a thick sheet of gauze dividing the set from the action on the forestage until close to the end of the show. These divisions echo the divisions discussed in the rest of the play: between past and present, light and darkness, appearance and reality. To the audience, though, they felt clunky, rather than challenging.

Perhaps this stilted feeling is only because the play’s quieter moments suffered in comparison to periods of visually engaging drama and suspense. The first half, played out in a quiet manner by three characters in a very empty playing space, risks losing the audience’s interest, and it was frustrating to see the rest of the stage – what director Sammy Glover had called “the dead space” – going largely unused. The second half was where the show came into its own. It was a spectacle of conflict, action, and emotion, with characters finally interacting with Harriet Bourhill’s set, and Stephen Green’s lighting used to its full potential. The tension between characters had my hesitations about the first half silenced and the rest of the audience palpably hooked. It was at this point that the show succeeded in being genuinely captivating – a rarity on the Oxford scene. As with the contrast between the two halves, lengthy scenes of exposition and dialogue could sag next to highly sensory and expressive movement scenes, skilfully choreographed by Rebecca Hamilton and scored with disturbing, yet electrifying, music by Ed Maclean and Georgia Bruce.

The second half was where the show came into its own.

A dark and emotionally taxing script is treated with humanity by a strong cast. Mary Higgins was mesmerising as Catharine, a woman who has been brutally institutionalised and treated as a pawn by other characters. Sometimes playful and flirtatious, others desperate and raging, she humanised Catharine in a thought-provoking and empathetic performance. Derek Mitchell as Violet Venable was another scene-stealer, expertly moving between quiet senility and passionate rage. Supporting cast members were talented: Ell Potter’s performance as Catharine’s image-conscious mother was subtly powerful, and Georgia Pearce’s Miss Foxhill proved popular with the audience. Cassian Bilton’s Doctor was somewhat cryptic. The choice to portray him as muted and naturalistic meant he was at times overshadowed by the more outlandish characters, making it difficult to engage with him. The whole cast could also have benefited from more accent work – at times the clarity of the dialogue suffered because of this.

Visually, the staging was powerful. From the torn masses of white fabric suspended from the ceiling, evoking Sebastian’s murder or clinical bandages, to the skilful makeup by Shivaike Shah, the company’s attention to detail could not be faulted. The medical costumes, especially, were excellent, playing with ideas of binding and structuring yet remaining timeless. Once again, however, the abstract stylistic elements jarred with Williams’ text. Suddenly has wealthy characters obsessed with manners and appearances who treat Europe as a summer playground: putting these characters in the setting of a derelict house felt uncomfortable (although perhaps this was Glover’s intention). That said, the set used the space to great effect, with a stimulating variety of levels, textures, and angles to be utilised by the cast and lights.

On the whole, the ETC plays to its strengths with Suddenly. The focus on movement, innovative design, and dramatic tension were excellent, and the show was slick from start to finish. The experimental aspects of the staging detract from Williams’ text, but are nonetheless engaging and challenging. Despite its pacing issues, Suddenly Last Summer was disturbing, beautiful, and powerful, and I would heartily recommend seeing it.

Suddenly Last Summer is on in the Oxford Playhouse until the 11th of February.

The Man of Mode: a mean level of entertainment