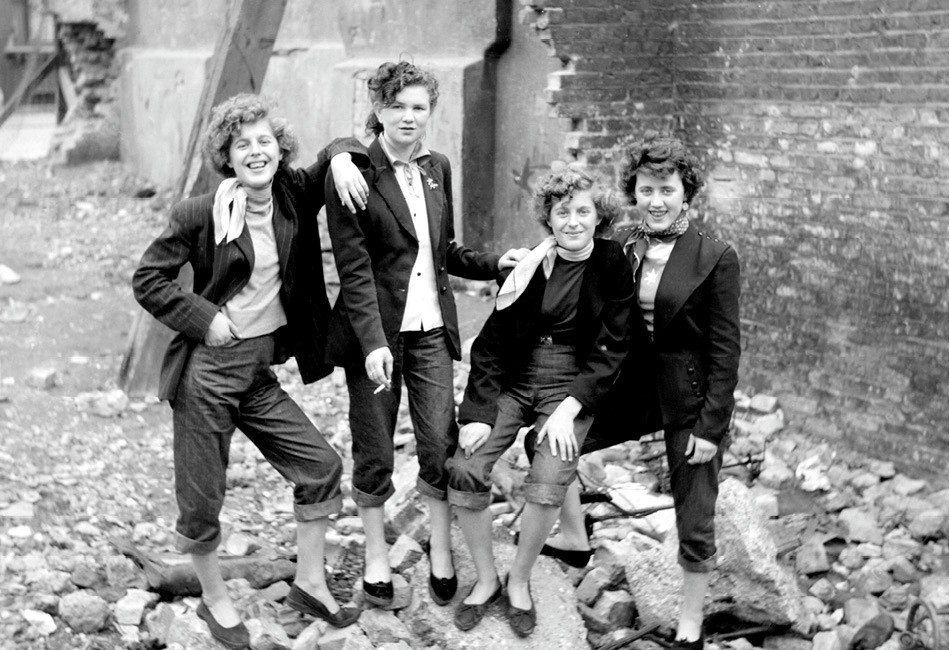 “What’s wrong with teddy girls?” asks the headline of the 1955 article which opens this exhibition, and indeed, one might well ask. In the brightly lit and minimalist foyer to The North Wall Arts Centre, viewers are met with dozens of character studies of Teddy Girls (and their better-known male counterparts), frozen by Ken Russell in black and white. Charting the emergence of the Teddy, and their signature New Edwardian attire, these photographs capture the teenagers around dilapidated post-war London, always contrasting the unusual sophistication of their style with the deprived environments that bred them.

Russell’s subjects are always interacting with their surroundings, some more overtly than others, using their Teddy identities to produce what one contemporary journalist called “a bit of solemn frivolity” out of uninspiring post-war Britain

It is precisely this mood of social revolution and instability that is being reproduced in Summertown this month, in a brief exhibition exploring the Teddy phenomenon. The walls of the intimate, and oddly informal, setting lead one first to the less-familiar figure of the Teddy Girl, through familial urban images in which candid subjects invite viewers into their lives; sharing cigarettes on stairwells and smiling at points beyond the camera, these young women represent so clearly the identity crisis of the teenager, caught half-way between youth and adulthood. Certainly, it is easy to forgot that Russell’s subjects are young teens, pictured as they are sporting cravats and waistcoats, alone on the streets, smoking cigarettes. This juxtaposition is captured exquisitely in Freewheelin‘, a piece which portrays two young teenage girls clad in blazers and tailored slacks, standing beside a bicycle leant against the railings of the Seven Feathers Club. Here, the childish frivolity with which they hang from the railings, and pose for the camera, betrays the sophistication of their dress. It is this personal intimacy which permeates the entire exhibition, evident in even the more staged pieces which emerge further into the gallery. Character and individuality is at the heart of Russell’s pieces and even through the homogeneity of the Teddy identity, it is strength of individual character that consistently prevails. Indeed, one of the most arresting images depicts Jean Rayner, a 14-year-old with “attitude by the truckload”, staring defiantly down Russell’s lens, cigarette in hand, framed by a group of Teddy Boys clamouring to get into the frame. A similar sense of theatrical show emerges in Allow Me, a photograph which illustrates Josie Buchan at the stage door of the Walthamstow Palace Theatre, beside three Teddy Boys, one offering her a light. While their elaborate costumes are clearly designed for show, this ostentation is also reflected in the behaviour of many of the subjects, who embody a self-assuredness and composure even in candid shots.

However, this series also takes as its impetus the question of how these vibrant characters interact with, and respond to, the environments which produced them. Portraits abound of teens dressed unusually for the urban streets they inhabit, of elegant figures dominating the foreground, in stark juxtaposition to the derelict locations that feature behind them. In perhaps the most drastic contrast of outfit and environment, Grace IV depicts a young woman in elaborate dress, replete with brooch and hat, standing with flawless poise in the frame of a derelict East London doorway. Through this approach, many of the portraits combine edginess with elegance, to evoke a sense of characters moving beyond their environment. However, the captions drag such hopefulness back down to earth, reminding the viewer of the realities that lay behind Russell’s colourful subjects. One Rosie Hendon went to work at McVities the year after her portrait was taken, others were shop assistants and students, betraying an ordinariness more befitting of their environment than their attire. Other photographs show subjects engaging more closely with their settings, with Barbara Wood II showing the young Barbara gesturing with her umbrella to a council election poster in Poplar, East London. In this way, Russell’s subjects are always interacting with their surroundings, some more overtly than others, using their Teddy identities to produce what one contemporary journalist called “a bit of solemn frivolity” out of uninspiring post-war Britain. Such conflicts are at work across all of the photographs in this exhibition, which relentlessly juxtapose age and dress, character and setting, style and environment, to provide a more-than-fitting documentation of what was surely the classiest teenage rebellion, as well as the first.