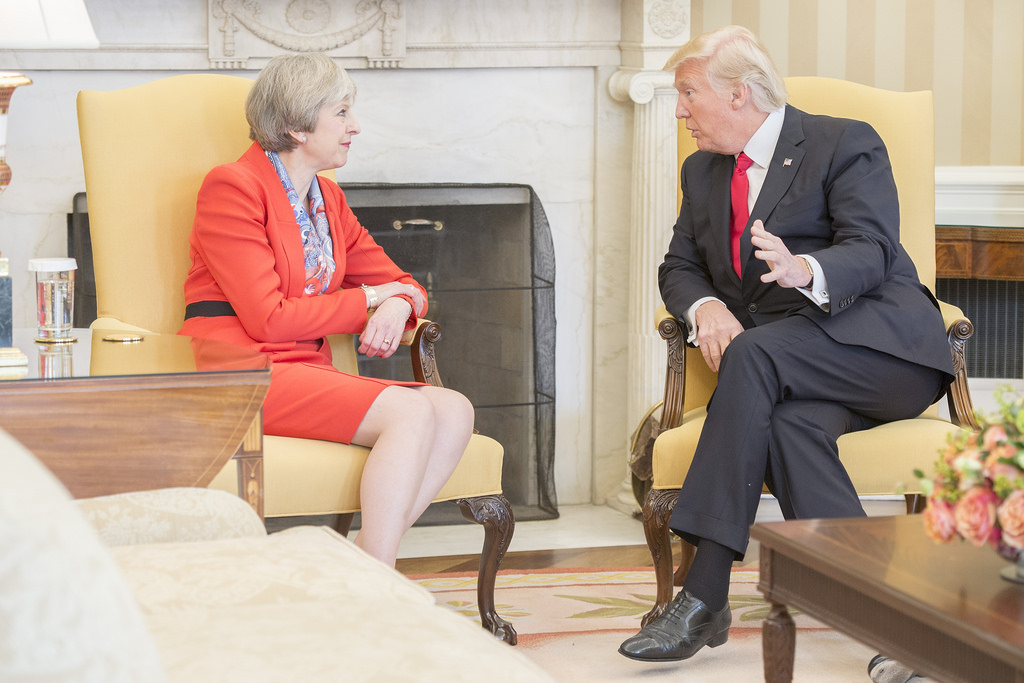 “Theresa Appeaser- Not My Prime Minister”

This pleasingly precise rhyme was just one of the placards waved at Stand Up To Racism’s protest of Donald Trump’s executive travel ban on Monday evening, thought to have been attended by over 2,500 people. It was obvious that some had come directly from work, looking slightly dishevelled and tired. And that is how I felt watching the coverage of Theresa May’s first official meeting with President Trump – tired. In her speeches to the Congressional Institute and White House press conference, May assured her audiences that to be the first national leader to meet Trump was an honour indeed. Judging by protests in parliament, the media, commons petitions, and on the streets, those whom she claims to represent might beg to differ.

May’s speech was drenched in historicism, looking backwards to a selectively glorious history of the United States and United Kingdom in progressive partnership against societies which are “closed, coercive and cruel”.

Unfortunately, it appears that the public are limited to just that – begging to differ from our most senior representative. By utterly failing to take a significant stand on behalf of the British people, against Trump’s rhetorics of misogyny, sexism, racism, and Islamophobia to name a few, May can make no claim to represent those in Britain who are meaningfully affected by them. Neither has she represented the respectful and progressive values that Britain aspires to. May’s speech was drenched in historicism, looking backwards to a selectively glorious history of the United States and United Kingdom in progressive partnership against societies which are “closed, coercive and cruel”. After the executive travel ban, the irony of this can’t have been lost on the Prime Minister. In light of this uncomfortable sycophancy, many commentators have suggested that our ‘special relationship’ is headed for poodledom. Regardless of personal political affiliation or challenging political conditions in the wake of Brexit, it is clear that Theresa May cannot claim to have fully represented the British people in her meeting with Trump.

To be totally silent on Trump’s treatment of women amounted to normalisation and consent. No matter how they felt about it, women and men will have immediately recognised Trump’s condescending pat of May’s hand, because it is an example of the reality of everyday sexism. These less obvious, ‘minor’ instances of sexism persist when they are endorsed by silence. However, May’s failure to set herself apart from Trump’s views in any substantial manner takes a far more dangerous step of tacitly consenting to the entirety of his bile towards women. The Women’s Marches stand as testaments to the concern people feel for the security of women’s rights after Trump’s election and reinstation of the ‘global gag rule’, and this concern must be represented by correspondingly strong statements of intent to protect from our government and Prime Minister, regardless of their gender. Not only was this absent, but May’s cosiness as the first national leader to meet with Trump is a retrograde step.

To be totally silent on Trump’s treatment of women amounted to normalisation and consent.

May has also failed to represent British citizens who are discriminated against by Trump’s racism and Islamophobia, and our supposed ‘British values’ of tolerance and respect. Trump’s executive order has barred citizens of seven Muslim majority countries from entering the U.S., suspended refugee programmes and prioritised claims for refuge on the basis of religious persecution, creating an atmosphere of exclusion and prejudicial treatment. That a member of her own government, Nadhim Zahawi, Member of Parliament for Stratford-upon-Avon, was initially barred from visiting the U.S. is at best a surreal state of affairs. Again, May’s caution that U.S. policies are the U.S.’s business amounts to consent, rejecting the opportunity to speak out and represent the views of the British people in support of tolerance, respect, global diplomatic stability, and security. Not only is the idea that Britain should not be a critical voice when international diplomatic policy goes wrong embarrassing, it simply does not represent the views of many British people.

Much of this bizarre diplomacy is the product of the damage done to Britain’s political and economic relationships by Brexit. Having cut ties with Europe, the perceived practical needs to bolster the ‘special relationship’ and negotiate speedy trade deals with Trump’s administration has first taken precedence over critical politics, and now simple representation. Even in more usual political circumstances, it would certainly have been difficult for May to wrench her hand away from Trump in disgust, or to voice criticism at all. Given the seemingly impossible political conditions May is forced to juggle, in addition to a desire to prevent Nigel Farage from becoming the vehicle between Trump and Britain, it may appear that we should do as Theresa does; grit our teeth and bear it. However, economic and political advantage will mean little in the long run if our Prime Minister is willing to sacrifice principles of equality and tolerance to get it. Regardless of ethics and principles, the fundamental failure in representation remains, whereby the government’s perception of the paramount needs of the British people has been prioritised over those expressed in continuing protests in our major cities, and the Common’s petition to rescind Trump’s invitation for a state visit. If the accepted behaviour of diplomacy amounts to poor representation of the popular voice, these protests have demonstrated that the public neither needs nor wants it in its current form. The opportunity to get this right from the outset has been firmly lost. However, Theresa May will have many opportunities to better represent her electorate in the relationship to come, in which the concerns of the British public should lead her own.