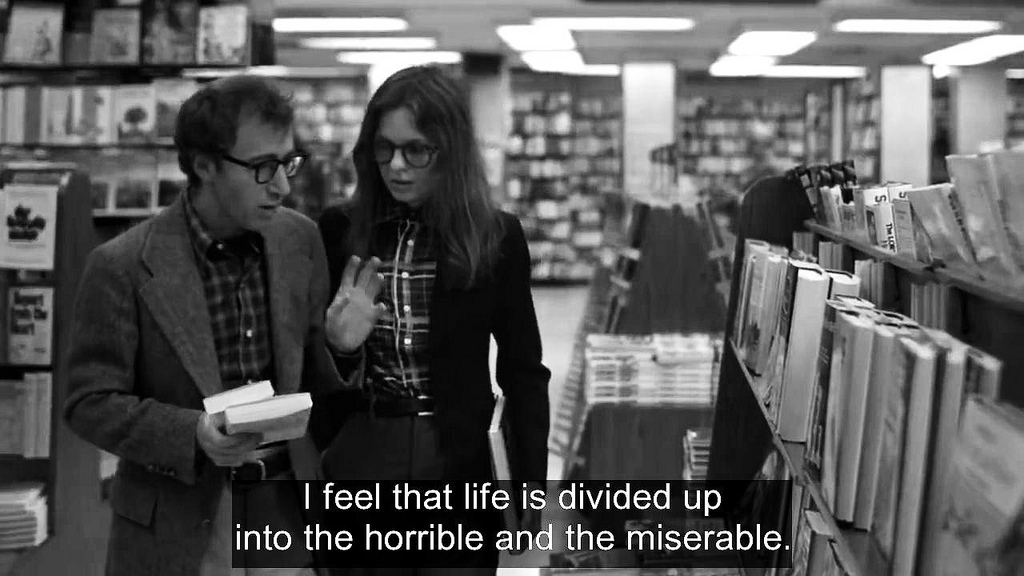 I always find it’s good (for my ego at least) to begin an article with a grand, overarching and probably oversimplified pronouncement, so I’ll start with this: Annie Hall is the best romantic comedy ever made. More than that, it’s probably one of the best comedies full stop ever made, being one of the few to have ever won the Best Picture Oscar and marking the pinnacle of Woody Allen’s filmography in many’s eyes. The script is perfect, the acting’s perfect, the way it plays with the fourth wall and Allen’s relationship with the viewer is perfect – It’s pretty perfect is what I’m saying.

But it’s a romantic comedy that’s not a Romantic Comedy, if that makes any sense. Whilst most rom-coms are about falling in love, Annie Hall is more about falling out of love. Allen doesn’t fixate on Alvy (Allen) and Annie (a career-best Diane Keaton) falling for each other, with the non-chronological nature of the film’s structure having us first see them together a good deal into their relationship struggling with sexual issues and Alvy’s intellectual neuroses. Although we do see Alvy and Annie fall for each other to an extent later on, Allen’s interest isn’t in the meet-cute you might see in other rom-coms, but about character and subtext. This is famously and hilariously portrayed by the ‘mental subtitles’ of their inner thoughts as they stumble nervously through conversation with each other, as Allen hints at the anxieties and flaws that will draw them to each other and eventually drive them apart.

Alvy’s monologue to the audience at the very beginning of the film tells us that this relationship is doomed to eventually fail, which lends the entire film a sense of wistful melancholy you just don’t see elsewhere. When we see arguments and troubles throughout the film, we get a sense of mounting pressure and a fracturing relationship in an almost tragic sense, as we know the film is doomed to end with Annie and Alvy out of love. Even their happy moments, their banter and playfulness is tinged with this inevitable sadness because we know what’s to come.

I worry I might be making one of the funniest films ever made sound like a depressing ride here, which it really isn’t. On top of the fantastic jokes, quirky performances and fourth wall breaks there is a genuine sweetness to the film if you go past the defensive humour and neuroses inherent to Allen’s work. Although Alvy and Annie may break up, the film ends on a positive note as they meet one last time and reconcile as friends, and Alvy’s ending monologue is wistful but positive. He concedes that although love might be “totally irrational and crazy and absurd… I guess we gotta keep goin’ through”.

Annie Hall may not follow the standard rhythms of a rom-com but in its own way it has more to say about love and relationships than a thousand sub-par Hugh Grant vehicles, recognising the hardships and sadness that can come of it, but also its vitality and the joy it can bring. So if you’re looking for something funny, a little sad but that can also reaffirm your belief in romance and love, look no further than Annie Hall.

A new way of reading