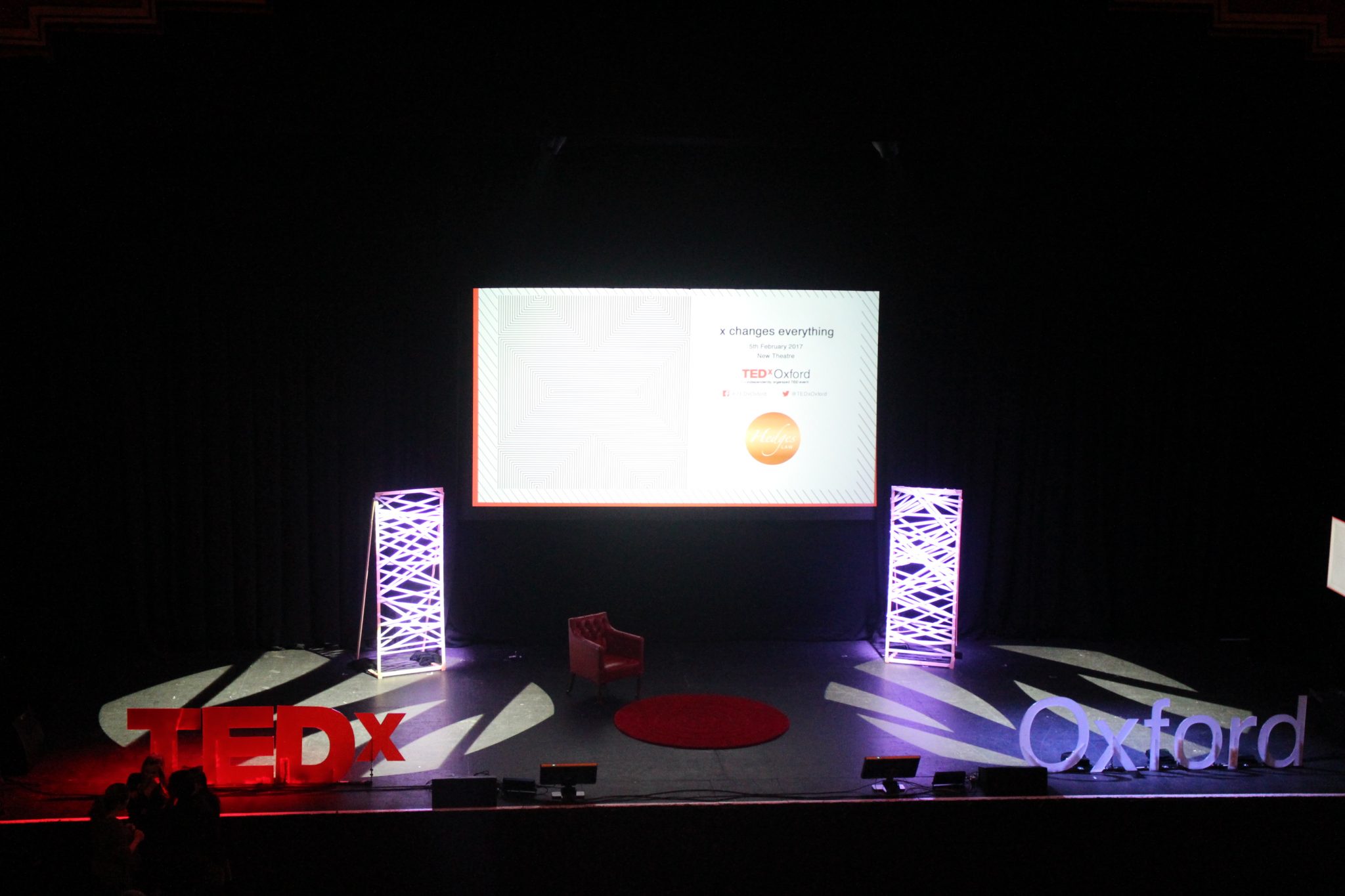 What ‘X’ Changes Everything? Highlights From TEDxOxford

TEDxOxford has grown quickly over the years: what started as a hundred people in the Keble O’Reilly in 2011 has grown to 1800 this year, and has now graduated to the New Theatre. Chris Williams, the day’s MC, highlighted this achievement in the welcome talk we received at the start of the day, alongside encouraging us audience members to take a minute to discuss the speakers with our neighbours between sets.

All this is in line with the ethos of TED and TEDx (its local, freely-licensed franchises). The TED motto, ‘Ideas worth sharing’, implies a communicative aspect with and between its audience. TEDxOxford’s own credo, ‘X changes everything’, was glossed on its website as being a chance for the day’s speakers to receive ‘a platform to expose and share their thoughts on pivotal moments, events, and shifts that have culminated or will potentially culminate at fundamental progress in the world.’ The remit is deliberately broad, and brought a strong variety of responses to the stage this year.

The morning’s first talk came from Mannat Malhi, a second-year Law student at Wadham College. Focussing on how she relates to her identity as a Sikh, she used her hair (which, as a sign of their faith, Sikhs leave uncut) as an exemplar both of what her religion has taught her, and the positive and negative experiences she has had growing up as a person of colour. To borrow her words, ‘Identity confers power, access, credibility’, which she elaborated on in a powerful manner, drawing particular attention to a childhood incident at a summer camp. While on a group walk, a girl behind her had tugged on her hair, and, in disgust, called her a ‘freak’. Nevertheless, Malhi resolved to keep what she has grown up with, and remains proud today.

After a presentation on getting people involved in global volunteering causes from Nikki Eberdhardt, Jo Boaler gave a wide-ranging talk on recent changes in maths education. These have been driven in response to developments in our understanding of the neuroscience behind how people learn the subject. She had a deep commitment to there being no such thing as a “maths brain”, and outlined how with a more collaborative learning environment, and more emphasis on visual learning, could help people who nominally can’t do maths to enjoy and succeed in the subject.

The TED motto, ‘Ideas worth sharing’, implies a communicative aspect with and between its audience.

Another highlight was the talk from computer scientist Dave Troy, the computer scientist behind 410 Labs, giving a talk following a range of advances in data collection and analysis which have fed into the new rise of right-wing populism. Among other things, he drew attention to the firm Cambridge Analytica, which has applied this new wave of information technology to elections on both sides of the Atlantic, and has alt-right strongman Steve Bannon as a board member.

An example he gave of how this electoral research takes effect was Facebook ‘Dark Posts’. These audience-tailored advertisements,among other things, are an intimate, invisible way for political-minded organisations to serve you a world of content you just so happen to agree with, and which might just push you into voting for someone like Donald Trump. Never mind that “Islamic Fundamentalist Terrorism” isn’t ravaging your streets: there it is, right on your timeline.  Subsequently, I handed over to Tom to cover the afternoon.

Departing from some of the technology-heavy discussions of the morning, TEDxOxford turned to cultural ‘X’s, and, like Boaler’s talk, to education. I was treated to an eye-opening talk by Catherine Mallyon, Executive Director of the Royal Shakespeare Company, on the role which the arts can play in a child’s development. Did you know that kids from disadvantaged backgrounds who are exposed to the arts are consequently three times more likely to get a degree? I didn’t, but it has to be worth knowing.

Mallyon went on to discuss how children as young as four or five are captivated by Shakespeare. The RSC offers a novel learning environment in which ideas are valued and kids can immerse themselves in new worlds. In one memorable anecdote, she recalled visiting one primary school in which King Lear was used as frame in which to discuss the idea of unconditional love.

The creative ethos of the RSC led nicely onto the next talk by Danielle Feinberg, Pixar’s director of photography. For her, animation was the perfect way of marrying the technical problem-solving of science and mathematics with the creative thrill of the arts. Animation offers a whole new world of ‘untethered creative freedom’ in which the only limit is one’s imagination.

TEDxOxford provided a stimulating range of speakers and responses to  what the ‘X’ that changes everything could be.

Of course, that’s not to say animation is an entirely blank canvas as there is the still the challenge of creating a world which is believable, if not necessarily realistic. Feinberg described the fine, scrupulous research which went into drawing and animating the underwater effects in Finding Nemo. The physics behind the movement of currents, caustics and the subtle crests of ripples all had to be programmed into the animation process. This is what makes working at Pixar so exhilarating and fulfilling. Animation allows the scientist to become an artist.

Perhaps TedxOxford’s most left-field talk came from clinical psychologist Rosalind Watts, who began with the provocative question, ‘can magic mushrooms unlock depression?’ Watts told us about the fascinating case of Ben who had been depressed for 30 years but was cured after being treated with psilocybin – the substance from which magic mushrooms derive their psychedelic qualities –  in conjunction with short therapy sessions and now, we were told, his career and social life was flourishing.

Ben was participating in a study consisting of twenty individuals with similar cases of treatment-resistant depression. Within six months of the experiment, eleven were symptom-free for just two months, six were in complete remission and for three there was no meaningful effect. These results are clearly staggering. Watts told us that in the case of some patients, more progress was made in six hours than in six years. She was careful to stress that magic mushrooms alone are not the panacea for depression. ‘The patient unlocks depression’, she explained, ‘magic mushrooms show them the key’. There is still a cultural aversion to psychoactive substances but Watts’ study ought to give us pause for thought.

TEDxOxford provided a stimulating range of speakers and responses to  what the ‘X’ that changes everything could be. Both of us hope to see it grow again next year, and that it continues to spur discussion in and out of the theatre. It provided a series of quick, well-summarised approaches to various scientific and cultural issues in a format accessible for its audience.