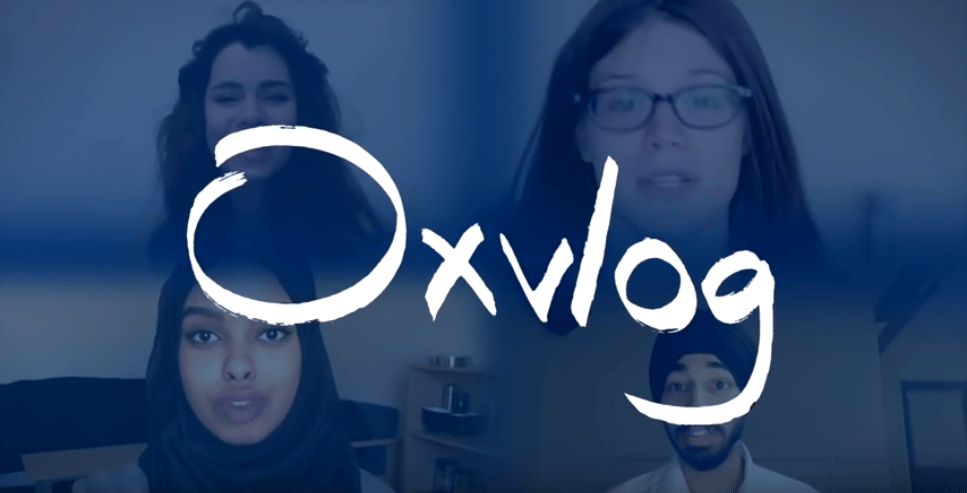 Inspiring the Dreaming Spires: The Power of Vlogging

‘I can’t think of any reason why someone would watch a vlog’, my dad asserted dismissively as I attempted to explain the premise of this article, ‘I just don’t get it’. Vlogging, it seems, is very much the product of a generation which has grown up accustomed to the boundless digital space of the internet. To my dad, vlogging may appear to be a sad conclusion to the development of television which had only just become a common household item when he was born, but it is far from the epitome of millennial narcissism. The fact is vlogging is the most democratic form of visual media. Its evolution as a popular genre of online entertainment has meant that anyone with minimal cost, skill and effort can now reach a global audience using technology which in some African countries is more commonplace than the light bulb.

We are now ‘prosumers’, producing and consuming content at the same time. In this sense, vlogging perfectly captures the zeitgeist of this generation and so it is no surprise that more and more people are trying their hand at it. But the value of vlogging extends beyond just entertainment. Vlogs allow you to see the world directly from someone else’s perspective like no other genre. It’s an intriguing experience and in light of the social makeup of Oxford’s latest intake, the university should be taking note. Oxford already spends over £5 million a year on outreach, visiting schools and running projects such as Uniq, and yet the student body remains a curiously untapped resource. Is this the missing link in Oxford’s access strategy?

Molly Gibson-Mee, a second year Classics and English student at Oriel seems to think so. Having followed the Oxvlog project through her first year, she was inspired to get into video making herself after revisiting her old school in North Devon where the dreaming spires of Oxford really were no more than dreams. ‘I came from that background of seeing Oxford as this inaccessible fortress’, and although she clearly enjoys engaging with her community of over 1000 subscribers, Molly explains that ‘It didn’t start from a desire to make videos, it started from a desire to talk about Oxford and promote access’.

Molly makes a variety of videos for her channel MollyatOxford, from interview advice to the more prosaic aspects of Oxford life, such as reading and essay writing. She also produces a series called Oxford Places in which she explores the city’s iconic locations, underscored by her spontaneous commentary. Her most popular video, a tour of her room at Oriel, has attracted over 100,000 viewers.

Molly’s videos are making an impact too. She has already received comments on her videos from offer holders thanking her for the help and advice she provided during their application process. It is in these personal stories that one can see the value of vlogging. A Sutton Trust survey last year reported that four in ten teachers ‘rarely or never advise bright pupils to apply to Oxbridge’. If there is no support from the school, parents or anywhere else then YouTube constitutes a vital channel through which a potential applicant can connect directly with the Oxford community.

Equally attuned to these challenges is Simon Clark, a Physics graduate from St. Peter’s who was part of the first generation of Oxford’s YouTubers. ‘When I applied to Oxford, I searched on YouTube for “Oxford life” and there was nothing’. At the time, only the Said Business School had an active YouTube account. After uploading videos about his weekly life at the university, he went on to establish Oxvlog which he still oversees from Exeter where he is studying for a PhD.

Now a seasoned videomaker with more than 70,000 subscribers on his channel SimonOxfPhys, he has thought a lot about the value of vlogging and the role it can play in social access. ‘When you’re a student and you’re shown that university life is going to look like this, and it’s a slightly out of focus picture of an ethnically diverse group studying in a soft focus library, you know it’s not really going to be like that’. The whole point of a vlog, however, is that it isn’t professional, nor is it tainted by association with official channels. In vlogs, ‘people will see the information about what life is like at Oxbridge and think, “oh, it is actually really different to what people say, I don’t have to be able to speak Latin, they’re just going about their day like a normal student would”’.

On the surface, vlogging may seem rough-and-ready, even crude, but what makes it distinct from any other form video is its authenticity to which there is a subtle art. ‘The highest production value isn’t necessarily the best production value’, Simon explains, ‘a video which looks a bit shit can often be more effective in getting a message across’. Central to authenticity is not only presentation but substance. ‘They say a picture paints a thousand words, so a video is 30,000 words a second’ – ultimately vlogging ‘is the most efficient way of getting a boots-on-the-ground, personal perspective to applicants’. This perspective has to show ‘warts and all’ or the enterprise is self-defeating. ‘Oxford’s not for everyone’, as Molly clarifies, ‘but for those who can come and thrive here, it’s a broader range of people than you might expect’.

Consciously embodying this ‘boots-on-the-ground’ perspective are the videos of Viola Helen, a first year Classicist at New College. A long-time denizen of the internet, Viola began vlogging her gap year and decided to continue when she took up her place at Oxford in 2016. She adopts a similar approach to Simon when he first produced Oxvlog, recording her daily life in weekly episodes – ‘I wanted to vlog weekly at Oxford because I wanted to dispel all the myths and show prospective students what life is actually like’. But for Viola there is also a personal dimension to it: vlogging is ‘a memory for me so I can look back and see what I was doing during my university experience’. Vlogging, it seems, is a complex genre which, despite its simplicity, serves a multitude of purposes.

“For those who can come and thrive here, it’s a broader range of people than you might expect”

What can the university learn from all this? Perhaps we can conclude that if Oxford is to shape its own narrative and demonstrate that it is not in fact a socially exclusive old boys’ club then it must embrace the sort of online content which its own students are producing. Whilst these vlogs must remain de facto independent of official meddling, Simon suggests Oxford could provide funds with which the Oxvloggers could purchase a decent camera. It may not be too much either to ask the university to mobilise some of the fruits of its £4 billion endowment to publicise the fine work of Oxford’s vlogging community.

Educational inequality is clearly a structural issue in society at large and one which is much larger than Oxford’s admissions system but there is still more the university can do. My dad, and no doubt some key figures in Oxford’s administration, may not understand why anyone would watch a vlog but as Simon artfully puts it, ‘vlogging is a medium in the same way you can communicate ideas through an oil painting or a piece of music’, and in the struggle to define its image, Oxford might as well use all the weapons in its arsenal.