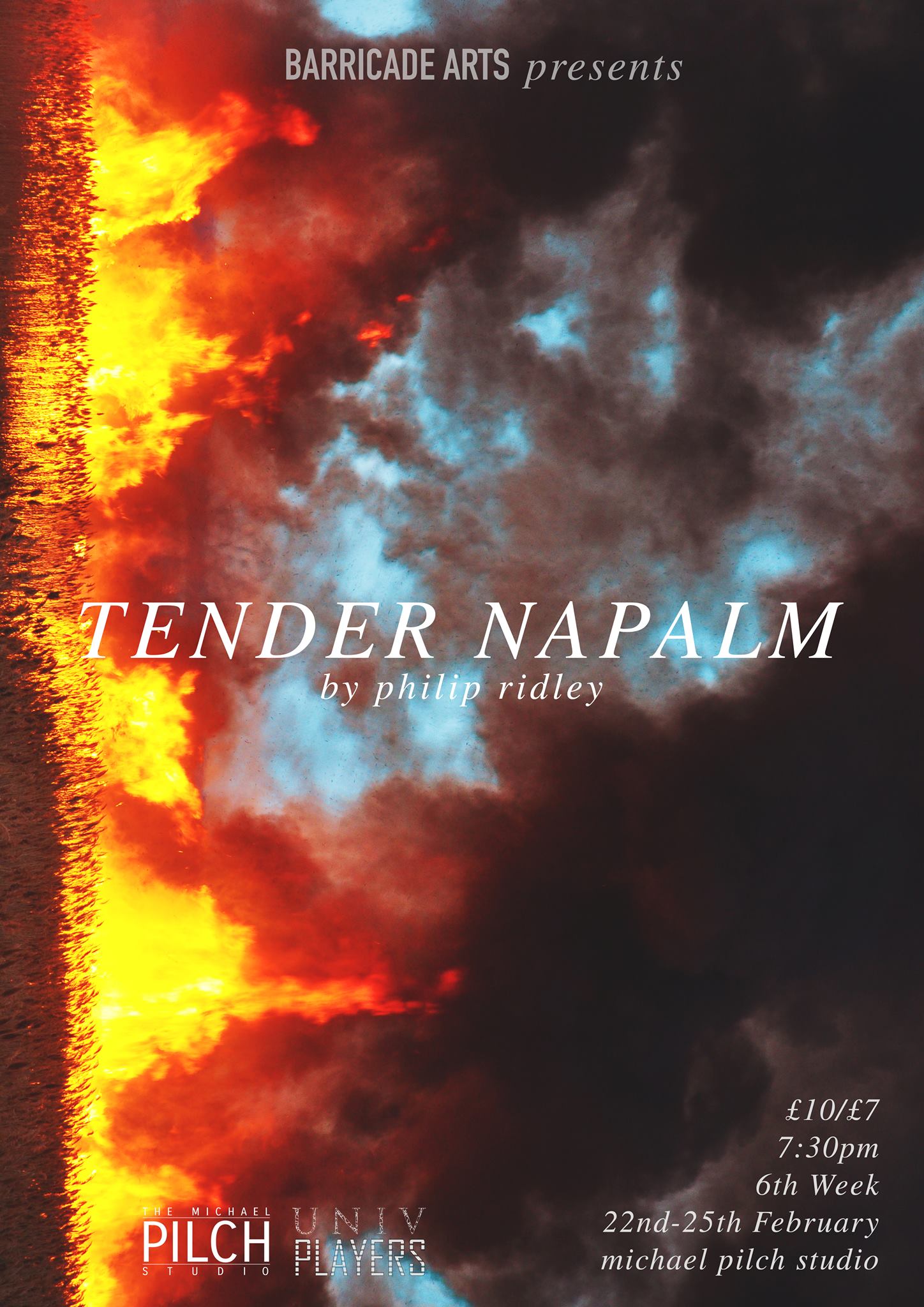 This Saturday I went along to the Tender Napalm rehearsal and got to see two incredible scenes from the play. It is clearly an amazing piece of writing, exploring themes of trauma, sexuality and grief and the two man cast of James Walsh and Hannah Marsters do it justice with mesmerising acting.

I first got to view the opening scene in which the couple are sitting together on the floor engaging in a conversation which becomes increasingly sexual and increasingly disturbing. The connection between Hannah and James is palpable– their eye-contact throughout and ease of closeness makes the scene completely believable and enjoyable to watch.

As the scene continues James leads the conversation to a violent sexual fantasies, and Hannah is dragged under his spell. Both characters start off with seemingly conventional expressions of love, but these then become corrupted. Hannah gazes into James’ eyes, then talks of spooning them out; James touches her mouth and then shocks with the line “I could squeeze a bullet between those lips.” This is clearly a play which tests the boundaries of taboo.

The connection between Hannah and James is palpable– their eye-contact throughout and ease of closeness makes the scene completely believable and enjoyable to watch.

The second scene was a monologue from James which was completely captivating. We are taken into his imagination as he explores a fantasy world, riding a unicorn in the wilderness and talking to his dead daughter. Hannah plays this daughter, and her facial expressions in this scene were really impressive. The lyrical lines of the writing were inherently extremely beautiful, and you are transported to an entirely difference universe through James’ delivery.

Throughout I was especially impressed by the physicality of the acting – both Hannah and James use the space with energy, getting up and down, striding to the different corners of the stage and then holding each other close. They are performing the play in the round at the Pilch – the perfect intimate setting.

Talking to the cast and the director, Catriona Bolt, after the preview, provided a real insight into the sensitive way in which the team has explored the play. Catriona explains that they started looking at the piece with the ending where the characters speak about losing their daughter, to understand the grief at the heart of the play. Hannah talks about the complexity of the characters’ emotions – “feeling and not feeling as opposed to happy and sad” and she also highlights the importance of exploring the mental states of their characters, explaining how they “used trauma as a basis for understanding.” Tender Napalm looks set to be a really powerful and beautiful experience, get your tickets soon.

Tender Napalm is on in the Pilch Studio from the 22nd to the 25th of February at 7:30pm.