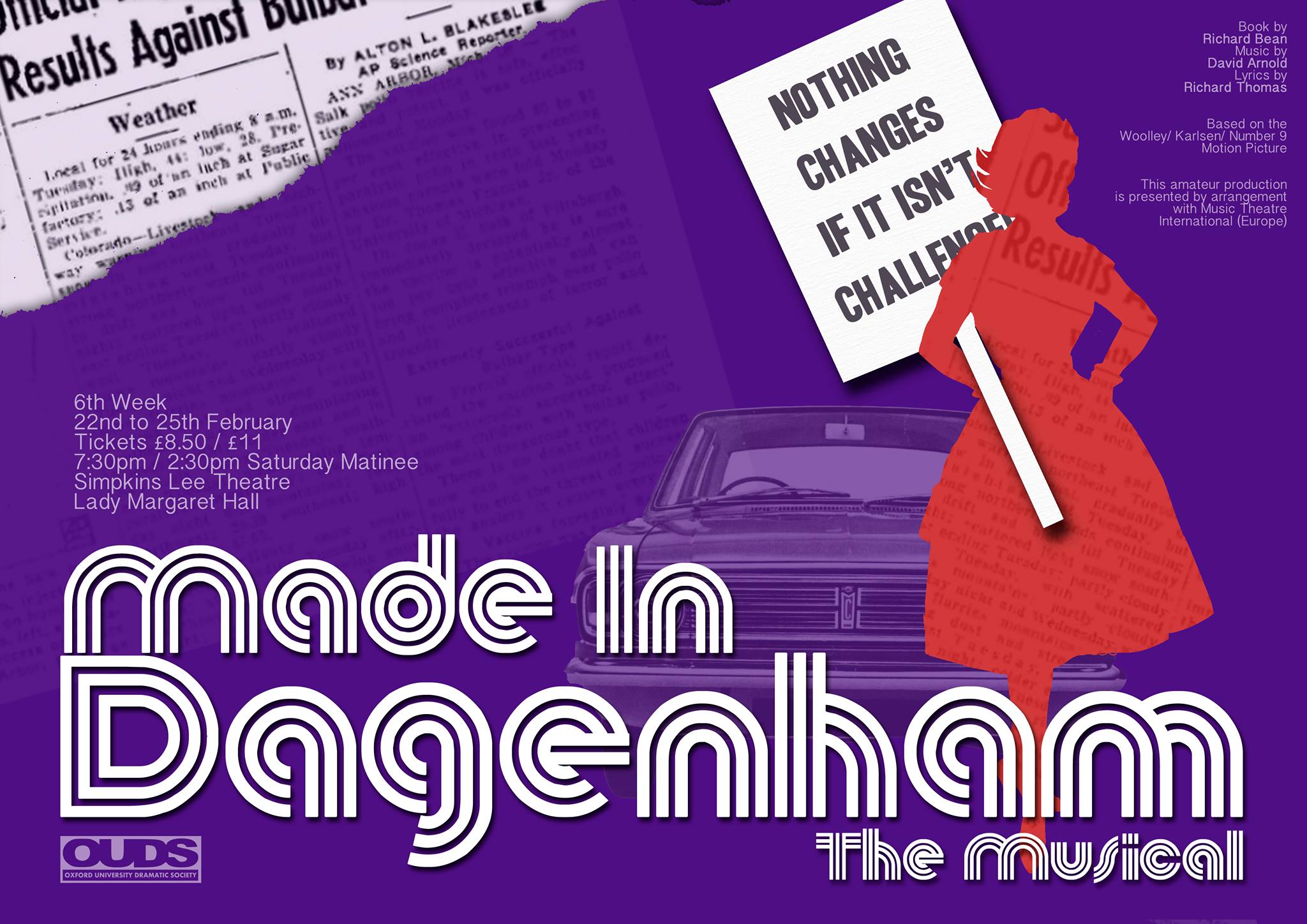 On the 28th of June 1968, a group of female machinists marched on Whitehall, picketing for change, campaigning for gender pay equality, and brandishing a banner emblazoned with the legend ‘We Want Sex’. Nearly 50 years later, Joe Peden’s production of ‘Made in Dagenham’ makes a playful testimonial to this act of political assertion gone wrong, providing the final word to the slogan – ‘Equality’. The simple set captures the character of the piece in miniature; a play in which the hugely inspirational actions of a group of working class women change the course of history. They are armed only with determination, humour, and endearing sincerity.

This production of Made in Dagenham stands out from any other play that I’ve seen recently, and for this reason: I could forgive almost anything about it. The cast could have not been as energetic and talented as it was, the live band could have been less impressive and the lighting not as atmospheric, and I don’t think I would have even minded. For this production achieves one of the most difficult effects to pull off: it is affecting, it is thoughtful and it leaves the audience glowing. As it stands, the only criticisms I can make are some sound issues, and the occasional fumbled line and shaky vocal, yet oddly enough this adds quirk to the piece. As Rita (Cat White) reminds us, these women are not perfect. The national dimension that Harold Wilson (Joe Peden) adds, brings laugh-out-loud humour – the whole row of seats was shaking with laughter. But, it is the intimate, domestic scenes that really draw you in.

For this production achieves one of the most difficult effects to pull off: it is affecting, it is thoughtful and it leaves the audience glowing.

Cat White comes very close to perfection. It is obvious why she is the lead; her acting is brilliantly textured, at one moment wracked with heartbreak, and then by a snap of the fingers reverting back to sharp humour. Stand out performances are provided by India Phillips as Sandra for her pitch-perfect singing, Rachel Jones’ comic timing as Clare, gaining the biggest laughs of the night, and Conky Kampfner’s remarkably controlled and sustained performance as Beryl. These solo feats are wonderfully buoyed by the upbeat group ensembles, in which voices harmonise and reflect the solidarity and friendship of the women through music.

Despite the slightly nervous start, the shape of musical is skillfully controlled. The high points and the climax of the production can only be described as explosive; in the extended strike scenes, the actors make full use of the potential of the Simpkins Lee Theatre, running up and down amidst the audience, their cries of protest and the thunder of their feet hammering their point across. The audience is made to feel included; the actors emphasise the individuality of the machinists, so that at one moment we feel like their friends, enjoying an evening at the pub, whilst in another we are caught up and surrounded by the energy and passion of their protest. There are certain moments in theatre where simply watching seems insufficient- caught up in the drama of it all, the natural action is to pick up a banner, join hands and shout in solidarity. Leaving the theatre, it seems that I am not the only one planning a second viewing, and so for anyone yet to experience the sheer jubilation of ‘Made in Dagenham’, I’d get your tickets fast.