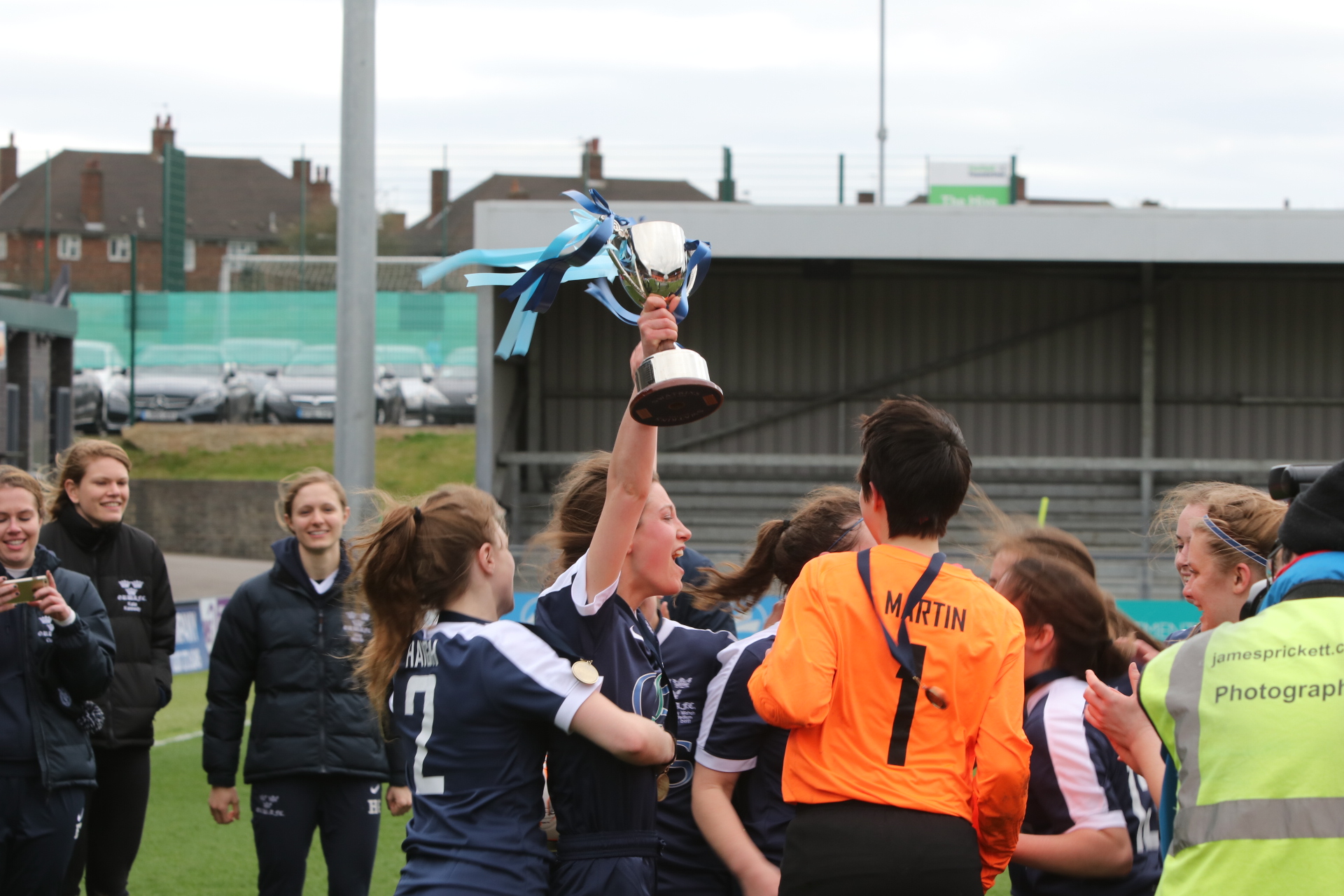 Double Glory for Oxford in Double-Header

For the first time since 2000, Oxford have one both the men’s and the women’s Varsity Football Matches for the third year in a row.

On an historic day, in the inaugural double-header, Oxford put six goals past Cambridge in a dominant display by the Dark Blues.

After a cagey first half that ended goalless, Oxford strike early in the second when Becca May latches on to a through-ball from captain Caroline Ward before dispatching the ball into the bottom-left corner of the Cambridge goal.

Midway through the second half the Light Blues’ captain Bachrati, known for her set-piece skills, lofts a free-kick into the Dark Blues’ box. Oxford struggle to clear, and Hickman nods into the far corner to draw Cambridge level.

Becca May grabs her second with a scintillating solo effort to put Oxford back in the driving seat. Pushed out wide and surrounded by Cambridge defenders, May pulls off an outrageous chip from a tight angle to leave Light Blues keeper Bleehen helpless as she watches the ball sail into her far corner.

Magnificent May seals the win for Oxford with another composed finished. Sprinting clear of the notoriously high Cambridge line, the Dark Blues hat-trick heroine rounds Bleehen and strokes the ball into an empty net, bringing Oxford fans to their feet and earning herself the match ball and Player of the Match award in the process.

May the Magician proves the difference for Oxford

The Varsity Match is the pinnacle of sporting achievement for an Oxbridge student. The players go into the game with one objective on their mind: winning. The context of the game makes for a tense encounter, with both sides looking to avoid mistakes.

Therefore you need your strikers to be especially ruthless in front of goal, and Becca May was just that. Although Cambridge matched Oxford in the first-half with their intensity and hard work, Oxford’s striker split the two sides on the day. The Light Blues will feel that maybe they could have emerged victorious if they had May in their side.

Ward and Lopez pull the strings in midfield

If May separated the two sides on the day, then midfield duo Ward and Lopez showed why OUWAFC have been playing in a league above their Cambridge counterparts this season.

Their ability to take it past players in key areas before cutting through the Cambridge back four with incisive passes relieved pressure on the Oxford defence and gave the Dark Blues superior territory throughout the game.

The Tabs will be devastated to have lost the Varsity Match for the third year running, but there are certainly signs of hope for Cambridge.

Using their pace on the wings and up front, Rebecca Graves and Xelia Mendes-Jones posed a frequent threat to the Oxford defence. In the end, however, they lacked their opponent’s composure in front of goal and class in midfield.

Having seen OUWAFC lift the trophy minutes before warming up, the Oxford men could not have been more motivated for defeating Cambridge in what would turn out to be a bruising encounter at The Hive.

The Dark Blues were certainly the quicker out of the blocks. Twenty-four minutes in Sam Hale, who has had a superb debut season with the Blues, leapt like a salmon to meet Alex Urwin’s corner, planted a header on to the Cambridge crossbar. Dom Thelen, averaging 80 minutes a goal this season, was the quickest to react and buried the ball into the Cambridge net from a yard out.

Billed in the match-day programme as “the man the Blues look to when they need something special”, Ben Bolderson, the Cambridge left-winger, lived up to his billing by deftly dinking the ball over an onrushing David Windmill to draw his side level.

Oxford will have been disappointed to have gone in level at half-time. Thelen provided them with the impetus again, gliding past the Cambridge left-back before whipping in a low cross into the box which Cambridge centre-back Raffi Salama could only turn into his own net.

Minutes later the Dark Blues doubled their lead. The overseas signing from (la Universitat de) Barcelona Joan Crespo, who has fitted seamlessly into the team, needed two bites at the cherry, slotting the ball into the bottom right corner from close range after a Cambridge defender had blocked his first effort on the line.

Stefan Wolf, one of Cambridge’s six returning Blues, then made for a tense finish by setting up substitute Marcus Nielsen with a sumptuous pass over the Oxford back four. Nielsen was precise with the finish, but it proved too little too late for Cambridge, who finished the match as the losing side for a third year in a row.

Although Oxford certainly deserved to win, this was no walkover for the Dark Blues. Cambridge showed that they were up for the battle from the first whistle, flying into the challenges and competing for every 50-50.

Danger-man Thelen as potent as ever

One of the fastest players to a half-century of goals in university and college football, Dom Thelen was always going to be an integral part of Oxford’s attacking threat on the day. His ability to ghost past defenders, react first to any rebounds, and find his teammates in and around the box meant that the Dark Blues looked like scoring whenever he went near the ball.

Man of the Match Moneke makes a victorious farewell

With two wins and two losses prior to this Varsity, Oxford centre-back Michael Moneke arguably enjoyed the sweetest victory of his university football career with this win.

It was by no means a flawless performance, but whenever a mistake was made by any Oxford player, Moneke would always be on-hand to clear up the mess. The man is blessed with electric pace, peerless composure, and the ability to spot an oncoming threat to his goal from a mile away. He made more blocks and more tackles than anyone else on the pitch, and has certainly bowed out in style.

His centre-back partners, Sam Hale and Cian Wade also deserve credit for Oxford’s defensive stability. Perhaps taking inspiration from Antonio Conte’s Chelsea, the Dark Blues have played almost the entirety of this season with three central defenders. The integral wing-backs, Alex Urwin and Luke Stamper, were solid in defence and offered great quality on the ball going forward, launching many an Oxford attack and gaining their team some much needed territory.

What does the future hold?

Oxford will lose some significant big names next season. Midfield dynamo Dan Brown, the tireless Michael Feeney, and keeper Windmill will all sorely be missed going into the 2018 Varsity.

However, the Dark Blues have given debuts to a crop of very talented players who will go into next year’s match with greater experience and the task of making it four in a row.

The team will not be short of leaders. Wulfie Bain in centre-midfield has already led Brasenose College to cuppers glory and sets an example for his teammates on the pitch through his relentless work ethic. Alex Urwin, who steered Exeter College to JCR Premier League survival this year, is a born leader, and will no doubt continue his development into one of Oxford’s finest ball-playing centre-backs.

There were players who did not feature on the pitch today who also deserve a mention. Till Wicker, who followed Bain and Urwin from the Centaurs to the Blues squad last season, was dogged by injuries during this campaign and was incredibly unlucky not to play this time around. Another 2nd year Jack Witt was disappointed not to be named in the match day squad, but his ability to gallop past defenders with the ball will no doubt be utilised more often by the Dark Blues next season. Steve Pilley, in his final year at Oxford, will also be gutted not to have featured in today’s match, but a cuppers victory with Teddy Hall this year is probably the best consolation. Having only come into the university football set up in his last season, Pilley has shown great determination to be where he is now, and should leave Oxford with his head held high for his services to the club.

What the captains had to say

Could you sum up the day of the 2017 Redburn Football Varsity Match in three words?

Is this the pinnacle of your sporting career?

Loz: Probably, though hopefully it will be bettered at next year’s varsity!

Will you do anything differently next time round?

Loz: Nothing particularly stands out but maybe if we lost I would change it!

Caz: I think my advice to the squad next season would be to take training a little easier in the week running up to varsity. I think I planned a bit too much training for us and I certainly felt like my legs were a bit heavy the day of the game. Inevitably the adrenaline and desire to win gets you through it but I think I made it a bit harder for us all.

Next season, you’ll both going into what is likely to be your final year at Oxford. How big a part of your university life has football been, and will you carry on playing the beautiful game when you leave?

Caz: Doing a Master’s course next year, I’m not sure I will be able to escape the lab on Wednesday afternoon to continue playing next year. I also think it would be nice to end on a high.

Loz: It’s been a really big part and I’ve really enjoyed playing for both college and university alongside my studies. I’ll definitely still be playing after uni, though at what level will depend on my job.

Both of the Blues teams have now won three Varsities on the trot. What has been the formula for your success?

Loz: I think we’ve prepared really well over the past few years, not just physically but mentally as well. Playing in front of a large crowd and in such an historic fixture does make the game a lot different. It really helps too that our coach Mickey Lewis has been in the job for about 15 years now! Also a sense of belief – in the two Varsities I’ve been involved in we have gone into the match thinking we are going to win and that winning mentality really does help!

Caz: To be fair I’m not entirely sure. Our game this year was certainly more evenly matched than it has been on previous years. I think we’ve been fortunate to have some really good coaches and I think they have definitely been a massive factor in our victories. Our coach this year, Rob, always went the extra mile for us and his technical expertise and commitment really brought the best out in everyone.