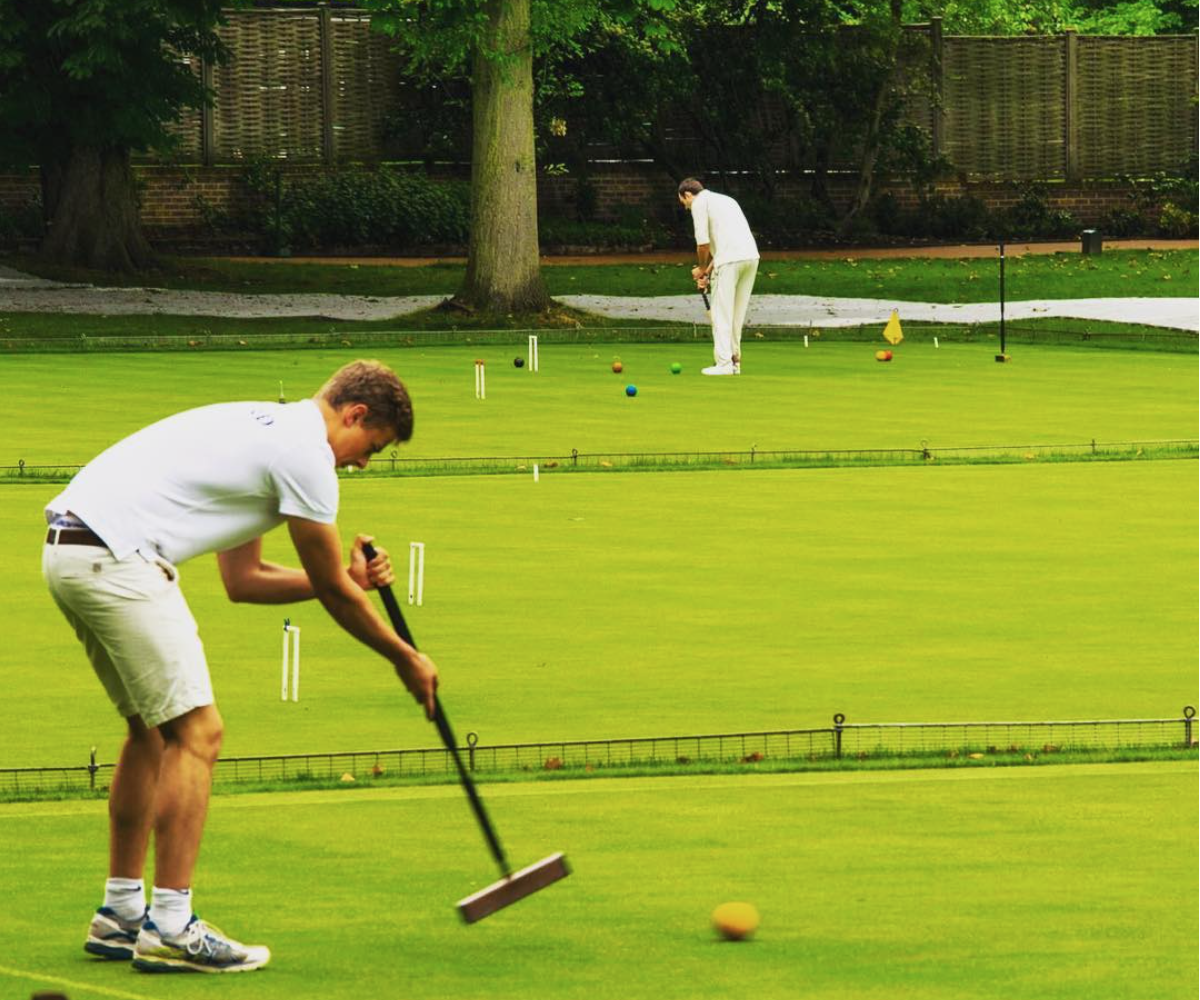 The game of croquet is one with indelible connotations of Oxford life, an integral part of the sepia-hazed, Brideshead Revisited image of long summer nights on the lawns and quads of the university.

For many first-years however, this term will be the first time they encounter the game, played using mallets to manoeuvre heavy balls through a series of hoops. Despite its slow-paced and leisurely reputation, the game can provide some thrilling moments, with ‘roquets’ providing an opportunity to send your opponent’s ball far away from their intended target, and even the prospect of ‘poling’ an opponent’s ball, forcing them to return to the beginning of the course.

As well as relaxed games around every college – the ideal form of Prelims or Finals procrastination – Oxford plays host to the annual Croquet Cuppers tournament, rumoured to be the largest such tournament in the world, with over 2000 entrants last year. Watch out for the Univ 8 team, raring to go after some heavy pre-Prelims croquet last year!

Tennis – Will Stone, player for the University 2s and captain of the 3s

Although a year-round sport, Trinity Term is the real highlight of the Oxford tennis calendar. For the university teams, the supposed sunshine and warm weather brings with it the transition from early mornings and indoor hard courts to long afternoons spent training on Oxford’s grass.

The much-anticipated Varsity matches take place at the end of the academic year and the focus of this term is solely to prepare for the showdown with Cambridge. The tabs will host the 2s, 3s, 4s and 5s with the matches taking place on the 24th and 25th of June. After defeat on home turf last time out, M2, W2 and M3 will be looking to wrestle the titles back to Oxford and the teams are looking strong after retaining many of their key players from last year with the addition of several talented freshers.

W3 have gone from strength to strength since their dramatic final-rubber win over Cambridge a year ago and, with the Swifts winning their BUCS league in style last term, things are looking good for a repeat victory at Varsity. The Blues matches will most probably take place at the North Oxford Tennis Club on 1st and 2nd of July and both teams look in good positions to complete do the double on Cambridge once again with strong squads bolstered by new faces this year.

Competition for spots will be extremely high in 2017 with everyone vying for one of the eight playing spots in each team. People to watch out for include grass court specialist Dillon Lancaster, who will be vying for a blues spot after impressing at last year’s 3s varsity with his trademark one handed backhand and Harry Gilfillan who, if kept on the straight and narrow this term, is one of the club’s most prodigious talents. All teams will have friendly fixtures throughout the term so make sure to head over to the pristine lawns of Iffley to watch some exciting action.

In addition to university tennis, the college scene kicks off in Trinity with mixed cuppers being the showpiece event. Cuppers powerhouse St John’s were triumphant last year, narrowly beating brave underdogs Queen’s in a controversial final. Queen’s will look to go one better this year after a giant killing run that saw the unearthing of several talented players; cuppers provides an excellent opportunity for non-university team players to showcase their skills on the biggest stage.

Outside of Cuppers, there are several leagues and social tennis events run by the OULTC so there is plenty of tennis on offer for all standards. Head over to www.oultc.org or like the facebook page to keep updated.

This Trinity is the perfect time get into tennis with so much on offer over the next eight weeks, not to mention the resurgence of Roger Federer making the sport effortlessly cool once again!

Spring is always awaited with anticipation by athletes as it means the start of the track and field season!

With a flurry of events in the first four weeks of Trinity, the ones to look out for include BUCS, Cuppers, and of course, Varsity. Chances of a win at varsity for the first time in years are looking good, as Oxford smashed Cambridge in the indoor meet last term, taking both the men’s and women’s title.

Cuppers is open to all – I would encourage people to pull on some trainers and come try an event! That’s part of the beauty of the sport; to run, jump or throw, all you need is yourself and a pair of shoes – anyone can do it! Get down to Iffley on the 6th May and give an event a go- you might surprise yourself!

Trinity Term is a great time for taking up, getting back into, or upping your long-distance running. If athletics is just that little bit too short, or you are petrified at the sight of a running track, then why not sign up for the Oxford Town and Gown.

The distance is 10K. The charity is Muscular Dystrophy. The course is spectacular. Whether you are a seasoned runner, someone with a penchant for a bit of casual jogging in the sun, or a complete beginner, the chances are you will thoroughly enjoy this event. Your college may subsidise your entry fee, so speak to your Sports rep for more details.

For those of you looking for something a tad shorter, the Oxford Parkrun takes place every Saturday morning at 9am at the Cutteslowe and Sunnymead Park. The venue is a fifteen minute cycle from the centre of Oxford, but this is the perfect opportunity if you need the motivation to run regularly. The organisers will give you time free of charge, so the Parkrun is a great way to measure your progress.

The boats are meticulously positioned in a line at equal distances apart, from Donnington Bridge all the way back to Haystacks, with linesmen holding the boats in place and ordering “taps” (small stokes) from rowers 1 and 2 for repositioning just seconds before the crack of the gun.

Then the race begins, and every crew’s aim is to catch up with the bow of the boat in front and “bump” them to secure their victory, before the boat chasing behind them does the same. Of course, due to health and safety, the coxes are encouraged to concede before an actual collision takes place, but nevertheless, expect magnificent swerves, lost oars and stylish blade work as every college fights to move up the ranks or maintain their place in their division.

This year, Oriel M1 and Wadham W1 are defending their respective titles as Heads of the River.

It is one of the most hotly anticipated sporting events in the university calendar, the atmosphere on the bank is unlike any other, and if the rowing itself doesn’t convince you, head down there for the magnificent weather, barbeques and Pimms!

The archetypal British summer sport reaches fever pitch in Trinity. With cuppers and Varsity both taking place during this term, there will also be a feast of action to lay your eyes on or get involved with.

Many argue that the lengthy playing time for this game means that it is not the ideal pastime for a busy Oxford student. However, the fact that, when batting, only two out of the eleven players in your team need to be on the pitch, means that there are plenty of intervals for revision, essay writing, and problem sheet solving.

Moreover, for those of you in search of a relaxing afternoon in the sun, college cricket is the ideal solution. Boundary-rope fielders are renowned for idly sunbathing away, sipping on an ice cold beverage, and there are even breaks halfway through the match for tea!

With 11-a-side football taking place in only Michaelmas and Hilary, the myriad lovers of the beautiful game will turn their attention to 5-a-side this Trinity.

Cuppers will be taking place in the first half of the term. Last year, Blues midfielder Till Wicker fired Catz to a 5-a-side glory with a scintillating display. His team were down and out in both the semis and final, but his silky skills rescued his college from the bowels of defeat and meant that his college maintained their impressive form in the competition. A Queen’s college outfit, fresh from their second-place finish in the dizzying heights of the JCR Prem in Hilary, will be looking to swap places with 11-a-side league winners Catz this time around.

Outside of college competition, many football lovers will be heading down to their local 5-a-side pitch, 3g, or park to engage in a more leisurely affair. Even if your footballing experience is limited to a kickabout in the garden with your family, even if you are using jumpers for goalposts, and even if you think that footballers’ wages are obscenely high, there is still plenty of fun to be had in a casual game of 5-a-side (or four if you are struggling for numbers) with your friends.