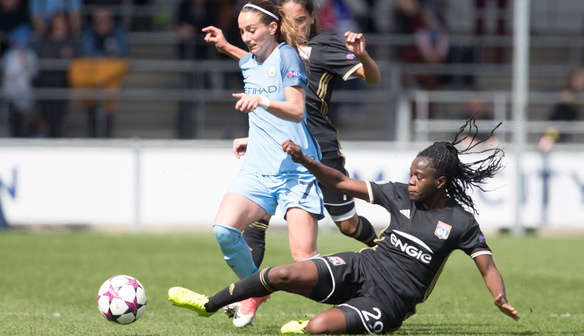 Carli Lloyd vs Alex Morgan. Immovable object vs Unstoppable force. For the benevolent creator behind the Women’s Champions League Semi-final draw has blessed the footballing world with a titanic clash between two of it’s finest assets, and their new adopted European homes, as English Champions Manchester City have been pitted against French giants Olympique Lyon in a simply unmissable clash.

Despite her advancing years, now 34, Carli Lloyd is by no means entering the twilight period of her career, and it is even arguable that she is still yet to reach the ceiling of her ability. Early on in an encounter against Japan in 2015, Lloyd picked up the ball inside her own half and then proceeded to audaciously lob the Japanese goalkeeper from the halfway line. The goal was outstanding – one of the finest ever scored – and that is remarkably even with the context muted. It was the 2015 World Cup Final, Lloyd was captaining the United States side, and the goal completed her hat-trick inside the fifteenth minute of the game. Lloyd ended the tournament as the top scorer with six goals, and was awarded the Golden Ball as the best player for her untouchable feats. She was subsequently named the FIFA World Player of the Year for 2015, and then repeated the trick again this year, affirming her status as the World’s finest.

An American team-mate of Lloyd’s, Alex Morgan has an equally impressive international pedigree, and she is seven years younger than Lloyd at 27. Bursting onto the scene as a 21-year-old, Morgan immediately developed a propensity for late heroics for her National side, rescuing them on numerous occasions. In 2010, the US came perilously close to what would have been a first domestic loss since 2004, against China. Morgan was subbed on in the 71st minute, for just her third cap, and scored the vital late equaliser. In a World Cup Qualifying play-off against Italy a mere month later, Morgan again netted in the dying embers of the game, this time to secure victory.

Fast forward to the 2012 Olympics, now on the global stage, and in the 123rd minute of the semi-final against Canada – the score locked at 3-3 –of course it was Alex Morgan that summoned all of her aerial prowess to head into the top corner of the Canadian net. In the final itself, she then provided the assist for the winning goal, scored by a certain Carli Lloyd. So impressive was she, that in jest for almost solely carrying her side to victory, she was endearingly nicknamed ‘Baby Horse’. Ailments of the knee and ankle threatened to curtail her progress throughout the three years that followed, but in 2016 Morgan was simply sensational, emphatically shedding the tag of young pretender. At the inaugural SheBelieves Cup, an invitational tournament akin to a who’s who of women’s elite, Morgan was awarded the Golden Boot and the MVP awards, and then at the Rio Olympics she was too named in the best XI of the tournament. So clinical is Morgan – boasting 73 goals in 125 caps – that she now holds a piece of unique trivia, and in netting after just 12 seconds against Costa Rica in February 2016, Morgan lays claim to both the quickest, and latest goals ever scored in the history of the USNWT.

So why have the duo, key architects of this impressive American juggernaut, left stateside to join European teams? The opportunity is not new – neither have been successfully enchanted by the lure in the past – rather more the timing now being the ramification of a developing situation back home. The pair have expressed desire to experience the pinnacle of the facilities and infrastructure that European football can provide, whilst simultaneously raising the profile of the Women’s game on these shores to the levels of hype back home. It is an almost paradoxical marriage – leaving, what is superficially the World’s hotbed of Women’s football, in order to seek the optimal conditions required to improve their game further, but it is representative of the ever-souring state of affairs for in the US currently.

2012 Olympic Champions, 2015 World Cup Champions. The Dominant big sister to the US Men’s team. Yet off the field mobilised and threatening to travel in an ugly backwards direction that would detract from the great success that has been achieved.

The US’s NWSL has reached groundbreaking territory. Entering its fifth season this year, it has now successfully outlasted America’s two previous attempts at professional ‘soccer’ leagues; the WUSA and the WPS. But a dark cloud has been cast, for its prized assets are embroiled in a protracted labour-dispute over equal pay. They are adamant that FIFA treat the Women’s game with more respect, but their voice is seemingly not being heard, and its opposition’s bitterly low willingness to engage in immediate discussion is unfortunately rendering the NWSL vulnerable –a punching bag for inequality complaint.  Along with Lloyd & Morgan, Heather O’Reilly (Arsenal) and Crystal Dunn (Chelsea) have also sought hiatus from the toxic environment, but the elite ensemble are adamant that they are not abandoning their vision back home.

Stability in the American game is entirely necessary for the continued development of Women’s football, but in Europe (and especially in England) – the short-term benefactors of the fallout – the presence of Lloyd and Morgan must be capitalised upon whilst it lasts, and the duo represent an invaluable boost to the sustained endeavor to reach the mainstream media threshold.

Manchester City Women, Carli Lloyd’s new team, went unbeaten in 90 minutes throughout the duration of 2016, winning the WSL and the Continental Cup, and this season they have the potential to win the treble, a historic feat that would amount to a haul of 5 trophies within 9 months. Alex Morgan’s Olympique Lyon, however, are the benchmark of European football, having reached the Champions League final five times in the past seven seasons, and the French club lifted the trophy last season, beating a Wolfsburg side that Manchester City have already swept aside this time around. It may not be the Final of the tournament, but make no mistake, it is one of the most high-profile matches ever played in the Women’s Champions League.