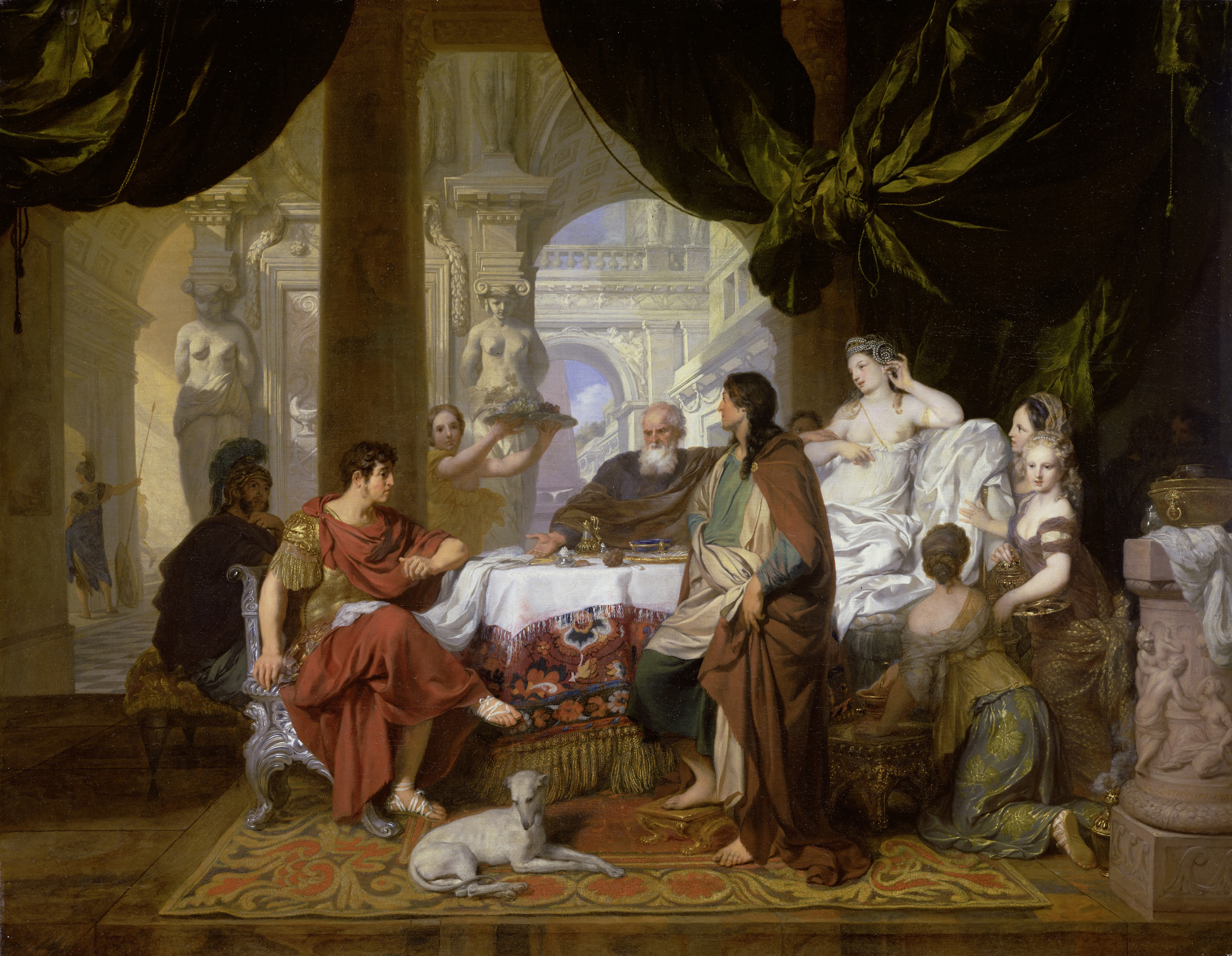 A climactic scene in Shakespeare’s Antony and Cleopatra ends with the lovers draped atop an Egyptian monument: one royal dead, one soon to be. Iqbal Khan’s Royal Shakespeare Company staging took this monumental image, and superimposed it on the entire production. It was a show of epic proportions, from its set of stately grandeur to its bloated three-hour length.  Unfortunately, this visual impact frequently came at the expense of nuance and detail.

Part of the RSC’s Rome season, Antony and Cleopatra is performed as a double-bill on the same set as Julius Caesar. Evidently, no expense was spared on Robert Innes Hopkins’ set. In the Rome-set scenes, huge, Brutalism-inspired columns, steps, and platforms dominate the playing space, with different platforms and objects appearing onstage or rising from the floor at various moments.  In Egypt, the set is sensuous but equally lavish: furnished with plush decoration, rich fabrics, imposing statues. The transition between these different settings is seamless. Objects rise and fall through the floor, as the set shifts and melds smoothly. At times, the actors interact and scenes are played out while the set transforms, giving the audience the sense of an unstable world of rapidly changing affections and political affiliations. I found myself awe-struck at every new sight and shape.

It was a show of epic proportions, from its set of stately grandeur to its bloated three-hour length.

Of course, lavish sets at the RSC are nothing new, and they are certainly not short of resources. Yet imposing and imperial as the set was, it felt like a better fit for the world of Julius Caesar than Antony and Cleopatra. The former concerns the epic Rome: pure politics, the focused city setting, historical figures who remain household names today. The latter played out more as a character study: what happens when our focus fades, and we are distracted by emotion? What happens when those entrusted with rule lose their form? The difference in focus meant that the interiority and claustrophobia of Antony and Cleopatra felt overshadowed by the epic set. Especially in the first half, the audience’s attention was frequently turned to the physical nature of what they could see, at the expense of the nuanced performances on show.

The performances in the female-centric world of Alexandria made the machismo of Rome pale in comparison. Josette Simon was a captivating Cleopatra. Intermittently playful, flirtatious, jealous, impetuous, regal, and tragic, Simon’s persona switched and changed as many times as the set. She was a reminder of why Cleopatra is considered to be one of the most well-written and diverse female parts in Shakespeare. All eyes were on her, and she commanded the audience’s attention in the same way she commanded her lover’s, servants’, or conqueror’s. With an implacable, lullaby accent (which grated a little at times)  she was played as incredibly energetic and comedic, winning the audience over but leaving the tragedy of her later scenes feeling somewhat rootless.

Intermittently playful, flirtatious, jealous, impetuous, regal, and tragic, Simon’s persona switched and changed as many times as the set.

Her entourage of maidservants, eunuchs and the occasional Roman visitor were similarly adept, effortlessly creating the sensuous and lush court of imperial Egypt. Amber James as the faithful Charmian stood out, blending playfulness, loyalty, and resolve. The same cannot be said for the Roman scenes. Antony Byrne as Mark Antony was muted, naturalistic, and somewhat reluctant. Far from portraying the fall of a great man, he seemed almost broken throughout. In a different production, this version of Antony would have worked, but in a version of such scale, attention-grabbing performances were needed. Andrew Woodall’s Enobarbus was one of those performances: he strutted around the stage oozing Cockney charisma, delivering lines like the Danny Dyer of Ancient Rome. The other Romans were strong and by-the-book: Ben Allen shone as the youthful Octavius Caesar, trapped between imperial ambition and a youthful pettiness, and Patrick Drury had gravitas as Lepidus, the old blood quickly dispatched.

Although the set was a little too grandiose, the design as a whole was cohesive and accomplished. Tim Mitchell’s lighting played off the diverse shapes created on stage to portray a range of different moods, creating a parade of silhouettes and vivid colours as a backdrop to the action. It also captured the feeling of natural light more successfully than anything I have ever seen. The original score by Laura Mvula, a newcomer to the RSC, was enticing, pulsating through the auditorium with mysterious energy, at once soothing and unsettling, and building to a powerful climax. A classically-set Rome production allows a limited degree of innovation in the area of costume design, and the costumes, while accomplished, were predictable. Cleopatra’s final costume, which she wears so that she may meet Mark Antony in the afterlife looking as regal as she did in life, was the standout. Unfortunately, this was overshadowed by her preceding full frontal nudity. Having shed her wig to show her bare head, her real and unornamented self, she is stripped entirely naked, a decision which felt unnecessary and distracting from the emotional gravity of the scene.

The political subtext of plays concerned with the fluctuations of extreme power, and the very real danger of an unstable despot, is clear for any and all to see. The double bill feels fresh and topical, and the choice of plays makes a subtly defiant statement in a challenging political climate. Khan’s production, although beautifully crafted, errs on the side of distracting sensationalism. His images, while powerful and resonant, were ultimately too much. This left the clarity and nuance of the dialogue, and the relationships between characters, to play a secondary role, which seemed a jarring decision for a venue like the Swan Theatre. However, the show is worth seeing for the design alone, and I will certainly be returning for the other half of the Rome double bill.

Antony and Cleopatra runs at the RSC until the 7th of September.