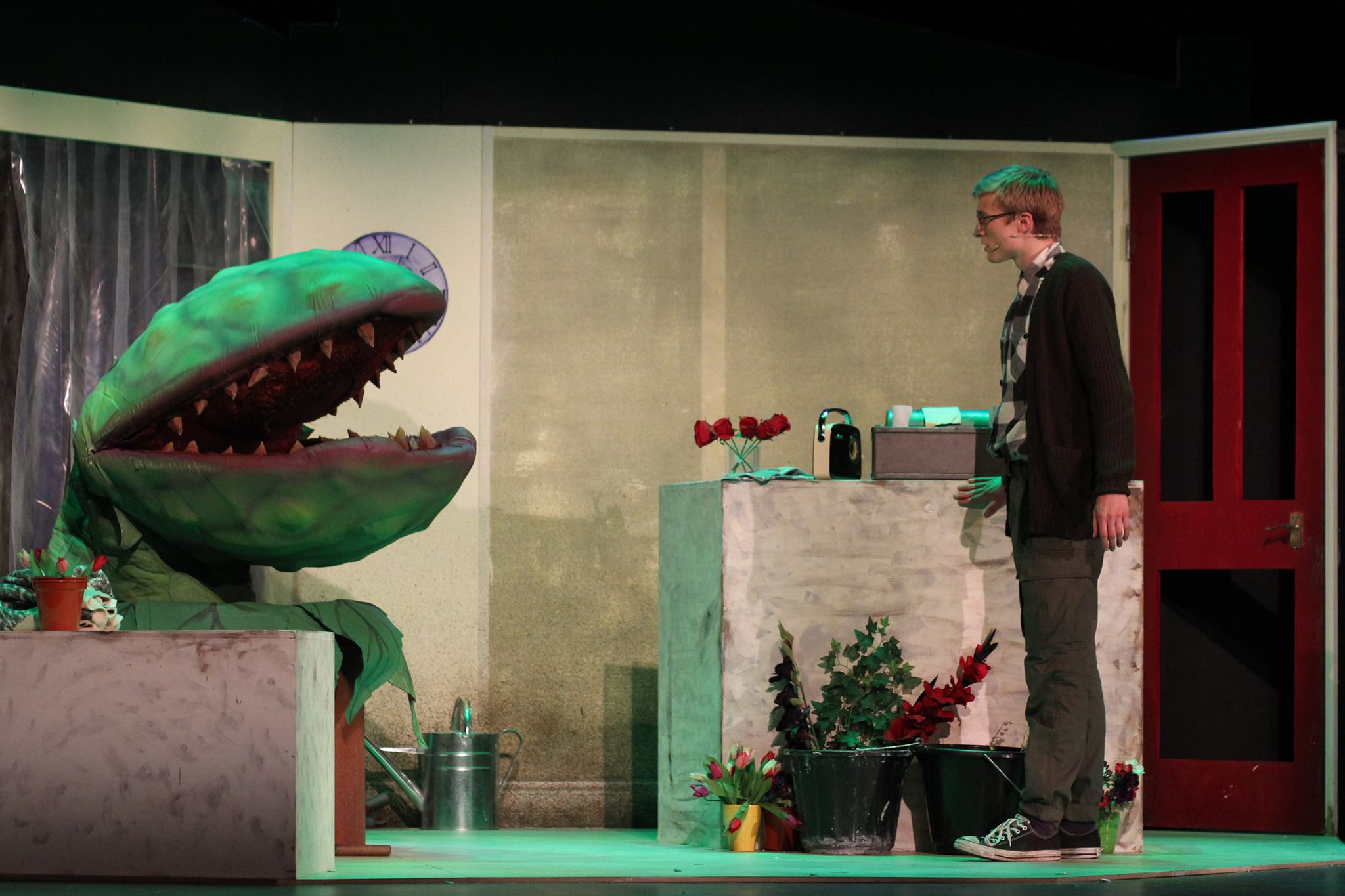 Little Shop of Horrors is a weird, wacky and wonderful musical. A cult classic I had failed to encounter before I took my seat in the Playhouse and I didn’t quite realise what I was in for; it was a very strange experience but also a brilliantly entertaining one. A musical about a young botanist in love, a man-eating plant on a quest for world-domination and, not to mention, a sadistic, leather-clad, dentist, certainly sounds bizarre but Jonny Wile’s production embraces this peculiarity with vigour. This celebration of the unexpected is what makes the production so fun; everything is a little bit over the top but in a way which is appropriate to the show. Little Shop of Horrors is a musical which can be taken at face value, its purpose seemed to be to entertain and amuse; it achieved this and more.

This show was certainly well cast. First and foremost, I must focus on Seymour and Audrey, the love story at the centre of this show. Both James Tibbes and Amelia Gabriel fit these roles wonderfully; they gave strong performances as individuals, the comic timing of Tibbes as Seymour was particularly note-worthy. However, it was when these two came together on stage that they really shone. The chemistry between Tibbes and Gabriel reflected wonderfully on stage and they portrayed Seymour and Audrey as truly endearing couple. Their rendition of ‘Suddenly Seymour’ left me rooting for this couple in a way I have never done for an on stage pair, a testimony to the performances of Tibbes and Gabriel.

This celebration of the unexpected is what makes the production so fun; everything is a little bit over the top but in a way which is appropriate to the show.

One thing standing in the way of Audrey and Seymour is the presence of Orin, Audrey’s abusive boyfriend. The inclusion of a subplot of domestic abuse in this otherwise humorous musical was a choice which confused me and at times left me feeling uncomfortable. However, I think it was handled relatively well by the show and supplied another dimension to the story. It is the abuse of Audrey which makes the character of Orin, played by Laurence Belcher, so detestable. I had always suspected dentists were a little sadistic but Orin takes this to an entirely new level: he is a truly disgusting and disturbing character. Orin was an interesting character to have on stage because I found myself laughing one minute, and squirming in my seat the next. Credit must be given to Belcher for handling this character and even managing to inject humour into him; Belcher is another example of an excellent casting choice.

The star of the show was no doubt Audrey II, played by Jess Bollands; bringing a plant to life can not be a simple task but Bollands manages to execute this with ease. Probably my favourite character in the show, I can forgive Audrey II for eating half the cast because she does so with such sass and hilarity. Moreover, Bolland’s vocal performance was one of the strongest in the whole cast and the jazzy undertones that were carried in the voice of Audrey II added another intriguing but enjoyable element to this character. The puppetry involved in bringing Audrey II to life was pretty impressive: there were several different versions of the plant, all of which were remarkably convincing. You could not fail to be impressed by the culmination of Audrey II’s growth, when a giant mechanical plant puppet dominates the stage. Every time Audrey II consumed a new victim it was met with laughter from the audience, and I appreciated the flourishes with which the plant consumed her victims. These moments highlighted the true nature of Little Shop of Horrors, it is a show which manages to be funny whilst simultaneously being horrific.

The light and jazzy sound provided a surprising but effective juxtaposition to the actual gory story within the musical.

However, whilst the techniques used to bring Audrey II to life were an example of some ingenious set design, I felt like in other areas the set design was lacking. I thought more effort could have been made to highlight the grim reality of life on Skid Row: the hanging background looked more like it was depicting leafy suburbs. A scene change, which introduces a dentist’s office, seemed to be a little clumsy. Moreover, the decision to have the band on stage was perhaps erroneous, it seemed out of place with the rest of the set design and, at the beginning of the musical, I found it to be slightly distracting. However, these issues were relatively inconsequential in a show with so much energy and excitement; by the time we had reached the second act I was so enthralled by the cast and the Audrey II puppets that I didn’t take much notice of the rest of the set.

Little Shop of Horrors is a musical and the music of this show was delightful, the light and jazzy sound provided a surprising but effective juxtaposition to the actual gory story within the musical. Whilst I disagreed with the band’s positioning on stage, I can not fault their execution of this remarkable score. There were times when I was left questioning the strength of the vocals of some members of the cast, which was not helped by a couple of sound glitches, although I think this can all be put down to opening night nerves.

Little Shop of Horrors provides its audience with a good dose of fun and is executed well by a very strong cast. There are two things that can be taken from this show; one is a great sense of amusement and enjoyment, the other is the invaluable piece of advice: ‘Don’t feed the plants.’

Little Shop of Horrors is on in the Oxford Playhouse until the 6th of May.

SAG and DGA awards: The Artist needs no Help