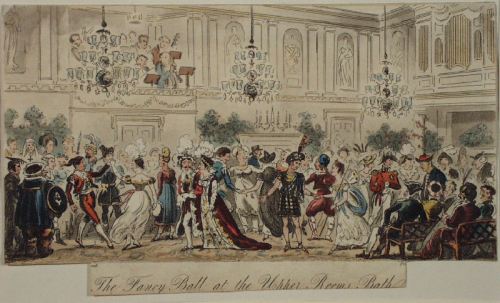 All this talk of dressing up has got me thinking, where did it all begin? Like many parts of history, it turns out we are not entirely sure. But one thing is for certain: the Masquerade movement was very important, though fancy dresses began very differently from what we know today.

Masquerade is thought to have started as early as the 14th Century in balls celebrating royalty during carnival seasons (a period before lent). By the 16th century these had become public festivities, though mostly for the upper classes. In Venice such events were taken too particularly enthusiastically. The public ate and danced, wearing masks and costumes, or dark black cloaks called domino’s.  The Venetian love of Masquerade was thought to have been popularised in Europe around the 18th century. As the first form of fancy dress party to hit European shores, it made quite an impact.  From early in the century, Masquerade events were held in theatres and public gardens, with individuals buying tickets to attend. By 1772 an entire building called the Pantheon was built so events could occur indoors. Some opted for less theatrical costumes, with ladies wearing a classic evening dress with the traditional Venetian cloak, and a mask. Others were much more exciting, taking inspiration from theatre, other cultures and history.

But Masquerade was a conflicted past time. Some saw it as highly immoral, encouraging poor standards like sexually indecent behaviour. An entire movement known as the ‘anti-Masquerade movement’ (surprisingly), sprang up, propounding the evils of such events. So, by the early 19th century Masquerade had peaked and fallen.

Queen Victoria herself is thought to have been a major fan of fancy dress, helping to maintain the popularity of such occasions.

However, the joys of fancy dress survived and began to spread, finding new forms. It became fashionable to give big fancy dress parties. Whilst today pretty much anything goes for fancy dress- exemplified by the wonderful and bizarre array found at college Entz (or Bops), back then, things were more ‘proper’. Whilst a wide range of historical and exotic outfits were worn, ladies would incorporate this into an evening dress made for them, perhaps by the new companies which had sprung up for this purpose, or which they had made themselves. So the norms of the day, such as restrictions on the baring of skin and the proper decorum for dress, had to be obeyed. Like today there were often themes. Dressing as historical figures or in the style of past worldwide era’s was very popular. Some took more abstract routes, such as dressing as seasons or natural phenomena like darkness. In magazines of the time inspirations for fancy dress were regular features, even books were created.

Queen Victoria herself is thought to have been a major fan of fancy dress, helping to maintain the popularity of such occasions. Victorian high society was known for big, grand balls. Partly, this was tied up in the ‘season’ a period where upper class young women attended balls and parties (not just fancy dress ones) to present themselves as suitable candidates for marriage. High society ladies hosted these balls, marking their status, good taste and wealth. The beauty and taste of partygoers was remarked upon both throughout high society, and in the press. Things snowballed at the local level too: by the late 19th century fancy dress was becoming increasingly popular for smaller gatherings, and for a wider range of celebrations, like children’s parties. Today fancy dress seems very much anyone’s game, from teenage parties, to middle-aged do’s reminiscing of decades past. Plus, we now have greater freedom in the forms fancy dress can take… no longer need we uphold such strict dress standards like ladies wear evening gowns as part of their costume. Fancy dress still has implications for subversion though, and just as then society has its conceptions of what is, sometimes rightly, sometimes wrongly, ‘crossing the line’.