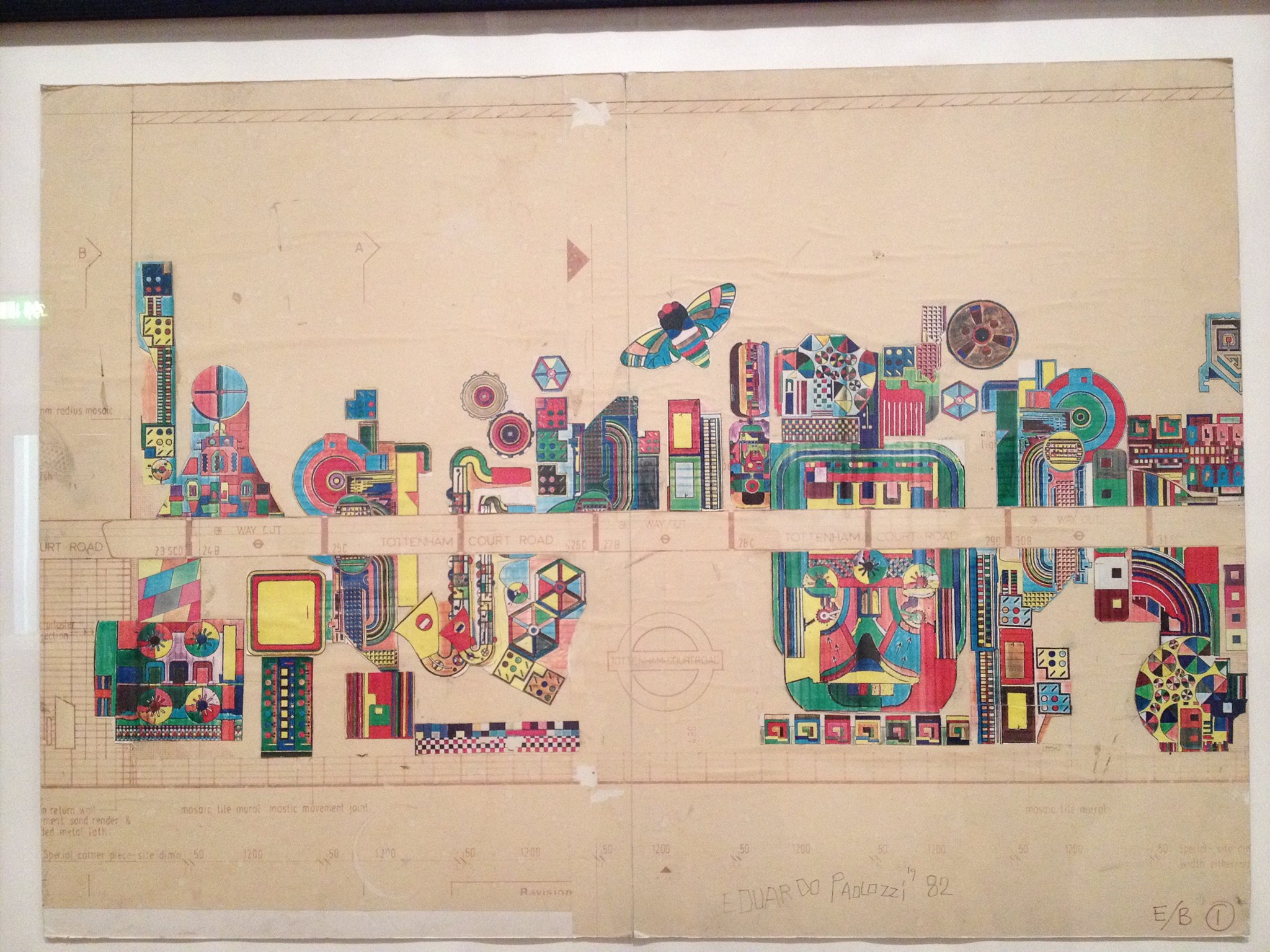 As one gets off the Tube at Tottenham Court Road Station, it is virtually impossible not to notice the colourful (or ‘in-your-face’, depending on your colour tolerance) mosaics populating the walls. They were created by Eduardo Paolozzi in 1982-84, and were meant to be a ‘surprising constellation of objects and ideas’. The retrospective running until  14th May at Whitechapel Gallery showcases more of such objects and ideas, from the artistic production of one of the pioneers of Pop Art.

Arranged across multiple floors, the exhibition does justice to the variety of media with which Paolozzi experimented. Featuring the exhibition are sculptures, drawings, paintings, tapestries (more on those later), screen prints, textiles, and collages. Paolozzi’s creativity runs across several materials and art forms, testifying an extremely versatile and nature and wide-ranging interests.

While sweeping across several media, in Paolozzi’s art certain distinctive traits can be detected, which the visitors have the pleasure to discover as the exhibition unfolds before their eyes. The distinctive feature emerging from this retrospective is the aggregatory nature of Paolozzi’s work. Indeed, a journey can be traced linking several of his artworks under the label of ‘aggregation’, in both the physical and conceptual meaning of the term.

The artist’s experiments continued in the ’60s the capacity of ‘supervising, collaborative engineer’, rather than actual craftsman.

Starting from assembling pieces of concrete to create tribal-looking sculptures, he then moved on to his post-war bronzes characterised by ‘encrusted surfaces’, such as ‘Horse’s Head’ (1946). Aggregation and combinatory elements also are prominent aspects of his ‘Bunk!’ lecture at the Institute of Contemporary Arts (ICA) in 1952, where he projected a series of seemingly disconnected images of popular culture, from magazines to adverts, to an extremely puzzled audience. This is now considered the opening of Pop Art, but at the time it must have felt like an ‘onslaught of images’, as curator Daniel F. Herrmann notes.

The artist’s experiments continued in the ’60s the capacity of ‘supervising, collaborative engineer’, rather than actual craftsman. The works from this decade include brilliant tapestries that are real explosions of colours, as well as equally vibrant screenprints. Once again, the works are conglomerates of several elements, combining dynamic lines, vigorous colours, shiny surfaces, and every possible kind of shape. The screenprints of the series ‘As is When’ (1965) also include some text, and are accompanied by enigmatic titles. It would have been intriguing to learn more about why Wittgenstein is to prominent in Paolozzi’s works from this period, but unfortunately the exhibition does not shed much light on this.

Similarly aleatory is his tapestry ‘The Withworth Tapestry’ (1967), dominating the second, smaller room of the exhibition, and facing the screenprints. Raging form the silhouettes of Mickey Mouse and Minnie to intricate and sinuous lines, to elementary geometric shapes, the tapestry is a tessellation of modernity. Shouting with Pop colours, it is what Andy Warhol would have produced had he lived in the Middle ages.

Shouting with Pop colours, it is what Andy Warhol would have produced had he lived in the Middle ages.

The journey through aggregation continues on the second level of the exhibition, where Paolozzi’s mature works are displayed. Some pieces from his 1971 retrospective at Tate Britain define him as an irreverent enfant terrible of the ’70s, and act as ‘an acerbic response to an art establishment against which he positioned himself’. The provocative nature of works such as ‘100% F*ART’ (1971), a few piles of aluminum ingots stacked on top of each other, reminded me of his contemporary Pietro Manzoni. This made the allegedly groundbreaking art of Paolozzi grow slightly pale, if compared to the works of an artist who had exhibited his own excrements in boxes (‘Merda d’artista’) ten years earlier (1972). While not so shocking, Paolozzi’s works from the early ’70s are undoubtedly a turning in his career, defining his more provocative stance in the artistic panorama of the time.

As the exhibition comes to a closure, the works on display become slightly more monochromatic, and we witness a return to sculpture. Once again, however, an element of combination/aggregation can be seen: towards the end of his career, Paolozzi would assemble and destroy his creations over and over again, rejecting the traditional notion of “copy and imitation”, stating with his practice that ‘making art never stopped’. I think this is what I took away from this compelling retrospective.

No crowning glory for Wills and Kate

On the Road Yet Again in We’re the Millers

Stunning tale of love as it is actually