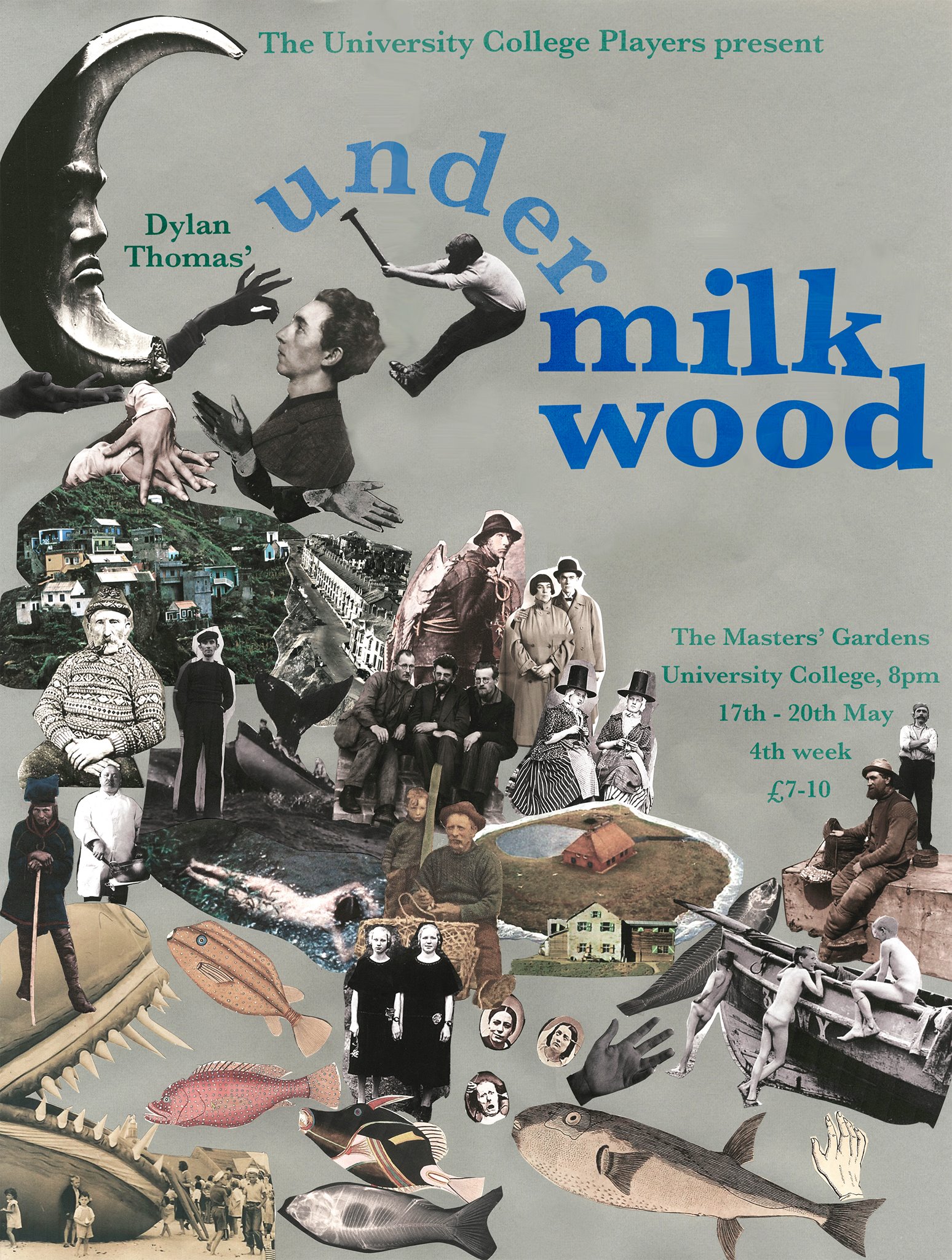 Bringing a radio play to life on stage is no small task, especially so with a piece as well known and loved as Under Milk Wood. Hailed as the ‘greatest drama ever written for radio’ by the Telegraph, Dylan Thomas’ comic and poetic masterpiece invites the listener to spend a day in the company of the inhabitants of Llareggub (read it backwards), a fictional Welsh village. Rather than articulating any distinct sense of plot, the two narrators instead introduce us to a myriad of absurd character vignettes. Many of these are primarily occupied with the banalities of village life, made more dynamic through the colourful and eccentric characters. Others stray towards the more comically ludicrous, varying from cooking cats to softcore crystal ball pornography (for want of a better phrase). It is a delightful script and there are many laughs to be had.

Director Victoria Gawlik is all too aware of the difficulties of staging a plotless, densely poetic radio play in her introductory blurb to this production, which is showing in University College gardens this week. Acknowledging that this is a ‘play to be heard’, Gawlik explains that the production’s solution to staging this radio play is through the use of sound and location. The use of pre-recorded voice and music, alongside the use of radio microphones, aims to immerse the audience in the surreal world of the play, whilst paying homage to its original form and taking full advantage of the sounds created by the actors’ voices. The Master’s Garden is also sure to act as the perfect setting for a play that focuses so much on our connection to the natural world.

If you can get tickets, I’d thoroughly recommend seeing Under Milk Wood in its intended setting, where I am sure that the humorous tone of the play would be done justice.

It is a huge shame, then, that on the night I saw this production, weather conditions forced it to move inside to the Univ Chapel – an unfortunate setting on account of the oddly shaped traverse stage space and muddy acoustic. The sound design could not be transferred, and as such was lost. Many of the flaws in the production I saw were largely on account of this last minute change of venue. I have no doubt, given the abundance of talent in the production team, that the sound design would work incredibly well as a solution to staging such a piece. If you can get tickets, I’d thoroughly recommend seeing Under Milk Wood in its intended setting, where I am sure that the humorous tone of the play would be done justice. However, this is not the production I saw, and removing these layers of design exposed some crucial flaws in the staging of the text that would likely be present in this production regardless of its setting.

The cast should be commended for the deftness with which they dealt with the challenge of a long and thin traverse. Despite only having one entrance, their movements around the stage were unlaboured, and sight line issues were few and far between. The comedy in Thomas’ text was enhanced by moments of physical comedy, with Adam Diaper engaging in a particularly amusing state of intimacy with a policeman’s hat towards the start. Mati Warner’s impeccable comic timing brought a vibrancy and amiability to Willy Nilly that made the character a genuine pleasure to watch, and Anousha Al-Masud, in her depiction of Captain Cat’s dead lover Rosie, handled the character with great emotional sensitivity, creating the most heart-wrenching moment of the evening. Undeniably the most enjoyable thread was that of Mr Pugh, played by an affable Albert McIntosh, constantly attempting to poison his wife, played by Emelye Moulton. Moulton was the stand-out performer of the evening, showing herself to be versatile in a range of characters from the touchingly fragile and detached wife of a dead farmer, to an impressively physical range of batty old women. Memorable performances were too numerous to mention, and despite some issues with projection and annunciation, the entire cast delivered in their vibrant depictions of character.

Costume designer Flo Barker did a fantastic job in defining and differentiating the zany villagers, employing a large arsenal of varying outfits that were changed with startling smoothness. Lighting designer Linette Chan should also be praised for her impromptu rig, using a single LED fixture to transform the chapel into a number of scenes and colours, effectively using shadow to add depth to the traverse.

The production’s use of music was confusing at times – an organ interlude, presumably intended to capture the longing of Captain Cat, went on for far too long and added nothing to the scene. The fact that the stage was left static at this point was also particularly baffling. There were nonetheless some genuinely beautiful moments: Genevieve Arnaud’s song as Polly, singing about her lost loves, was particularly well executed and added a tender contrast to the chaotic comedy of the play.

The main flaw in this production is the approach to the narration. With the radio play, the narrators are the listener’s only window into the dramatic world, and as such are essential to the introduction of character and representation of the sonorous poetic language. Whilst Meg Harrington and Francis Kerrigan can’t be significantly faulted in their delivery (perhaps they could have slowed it down a little), it was abundantly clear that very little work had been done on the poetic sounds which, in the case of Under Milk Wood, are essential to the success of any production. Neither did the narrators have any distinct sense of character, which in turn made the few moments of interaction with the larger-than-life inhabitants of Llareggub fairly purposeless. This cannot be attributed to the actors – rather it was an oversight on the director’s part that turned the narrators from being a window into the world into a wall between it and the audience.

All in all, Under Milk Wood was a pleasant evening out despite the last minute change in venue, and the entire team should be proud of their ability to readapt the piece to a completely different setting with such relative ease. Unfortunately, the play suffers from some serious issues in pace and trajectory, and whilst the humour created by the cast’s bold depictions of character counteract this to a certain extant, Under Milk Wood is clearly a ‘play to be heard’, and much of the beauty of the text was lost in bringing it to stage. Nonetheless, if you get a chance to watch it in its intended setting with its full technical set up, you’re in for a vibrant and enjoyable show.

Under Milk Wood runs at University College until Saturday 20th May.