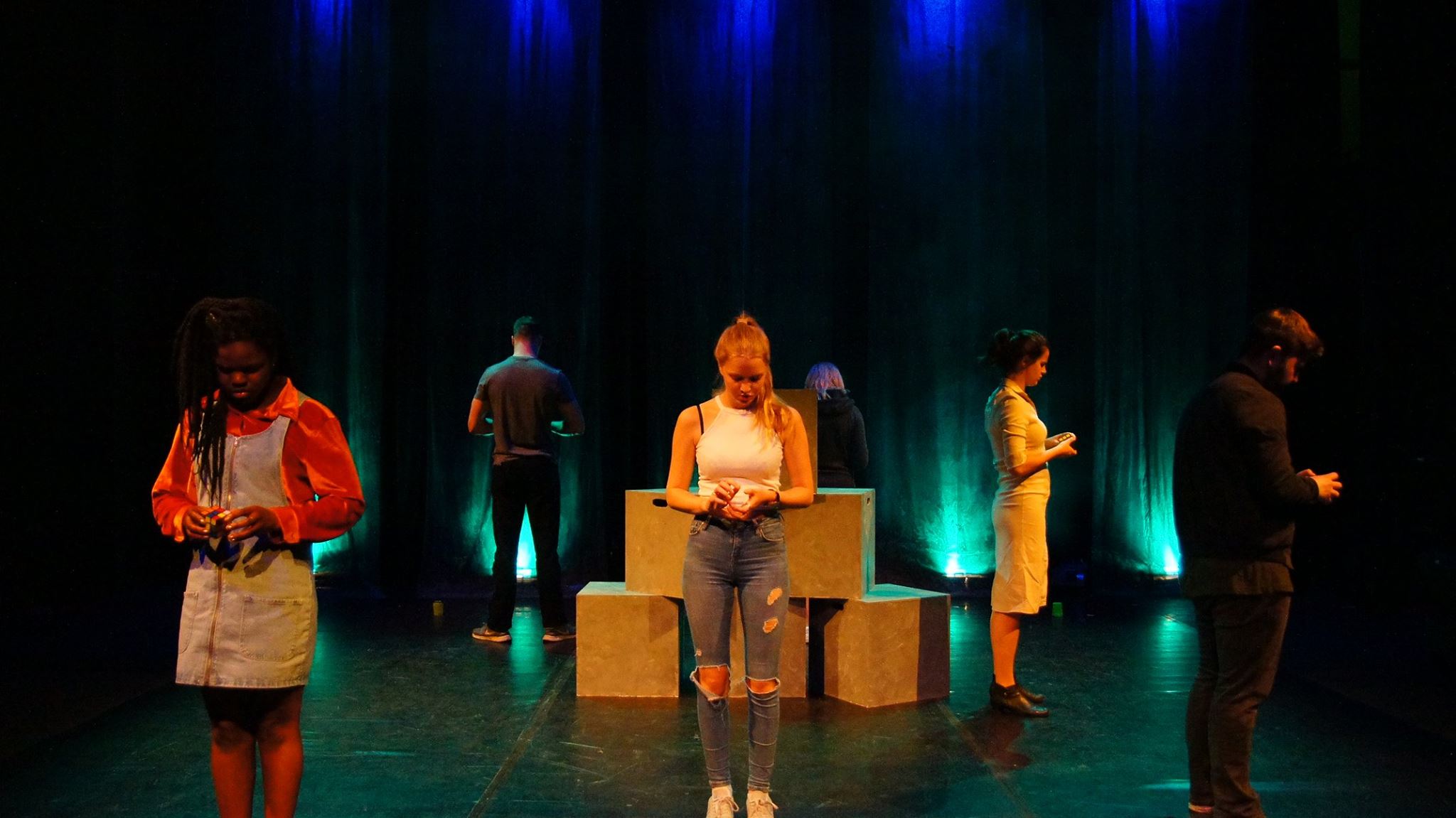 Lucy Hayes’ production of Pomona opens with the superbly dead-pan Joe Peden, munching chicken nuggets, and holding forth on the wonders of Indiana Jones. At the centre of the stage is a figure in an octopine mask, toying with a rubix cube, one of several piled by its feet.  Pomona is a dystopian thriller-cum -dark comedy, that only gets stranger as it progresses. Emily Pullen’s set strips the O’Reilly back to its bare bones with a simple but effective use of space- with concrete blocks forming a deconstructed rubix cube, a motif of the piece, hinting at the complex and interlocking structure of the play. Eerie lighting and a subtle soundscape propel us into a grim, urban landscape- moving us from brothels to the wasteland of the titular Pomona, an abandoned concrete island that actually exists in real life Manchester.

This drama follows several characters through various twists and turns, featuring Charlie (James Tibbles) an excitable security guard turned hesitant hit man, who watches over Pomona. A Dungeons and Dragons fanatic in his spare time, he devises a role play game that imagines atrocities taking place on the island. Whilst playing this game, he generates a tale of identical twin sisters- with one sister, Ollie (India Phillips), searching for her lost twin. Trying to pay off mysterious debts, Ollie becomes a sex worker, only to be subsumed in the seedy world of Pomona.  The cast show a breadth of accomplished performances, with sensitive direction from Lucy Hayes and Finlay Stroud. Hugo McPherson gives a nuanced performance as Charlie’s fellow guard Moe , and they work well as a comic duo-  Tibble’s characterisation of Charlie’s blithering bliss was,  if  peppered with a few garbled lines, on the most part amusing.  For such a dark piece, there are moments of levity, Miranda Collins brings a vulnerability and a wearied kindness that is particularly impressive. Her understated portrayal of Fay, an ill abused sex worker, shines in her agonising and poignant interaction with Moe, who movingly admits his history of hurting others.  As Keaton, the strange and enigmatic friend of Charlie, Francesca Amewudah-Rivers presents a quiet, simmering intensity, with an unwavering steely gaze- her stillness works well. Other characters are also strong if slightly one-note in places, with a recourse to shouting and the tengthy monologues could slump in the middle, which caused the action to lag slightly.

Whether Charlie’s game is reality, or dark fantasy, is ambiguous, and the real and the surreal begin to blur.

The play has a strange circular structure, exploding linear time and logic- wherein the order of events is unclear, and reality begins to cave in on itself. The round shape of the island, Pomona, becomes a symbol of the endless cycle of suffering its inhabitants experience. Whether Charlie’s game is reality, or dark fantasy, is ambiguous, and the real and the surreal begin to blur. McDowell reminds the audience of their complicity in this cruel fiction – problematizing our responses to watching such horror, exploring how we vicariously experience it in the comfort and safety of a seat at the theatre. This play tests how far our sympathy really goes; it questions our ability to treat horrific suffering as a story for our consumption and pleasure.

The violence that the characters often describe is not physically represented, aside from a few a lacklustre and unconvincing stage punches, denying us sensational enjoyment. Moreover, I was not persuaded by the thrust stage, the piece accommodated spectators on the left or right sides but they were condemned to viewing the sides of the cast’s heads for the most part. This seemed to add to a motif of cast members facing away from the audience, which I found puzzling.

I had hoped to see more of the grottiness of the original material. I was impressed with some fantastic physical theatre, particularly in the ironic reimagining of the cup song from Pitch Perfect as a violent and murderous hunt. It is choreography like this that makes the piece sparkle, and gives us a glimpse of the nightmarish spectacle I had anticipated.  Pomona returns to the ordinary even at its most surreal- at the end, Peden reappears in the form of a flapping and cantankerous seagull, delivering harsh truths. This production of Pomona can slacken at points but you have to admire its obscutiy, the brilliance of its cast-and Hayes’ ambition in taking it on. With some excellent performances, it’s a play that gains momentum with every scene.